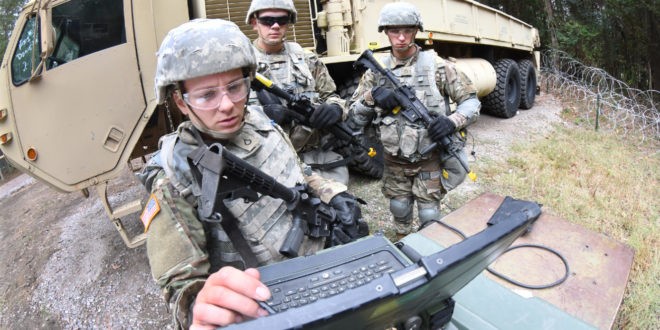 In an era where technology is the key driver enhancing capabilities across the military, the soldier remains as crucial as ever for achieving mission success. Some of the missions the soldiers perform can take weeks, away from in difficult terrain like deserts and mountains which requires maintaining an incredibly high level of physical fitness. Around the world, armies are recognizing the importance of maximizing the effectiveness of Soldiers physically, perceptually, and cognitively. As militaries are expected to operate in diverse environments – from Arctic to urban landscapes – developing materials, technologies and capabilities that enable soldiers to survive and thrive have become ever more important.

The vision for the future soldier is to be combat effective and also highly mobile, adaptive, networked, sustainable with total battlespace situation awareness and information assurance. Therefore, he is equipped with night-vision goggles, radios, smartphones, GPS, infrared sights, a laptop as well as batteries to power them.

The military’s increasing reliance on digital technology and continuous increase in software-based systems and software-defined systems require that future soldiers become software experts. This will enhance the military’s capability to operate, fix and maintain its own systems. The military depends on software just as much as it does on its equipment and the dearth of developers is a readiness failure. Tactical-level maintenance on vehicles and other equipment is a critical component of modern warfighting. Uniformed software developers will also allow units to generate better, more accurate reports and allow leaders to focus energy and attention on the human issues instead of spending hours each week updating reports by hand.

The US Army took another step toward getting more code-savvy soldiers in its ranks by embedding its first cohort of developers at its software factory located at the Austin Community College. The factory will help produce both new applications for Army usage and train soldier-coders to find ways to enhance operations through technology. Leaders across the Army have said they want the service to transform from the “Industrial Age” to the “information age” and using software is a key part of that. Similarly, under another modernization mission, Project Convergence, the Army has relied on getting code-savvy soldiers in the field to connect weapons systems to increase their targeting speed.

Future soldiers will also require knowledge and tools to rapidly convert terabytes of data (generated from a broad array of sources ranging from battlefield sensors to captured enemy material to publicly available information) into intelligence — and, ultimately, successful operations.

The US Army’s efforts to leverage the tactical cloud to process data on the edge will get information into soldiers’ hands more quickly, allowing them to make decisions in near-real-time. This could influence the course of combat and save lives. “If you know your enemy and know yourself,” the legendary Chinese general Sun-Tzu wrote in the sixth century B.C., “you need not fear the outcome of one hundred battles.” In 2020, the US Army is finding that a new technology, cloud computing, is essential to both kinds of knowledge.

However, there are several challenges to using the cloud on a tactical battlefield, where reliable network connectivity is never a sure thing. These include limited bandwidth, long network downtime, satisfying Mission-driven goals, and heterogeneous data sources. Some applications are unique to tactical environments such as Target Tracking and Localization (TTL) and Persistent Surveillance. They often come with stringent delay requirements and involve real-time or near real-time objectives.

To maximize effectiveness, full-stack data scientists need to directly support tactical units and not just headquarters and staff removed from combat operations. In future conflicts, the technical talent must be co-located or embedded within a unit to provide the tactical advantage when speed of action and an understanding of operational requirements are critical — intelligence collection and the application of precision fires are but two examples that require real-time, co-located data science support.

On future battlefields, data scientists could develop and modify computer vision algorithms to evaluate terrain and enemy locations. They could bring about a strong understanding of the broader operational context, could then coordinate to confirm the enemy’s position with intelligence and fires staff. This would short-circuit the laborious and time-intensive process of manual terrain evaluation.

Currently, full-stack data scientist provides end-to-end analytical solutions and does so by bringing an array of new skill sets, spanning infrastructure, data engineering, machine learning, DevOps, application programming interfaces development, and data visualizations, to the table. In the future soldiers need to develop full-stack data scientist capability which will eliminate communication challenges of the environment and understanding of rapidly changing context between soldiers and data analysts. Data analysts are also required to communicate recommendations and critical decision points in a manner that enables commanders to make the right decision at the right time, with minimal interference from technical complexities. For the army, it will also generate the largest return on investment, both in terms of human capital and mission effectiveness.

To develop a technically capable workforce with software expertise and full-stack data science within its ranks, Army requires new recruiting processes to fast-track development, new curriculum, and training tools to provide current soldiers with the new skills and then new retention efforts

In future conflicts, the technical talent must be co-located or embedded within a unit to provide the tactical advantage when speed of action and an understanding of operational requirements are critical

@Rajesh Uppal@idstch
Previous US India Defense Cooperation deepening from buying-selling and Intelligence Sharing to Strategic Partnership to counter China Threat
Next Technology forecasting to help militaries arm, organize and train itself for future conflicts around 2040 to 2050.