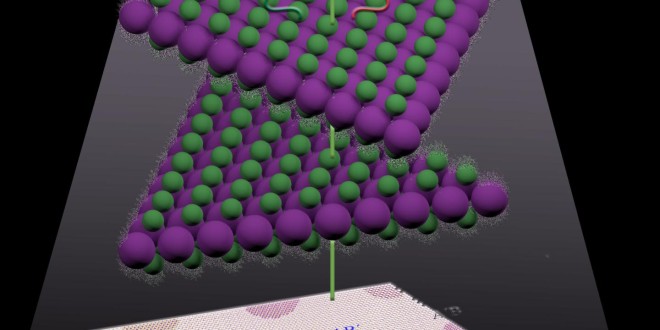 When two atomically thin two-dimensional layers are stacked on top of each other and one layer is made to rotate against the second layer, they begin to produce patterns — the familiar moiré patterns — that neither layer can generate on its own and that facilitate the passage of light and electrons, allowing for materials that exhibit unusual phenomena. For example, when two graphene layers are overlaid and the angle between them is 1.1 degrees, the material becomes a superconductor.

“It’s a bit like driving past a vineyard and looking out the window at the vineyard rows. Every now and then, you see no rows because you’re looking directly along a row,” says Nathaniel Gabor, an associate professor in the Department of Physics and Astronomy at the University of California, Riverside.

“This is akin to what happens when two atomic layers are stacked on top of each other. At certain angles of twist, everything is energetically allowed. It adds up just right to allow for interesting possibilities of energy transfer.”

Stacking layers of nanometer-thin semiconducting materials at different angles offers a new approach for designing the next generation of energy-efficient transistors and solar cells. The atoms in each layer are arranged in hexagonal arrays; when two layers are stacked and rotated, atoms in one layer overlap with those in the other layer and can form an infinite number of overlapping patterns. This is like the Moiré patterns that result when two screens are overlaid and one is rotated on top of the other.

To bring it all under one roof, Nathaniel Gabor of University of California, Riverside and physicist Justin C. W. Song of Nanyang Technological University, Singapore, have proposed this field of research be called “electron quantum metamaterials” and have just published a perspective article in Nature Nanotechnology. “We highlight the potential of engineering synthetic periodic arrays with feature sizes below the wavelength of an electron. Such engineering allows the electrons to be manipulated in unusual ways, resulting in a new range of synthetic quantum metamaterials with unconventional responses,” Gabor says.

Metamaterials are a class of material engineered to produce properties that do not occur naturally. Examples include optical cloaking devices and super-lenses akin to the Fresnel lens that lighthouses use. Nature, too, has adopted such techniques — for example, in the unique coloring of butterfly wings — to manipulate photons as they move through nanoscale structures. “Unlike photons that scarcely interact with each other, however, electrons in subwavelength structured metamaterials are charged, and they strongly interact,” Gabor says. “The result is an enormous variety of emergent phenomena and radically new classes of interacting quantum metamaterials.”

Two-dimensional (2D) materials such as graphene have unique electronic, magnetic, optical, and mechanical properties that promise to drive innovation in areas from electronics to energy to materials to medicine. Graphene has some special electronic properties:  It can easily support either electrons or holes (effective positively charged “lack of electrons”) for conduction (unlike a semiconductor, it has no energy gap, but it’s a semimetal rather than a metal), and the relationship between kinetic energy and momentum of the charge carriers looks like what you see for massless relativistic things in free space (like light).

Bilayer is made by taking two sheets of graphene and placing them one on top of the other. The two layers talk to each other electronically.  In ordinary graphite, the layers are stacked in a certain way (Bernal stacking), and a Bernal bilayer acts like a semiconductor.  If you twist the two layers relative to each other, you end up with a Moire pattern so that along the plane, the electrons feel some sort of periodic potential.

It is possible to add or remove charge from the graphene layers by using an underlying or overlying electrode – this is the same mechanism behind the field effect transistors that underpin all of modern electronics.

If you have really clean graphene and twist the layers relative to each other just right (“magic angle”), the system becomes very insulating when you have just the right number of charge carriers in there.  If you add or remove charge away from that insulating regime, the system apparently becomes superconducting at a temperature below 1.7 K.

At this “magic” angle, the energy dispersion of electrons becomes flat and the interaction parameter becomes large. By tuning the carrier density, the twisted bilayer graphene stack becomes a Mott insulator. These properties are similar to those of cuprates and other high-temperature superconductors.

Graphene has two key advantages compared to these materials. First, the band structure of monolayer graphene is simple and well understood. Second, the Fermi energy can be tuned by simply adjusting the voltage applied to the gate electrode in order to characterize the whole phase diagram of electrons. Twisted bilayer graphene represents a promising platform for understanding the elusive properties of unconventional superconductivity.

Columbia University researchers report a major advance that may revolutionize the field, a “twistronic” device whose characteristics can be varied by simply varying the angle between two different 2D layers placed on top of one another. In a paper published online in Science, the team demonstrated a novel device structure that not only gives them unprecedented control over the angular orientation in twisted-layer devices, but also allows them to vary this angle in situ, so that the effects of twist angle on electronic, optical, and mechanical properties can be studied in a single device.

Led by Cory Dean (physics, Columbia University) and James Hone (mechanical engineering, Columbia Engineering), the team built upon techniques that they previously pioneered to mechanically layer graphene and other 2-D materials, one on top of another, to form new structures. “This mechanical assembly process allows us to mix and match different crystals to construct entirely new materials, often with properties fundamentally different from the constituent layers,” says Hone, leader of Columbia’s Materials Research Science and Engineering Center (MRSEC), which investigates the properties of these heterostructures. “With hundreds of 2-D materials available, the design possibilities are enormous.”

Recent studies have shown that rotational alignment between the layers plays a critically important role in determining the new properties that arise when materials are combined. For example, when conducting graphene is placed on top of insulating boron nitride with the crystal lattices perfectly aligned, graphene develops a band gap. At non-zero angles, the band gap disappears and intrinsic graphene properties are recovered. Just this past March, researchers at MIT reported the groundbreaking discovery that two stacked layers of graphene can exhibit exotic properties including superconductivity when the twist angle between them is set to 1.1 degrees, referred to as the “magic angle.”

In previous approaches to fabricating structures with rotationally misaligned layers, the angle was set during the assembly process. This meant that once the device was made, its properties were fixed. “We were finding this approach frustrating, since very small errors in alignment could give entirely different results,” says Dean. “It would be great to make a device in which we could study its properties while continuously rotating its layers and so the question was, how to do this?”

The answer, the Columbia researchers realized, was to take advantage of the low friction that exists at the interface between the layers, which are held together by van der Waals forces that are much weaker than the atomic bonds within each layer. This low friction? which makes 2-D materials very good as solid lubricants? makes controlled assembly at a desired angle very difficult. The Columbia group used the low friction characteristic to their advantage by designing a device structure in which, instead of preventing rotation, they could intentionally and controllably vary the rotation angle.

The team used graphene/boron-nitride heterostructures to demonstrate the reach of their technique. In these structures, when the layers are not crystallographically aligned, the materials preserve their original properties (e.g., graphene will have a semi-metallic character) but when the layers are aligned, the properties of graphene change, opening an energy gap and behaving as a semiconductor. The researchers showed that this fine-tuning of the heterostructure’s properties affects its optical, mechanical, and electronic responses.

“Notably, we demonstrated that the energy gap observed in graphene is tunable and can be turned on or off on demand just by changing the orientation between the layers,” says Rebeca Ribeiro, who led this work as a post-doctoral researcher at Columbia and is now a CNRS research scientist at the French Center for Nanoscience and Nanotechnology (C2N-CNRS). “The tuning of this energy gap not only represents a major step toward the future use of graphene in varied applications, but also provides a general demonstration in which the device properties of 2-D materials are dramatically varied with rotation ”

From a technological point of view, the ability to tune the properties of a layered material by varying the twist angle provides the possibility for a single material platform to perform a variety of functions. For example, electronic circuits are built from a finite number of components including metallic conductors, insulators, semiconductors, and magnetic materials. This process requires integration of a variety of different materials and can pose a significant engineering challenge. In contrast, a single material that can be locally “twisted” to realize each of these components could enable significant new engineering opportunities.

In addition, the ability to dynamically tune a system with mechanical twisting offers a new switching capability that could enable entirely new device applications. For example, traditional switches typically vary between two well-defined states (on or off, magnetic or not, etc.). The Columbia platform could enable the possibility to switch between an arbitrary number of complementary states.

Dean adds, “Our study demonstrates a new degree of freedom, namely rotational orientation between layers, that just doesn’t exist in conventional semiconductor heterostructures. This is a rare occasion in the semiconductor field where we are truly forging a new path, and opens the door to a whole new field of research where material properties can be varied simply by twisting the structure.

Dean and Hone are now using their new technique to study other combinations of 2-D materials in which the properties can be tuned by angular alignment. They are looking particularly at the recent discovery of superconductivity in twisted bilayer graphene and exploring whether it may be a general feature of twisted bilayers made from arbitrary 2-D materials.

Now, a team led by researchers from the Department of Energy’s Oak Ridge National Laboratory has come up with a novel method for characterizing these various stacking patterns, by studying the vibrations between two layers as they are twisted in different directions. The team employed a method called low-frequency Raman spectroscopy to measure how the layers vibrate with respect to each other and compared the frequencies of the measured vibrations with their theoretically-predicted values.

Raman scattering is an optical method for probing atomic vibrations in a material based on the scattering of monochromatic light from a laser. Whereas conventional Raman spectroscopy can probe more than approximately three trillion atomic vibrations per second, low-frequency Raman spectroscopy detects vibrations that are an order of magnitude slower. The low-frequency technique is sensitive to weak attractive forces between layers, called van der Waals coupling, and can provide crucial insight about layer thickness and stacking – aspects that govern fundamental properties of 2D materials.

This study provides a platform for engineering two-dimensional (2D) materials with optical and electronic properties that strongly depend on stacking configurations.

Nanophotonics or Nanoscale Quantum Optics for Quantum Computers, and Networks