Energy sector has become one of the attractive targets for cyber attackers. Hackers already target the energy sector more than any other part of U.S. critical infrastructure, according to the most recent government report. Energy sector is also a crtitical infrastructure and and a prime target for sabotage by adversaries. The starting point in serious cyber warfare may well be to trip the power stations which power the data centres involved with the core routing elements of the network. Without electricity from civilian power plants, the most advanced military in world history could be crippled. Military is also giving thrust to renewable energy  to significantly improve national security.

One of the obstacles to total green energy reliance is that many sources of carbon-neutral energy, such as solar and wind power, are unpredictable and intermittent. Wind turbines and solar panels offer low power density and intermittent operation, thereby reducing their usefulness and reliability as a direct form of prime power generation for high continuous or pulsed power loads. Fuel cells offer high energy density but low power density making them a bit more reliable but still not a direct form of power generation in most cases

A possible solution is to build energy storage facilities that can charge up while excess energy is being generated, then discharge when demand overtakes supply.  Battery-based grid-storage facilities using a range of battery types have already been built for this reason, but there is still a need to develop an economical, safe, and long-term solution.

Energy storage systems provide a wide array of technological approaches to managing  the  power supply in order to create a more resilient energy infrastructure and bring cost savings to utilities and consumers. Some of the  alternative electrical generation sources, are  solar panels, fuel cells, flywheels, wind turbines, batteries, and capacitors be installed and intelligently monitored and controlled to ensure power delivery at all times to the critical loads..

“Energy storage fundamentally improves the way we generate, deliver, and consume electricity. Energy storage helps during emergencies like power outages from storms, equipment failures, accidents or even terrorist attacks. But the game-changing nature of energy storage is its ability to balance power supply and demand instantaneously – within miliseconds – which makes power networks more resilient, efficient, and cleaner than ever before,” according to Energy Storage Association.

Collaborative efforts at Argonne led to the development of a new electrolyte formulation for national security agencies. One of these focused on increasing the energy density of a satellite energy storage system. Electric Fuel Cells: Argonne developed a specific cathode material for NASA’s Jet Propulsion Laboratory. The coating was specifically developed to improve fuel cells for electric vehicles.

The U.S. military is already working toward this goal. Congress has decided that military facilities must get 25 percent of their energy from renewable sources by 2025. To meet that requirement, also by 2025, the department wants to be able to generate 3 gigawatts of renewable power every year. (A nuclear power plant operating at peak capacity produces about 1 gigawatt.)

Military enthusiasm for energy storage applications is at an all-time high, according to one supplier close to the industry. “There’s no doubt that their interest is strong,” said Ryan O’Keefe, senior vice president of business development at the power conversion systems maker Ideal Power. Energy storage is seen as one of a number of technologies that can help military chiefs offset costs and risks while allowing troops to operate more independently in the battlefield, he said. “They identified quite some time ago that their military bases, wherever they are, are at the mercy of the electric grid. The military is clearly in planning mode for how to make their operations resilient.”

Ideal power has unveiled a project with EnerDel, a lithium-ion battery maker and energy systems integrator, to create a mobile hybrid solar-plus-battery system for the US Air Force. The system, which is mounted on a military-grade trailer and can be towed by a humvee, is “aimed at reducing the diesel fuel used to power forward operating bases (FOBs),” said Ideal Power.

“The project supports the US Air Force’s Energy Strategic Plan, which seeks to improve the resiliency of their FOBs and reduce dependence on diesel-powered generators.” “We’re deploying these systems to minimise and eventually eliminate the need for diesel fuel being trucked into frontlines or hostile territory,” said O’Keefe. “The logistics cost is what the real motivation is here.”

Diesel fuel consumption can be reduced by about 75% using EnerDel and Ideal Power’s battery system, he said. And when that fuel is being transported in warzones, it does not come cheap. Add into the equation the fact that the ‘logistics cost’ may also include the lives of servicemen and women, and it is evident the military has a big motivation to adopt energy storage.

“Our unit will use the battery to put out a true grid-quality waveform that can be used to power even sensitive electronics without spikes in power or voltage,” said O’Keefe. Another plus is that battery systems are much less conspicuous than diesel generators in the field. “There’s nothing noisier behind enemy lines than a diesel generator running,” O’Keefe said. 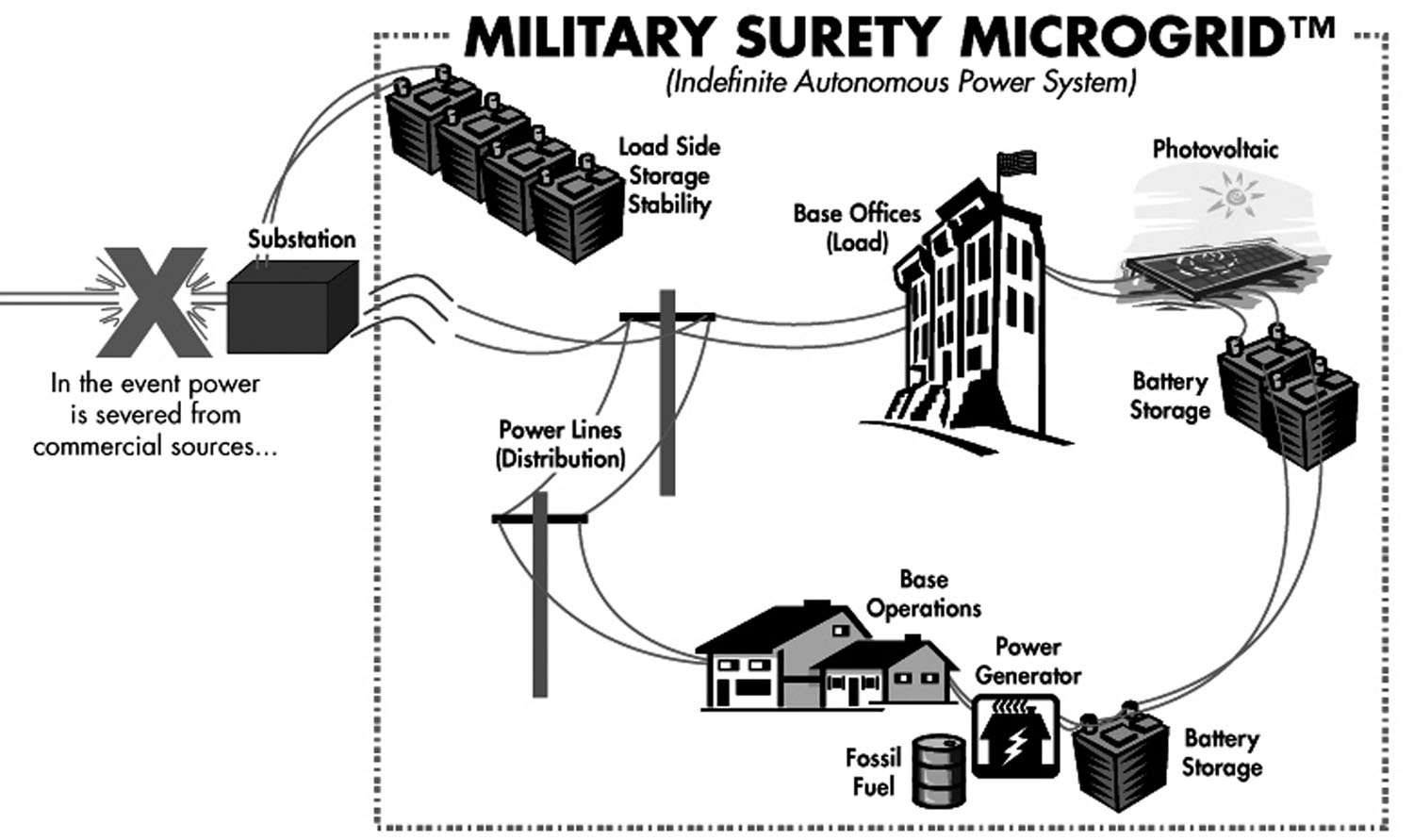 Primus Power, a manufacturer of grid-level energy storage solutions, has received a contract to develop an energy storage system that will be used with a microgrid at the United States Marine Corps Air Station (MCAS) in Miramar, California. A microgrid is a small-scale grid that includes energy generation, distribution, and loads. A microgrid might be connected to the larger grid but it also needs the ability to operate independently.

If its primary method of generating energy comes from renewables like solar and wind, then a microgrid must include storage as well. Its immunity to major grid malfunctions – whether caused by nature, human error, or sabotage – makes a microgrid an ideal solution for a military base. Here’s an early model of a microgrid, courtesy of Sandia National Laboratories:

The MCAS microgrid includes a 230kW photovoltaic array coupled with a Primus EnergyPodTM that holds up to 1MWh of electricity. The EnergyPod uses zinc-flow batteries, which offer certain advantages over other battery technologies. Zinc-flow batteries have a higher energy density than lead-acid batteries and they allow 100% depth of discharge without damaging the batteries. (With many other types of batteries, deep discharge shortens their lifespans.) Primus says that their batteries have a 20-year life, regardless of depth of discharge.

In addition to high-security applications such as the military, microgrids may also be incorporated into communities that have distributed power generation capabilities using solar, wind, and other renewable sources. Natural disasters like hurricanes Katrina and Sandy have exposed the vulnerabilities of the standard grid. As the grid becomes smarter, we could see a “meta grid” made up of a network of microgrids, much like the Internet is made up of smaller computer networks. When a disaster causes widespread damage, community microgrids could run independently, decreasing the number of people without power in the aftermath.

The UK’s Defence Science and Technology Laboratory (Dstl) has conducted testing of an advanced energy storage system in collaboration with the US Navy.  The system is known as the Flywheel Energy Storage System (FESS) and is based on Le Mans motor-sport technologies.

FESS uses high-speed and lightweight flywheels to provide high-power electrical pulses. It is intended to serve the Royal Navy’s future systems such as Dragonfire Laser Directed Energy Weapon (LDEW) and help reduce the impact of these systems to the rest of the ship. In addition, the technology will remove safety concerns related to battery-based systems. As part of the collaborative programme, the US and UK used a power hardware-in-the-loop (PHIL) approach.

The PHIL approach involved the integration of a ‘real’ FESS into a virtual ship power system that simulated a Royal Navy vessel operating in real-time. This approach can be used to develop the hardware and de-risk its integration into a real ship in a cost-effective way. Following the US trials, the FESS was delivered to the UK and tested at the Power Networks Demonstration Centre (PNDC) in Scotland.

Dstl Andrew Tate said: “This technology was originally developed by the Williams F1 team and was brought to us for potential use in defence. We saw an attractive option to bolster defence capability through the provision of more robust and futureproof power systems for naval ships. “The development of FESS and the close working we have achieved with DE&S, GKN, PNDC and our US partners has now provided a significant addition benefit in the development of real-time modelling capability and PHIL testing facilities at PNDC.”

As NREL Principal Investigator Zhiwen Ma explains, “When electric power is cheapest, electric heaters will ‘charge’ the storage modules by heating stable, inexpensive solid particles to more than 1,100 degrees Celsius. And when it’s time to discharge this energy, the hot particles will move through a heat exchanger to heat a working fluid that drives a high-efficiency closed-Brayton combined cycle attached to an electric generator.”

NREL’s proposed system will focus on scalability. For example, a 55-GWh thermal storage system is enough to power 50,000 homes for 100 hours during an outage. This scalability would not only support the DAYS goals but could also help enhance grid resilience and promote the growth of domestic energy sources.