Gallium nitride (GaN) is hot. Even hotter is a race to integrate GaN with other materials to boost GaN’s performance further.

The power electronics industry has seen the theoretical performance limit reached by silicon MOSFETs and now needs to move to a new element. GaN is a wide bandgap, high electron mobility semiconductor that has proven to be a real added value in meeting new applications. High-electron–mobility transistor (HEMT) devices based on GaN offer superior electrical characteristics and are a good successor to MOSFETs and IGBTs in high-voltage and high-switching–frequency motor control applications.

As a wide bandgap material, GaN’s forbidden band (corresponding to the energy required for an electron to pass from the valence band to the conduction band) is much wider than the one in silicon: it is, in fact, about 3.4 electron-volts, compared to 1.12 eV for silicon. Because of this high required energy, 10 times thinner materials are needed for GaN to block a certain voltage than silicon, resulting in much more compact device sizes. The higher electron mobility of a GaN HEMT leads to a greater switching speed since the charges that normally accumulate in the joints can be dispersed more quickly.

GaN-on-Diamond For Next Power Devices

GaN performance and reliability are related to temperature and joule heating effect on the channel. Substrates such as SiC and diamond integrated into GaN can improve heat management. This makes it possible to lower the operating temperature of the device. For GaN-on-SiC devices, 25 degree decrease in channel temperature would lead to about ten times increase in device lifetime. The thermal conductivity of diamonds is 14 times greater than the one of silicon, and electrical field resistance is 30 times greater. High thermal conductivity allows the spreading of heat. Diamond has a bandgap of 5.47 eV, Breakdown field of 10 MV/cm, electron mobility of 2200 cm2 Vs and a thermal conductivity of about 21 W/cmK.

GaN-on-diamond offers key parameters of high thermal conductivity, high electrical resistivity and small form factor at both device and system level. These benefits make GaN-on-diamond power amplifier devices very attractive for high power RF applications, such as commercial base stations, military radar applications as well as satellite communication and weather radars,” explained Ezgi Dogmus, technology & market analyst from Yole Développement. “This innovative device technology, in development for over a decade, is expected to be launched commercially by leading industrial actors such as RFHIC, Akash Systems and Mitsubishi Electric in the next years,” he added.

A team led by the School of Mechanical Engineering at Georgia Institute of Technology has implemented a series of results based on room-temperature surface-activated bonding (SAB) to bond GaN and single-crystal diamond with different interlayer thicknesses. The newly developed technique maximizes gallium nitride performance for higher power operations.

Integrating GaN with other materials is technically challenging. It is very difficult to bond diamond and GaN with thermally conductive interfaces and low stress at the interfaces. The modelling allows GaN devices to take full advantage of the high thermal conductivity of single-crystal diamond and thus achieve an excellent cooling effect for high-power solutions. The ambient temperature process does not induce physical stress problems due to the different coefficient of thermal expansion in other standard processes.

The new technique developed presented by the team from Georgia Tech, Meisei University, and Waseda University allows the placement of high thermal conductivity materials much closer to the regions of the active devices in gallium nitride, thus maximizing gallium nitride performance for higher power operations. GaN devices have had a widespread deployment in optoelectronics, RF, and automotive. The market about GaN-on-diamond is for defense radar and satellite communications, for now, massive production for 5G base station is ongoing as well. 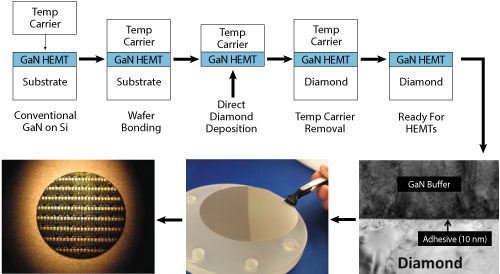 GaN on Diamond for High-Power RF

High-power radio-frequency (RF) power amplifiers are used in military and commercial applications such as radar systems, electronic warfare, and cellular base stations. Gallium nitride components, which can emit five times the radio energy of the previous technology as well as gallium arsenide based systems, are already revolutionizing radars, jammers and communications gear. “It enables more reliable systems with less weight and space, which translates into fuel savings and lower maintenance costs – saving money over the life of the system.” said Colin Whelan technical director of Advanced Technology Programs at Raytheon Integrated Defense Systems. However, gallium nitride components also create tremendous amounts of heat that must be conducted away. These GaN RF devices have very small hotspots that can generate heat fluxes 10 times that of the sun’s surface.

The GaN-on-Diamond devices also demonstrated a nearly 3 times reduction in thermal resistance. This technology should enable new generations of RF power amplifiers (PAs) that reduce size or increase power output by a factor of three compared to today’s GaN (gallium nitride) solutions. Element Six completed its first shipment of the company’s 4-inch GaN-on-Diamond wafer—the first technology of its kind to be commercially available

“GaN-on-diamond offers key parameters of high thermal conductivity, high electrical resistivity and small form factor at both device and system level. These benefits make GaN-on-diamond power amplifier devices very attractive for high power RF applications, such as commercial base stations, military radar applications as well as satellite communication and weather radars,” explained Ezgi Dogmus, technology & market analyst from Yole Développement. “This innovative device technology, in development for over a decade, is expected to be launched commercially by leading industrial actors such as RFHIC, Akash Systems and Mitsubishi Electric in the next years,” he added.

The maximum output power of GaN-based HEMTs is limited by the high temperature of the channel substrate, which degrades system performance and reliability. Diamond is currently the material with the highest thermal conductivity, and through its integration with GaN, it helps to dissipate the heat generated near the channel.

“During the HEMT device working, a large voltage drop near the gate induces localized Joule-heating. The heating area is located within tens of nanometers, which results in super-high local heat flux. The local heat flux value of GaN-based HEMTs could reach more than ten times larger than that of the sun surface. Proper heat spreading technique, such as putting diamond as close as possible to the hot-spots, could decrease the channel temperature effectively, facilitating the device stability and lifetime,” said Zhe Cheng, a recent Georgia Tech Ph.D. graduate who is the paper’s first author and now is a postdoc in UIUC.

The techniques currently used involve the direct growth of diamond deposited by chemical vapor (CVD) on GaN with a dielectric layer as a protective layer because the plasmon during diamond growth would damage GaN. The combination of the thermal resistances of the materials and the interfaces prove to play a pivotal role in heat flow management, especially for high-frequency applications for switching power supplies. The growth temperature of the CVD diamond is above700 °C. When the devices cool down to room temperature, the stress at the interfaces would crack the wafers. Additionally, the adhesion layer increases the thermal resistance of the GaN-diamond interface, which offsets for the benefit of the diamond substrates high thermal conductivity.

The research presented by the team from the Georgia Tech, Meisei University, and Waseda University used two modified SAB techniques to bond GaN with diamond substrates with different interlayers at room temperature. The two to-be-bonded surfaces are cleaned and activated by Ar ion beams, which generate dangling bonds at the surfaces. Then the two surfaces are pressed together at room temperature. The dangling bonds would form covalent bonds at the interfaces. In their work, some silicon atoms are added at the interface to enhance the interfacial bonding.

Time domain thermoreflectance (TDTR) is a pump-probe technique with an ultrafast femtosecond laser, which measures the thermal boundary conductance of the GaN-diamond interface. This technique uses an ultrafast laser modulated between 1 and 12 MHz to control the thermal penetration depth. The probe pulse is delayed between 0.1 and 7 ns compared to the pump pulse to allow the decay of the relative surface temperature to be measured through this time. A Lock-in amplifier allows extracting the read signal picked up by a photodetector. The temperature variation is measured by the reflectivity variations of a thin metal transducer (50-100 nm). The system is capable of measuring thermal conductivity between 0.1 and 1000 W/m-K and thermal boundary resistance between 2 and 500 m2-K/G. A Ti-sapphire femtosecond laser is used.

In this research presented by the Georgia Tech and Meisei University, GaN was bonded to diamond by adding some Silicon atoms at the interfaces to help chemical adhesion of the interface and lowering thermal contact conductance. Thermal boundary conductance (or TBC) describes the heat conduction between solid-solid interfaces. The related coefficient is a property indicating the ability to conduct heat across interfaces.

Two samples were used by the team. The first sample consisted of a thin layer of GaN (~700 nm) bound on a commercial single-crystal diamond substrate (grown by CVD) with a Si interlayer of ~10 nm thickness. The other sample had a GaN of ~1.88-μm thickness bonded on a commercial single-crystal diamond substrate grown by a high-pressure high-temperature method (HPHT). The thickness of GaN is polished to be thin enough for TDTR measurements . With the following sample structures, the thermal conductivity of the individual crystalline diamond substrates on the GaN-free area was measured. Then TDTR measurements were performed on the area with the GaN layer to measure the TBC of the GaN-diamond structure.

“The measured thermal conductivity of the diamond substrates was used as a known parameter in the adaptation of the TDTR data to extract the TBC when measuring above the GaN layer. Overall, there are three unknown parameters: Al-GaN TBC, GaN thermal conductivity, and GaN-diamond TBC. TDTR is a technique to measure the thermal properties of both nanostructured and bulk materials. A modulated laser beam heats the surface of the sample while another delayed beam detects the change in surface temperature through thermoreflectance and captured by a photodetector”, said Zhe Cheng.

The TBC measurements of GaN-diamond interfaces are among the high values reported in scientific literature and are influenced by the thickness of the interlayer. Due to the disorder and defects of the interfaces, weak temperature dependence of the GaN-diamond has been observed. The modeling of the device shows a relatively large GaN diamond TBC (>50 MW/m2-K). This could allow the high thermal conductivity of the single crystalline diamond to be fully used. The application mainly ranges from defense applications (Radar, satellite communications) to commercial applications (energy infrastructure, automatic cars, and 5G base station).