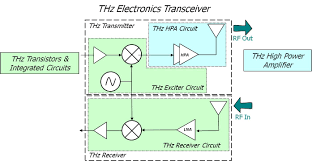 The terahertz (THz) frequency band is a fascinating and relatively unexplored part of the larger electromagnetic spectrum (EMS). The terahertz frequency range, lying between electronics and optics (300 to 3000 gigahertz frequencies), can be disruptive force in sectors as diverse as from medical imaging, biological research, pharmaceutical monitoring, manufacturing and quality control, and semiconductor testing to communications, and security and defence. Science and technologies based on terahertz frequency electromagnetic radiation  have developed rapidly over the last 30 years.

In the past, the frequency spectrum ranging from 0.3 to 3THz (or 300 to 3000GHz) was spoken as infamous “Terahertz Gap” as it lies between traditional microwave and infrared domains but remained “untouchable” via either electronic or photonic means. The conventional “transit-time-limited” electronic devices can hardly operate even at its lowest frequency; the “band-gap-limited” photonic devices on the other hand can only operate beyond its highest frequency. However continuous progress is being made for Terahertz components and devices to overcome electronic/photonic barriers for realizing highly integrated Terahertz systems.

DARPA has been interested in terahertz chips for a long while   for creating radio waves in the sub-millimeter-wave terahertz range. These waves (sometimes called T-rays), as far as the military are concerned, are a prime way of supercharging everything from radar, to imaging and reconnaissance, to ultra-high-bandwidth wireless networks.

ComSenTer is a newly formed hub for advanced wireless and sensing research founded by a consortium of industrial partners and the U.S. Defense Advanced Research Projects Agency (DARPA). ComSenTer researchers are developing technologies for the high gigahertz and terahertz spectrum that present opportunities for imaging and sensing capabilities at transmission speeds that are largely unheard of today.

ComSenTer is a newly formed hub for advanced wireless and sensing research founded by a consortium of industrial partners and the U.S. Defense Advanced Research Projects Agency (DARPA). ComSenTer researchers are developing technologies for the high gigahertz and terahertz spectrum that present opportunities for imaging and sensing capabilities at transmission speeds that are largely unheard of today. The NYU Tandon School of Engineering is joining the lead institution, the University of California at Santa Barbara, in the effort, which includes researchers from the University of California, Berkeley; University of California, San Diego; Cornell University and the Massachusetts Institute of Technology.

The scope of the project starts with devices around 140 GHz and goes up to 540 GHz—and possibly higher, according to Sundeep Rangan, professor of electrical and computer engineering at NYU Tandon and director of the research center NYU Wireless. Rangan is overseeing NYU’s participation in ComSenTer. From an engineering standpoint, “the field is definitely new,” he told FierceWirelessTech. Even the millimeter wave space is relatively new, although there’s been a huge amount of R&D the past five years. But with terahertz, “it’s probably, I would say, where we were in the millimeter wave space maybe on the order of five to 10 years ago.”

While some are invoking the 6G moniker, Rangan is not hyping it from that angle. “We still need to see what happens with 5G,” he said. They also need to determine if there’s a market need, and the project will investigate that, as well applications. The automotive space is one potential area for the very high frequencies. “As you increase the frequency, you get better resolution,” Rangan said, so it might be attractive for something like automotive radar or depth sensor systems. The researchers will also test how viable the band would be for cellular service. “I think one of the big issues that people have with millimeter wave is there still needs to be some confirmation that you will reliably get coverage in outdoor environments,” he said.

The initial millimeter wave field trials seem to suggest that people are getting more coverage than they anticipated, but whether that’s enough for consumers to be viable, “I think we’ll find out in the next five years as the systems get deployed” he said. That will also provide insight into the higher frequencies. “We’ll definitely be doing outdoor measurements as part of the [ComSenTer] project.” The project is sponsored by the Semiconductor Research Corporation, which contributed a $1.9 million grant to the efforts. The NYU team is leading the systems research, specifically developing end-to-end applications for high speed communications and imaging systems. In an encouraging move for the space, the FCC earlier this year launched a Notice of Proposed Rulemaking (NPRM) seeking comment on a plan to make the spectrum above 95 GHz more readily accessible for new services and technologies.

University of California at Santa Barbara leads ComSenTer. The $27.5 million ComSenTer Center at UCSB is headed up by UCSB professor of electrical and computer engineering professor Mark Rodwell, who leads researchers from 10 universities. Expected to cost $200 million over the five-year length of the program, the JUMP research efforts are into year two now. DARPA is funding 40% of the JUMP research efforts, while a consortium of companies pays 60%. Core companies are Analog Devices, ARM, EMD Performance Materials (a Merck KGaA affiliate), IBM, Intel, Lockheed Martin, Micron Technology, Northrop Grumman, Raytheon, TSMC, and Samsung.

DARPA has made a series of strategic investments in terahertz electronics through its HiFIVE, SWIFT and TFAST programs. “To fully exploit the sub-MMW band will require monolithic microwave integrated circuits (MMICs) that can operate up to THz frequencies. And to make these THz MMICs (or “TMICs”) will require THz transistors with maximum oscillation frequencies (fmax) well above 1 THz.

Revolutionary THz transmitter and receiver demonstrations are the ongoing focus of a portfolio of programs within the DARPA. Through the sponsorship of the Terahertz Electronics and related programs, a technology base is being established to effectively generate, detect, process, and radiate sub-MMW frequencies to exploit this practically inaccessible frequency domain for imaging, radar, spectroscopy, and communications applications. Transistors, integration technologies, power amplification, and their precision metrology are the key elements under active investigation. THz InP transistors have been achieved that have enabled the world’s fastest 0.48 THz monolithic integrated circuits. Compact THz high power amplifiers using micro-machined vacuum electronic devices will enable radiation sources at 1.03 THz with 15 GHz of instantaneous bandwidth. Ultimately, low-loss interconnects and integration techniques will couple TMICs with HPAs to enable THz coherent heterodyne transceivers.

This part of the program has aggressively developed multi-THz Indium Phosphide-based transistors (heterojunction bipolar transistors, or HBTs, and High Electron Mobility Transistors, or HEMTs) and has demonstrated TMICs operating up to and above 1 THz. In addition, THz low-loss inter-element interconnect and integration technologies have been developed, enabling compact THz transmitter and receiver modules to demonstrate wireless communications at 220 GHz, 670 GHz, and 850 GHz – hundreds of times faster than your cell phone.

This part of the program aims to develop compact, micromachined vacuum electronics devices to produce a significant increase of output power at frequencies beyond 1.0 THz and to radiate that energy at an antenna. Already, micromachined traveling wave tube amplifiers (TWTs) operating at 670 GHz and 850 GHz have been built and tested and have produced the highest linear output power available at these frequencies.

Northrop Grumman Corporation, under DARPA’s Terahertz Electronics in 2014 created a fastest solid-state amplifier integrated circuit ever measured, operating at a speed of one terahertz. The ten-stage common-source amplifier Terahertz Monolithic Integrated Circuit (TMIC) exhibits power gains several orders of magnitude beyond the current state of the art, using a super-scaled 25 nanometer gate-length. The Northrop Grumman TMIC showed a measured gain of nine decibels at 1.0 terahertz and 10 decibels at 1.03 terahertz.

The DARPA/Northop chip reportedly has excellent properties, with a gain of 9dB at 1THz, and 10dB at 1.03THz. “Gains of six decibels or more start to move this research from the laboratory bench to practical applications — nine decibels of gain is unheard of at terahertz frequencies” says Dev Palmer, DARPA’s THz Electronics program manager. “This opens up new possibilities for building terahertz radio circuits.”