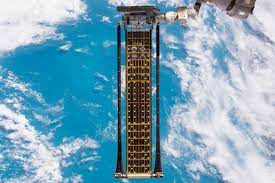 The solar cells produce electrical power (current) from incident sunlight.  However, individual solar cells generate very little power. So, in order to generate more power, a group of cells that are present in an array form can be used. Solar arrays are primarily used in satellites in order to provide power to other subsystems.

In space at Low Earth Orbit, the sunlight is not filtered by the atmosphere. The efficiency of a solar panel depends of the wavelength of the photons that it can absorb. Therefore, in a space context with a larger wavelength of photons available than at Earth, the technology used for the solar cells has to be able to absorb the maximum amount of photons. More, since the area available of the solar panel is strongly limited on the CubeSat (each side size 100 cm², and has to integrate solar cells but also sensors and wires). The triple junction technology solar cells have a layer well adapt to a large wavelength area with an absorption wavelength from 300 nm to 1700 nm. This option but also other types of technology have been study in the State of the Art document.

For both uses, a key figure of merit of the solar panels is the specific power (watts generated divided by solar array mass), which indicates on a relative basis how much power one array will generate for a given launch mass relative to another. Another key metric is stowed packing efficiency (deployed watts produced divided by stowed volume), which indicates how easily the array will fit into a launch vehicle. Yet another key metric is cost (dollars per watt)

The Roll-Out Solar Array (ROSA) and its larger version ISS Roll-Out Solar Array (iROSA) are lightweight, flexible power sources designed by NASA to be deployed and used in space. This new type of solar array provides much more energy than traditional solar arrays at much less mass.  Traditional solar panels used to power satellites are bulky, with heavy panels folded together using mechanical hinges. Given a space-bound payload is limited in its mass and volume by necessity, ROSA is 20 percent lighter (with a mass of 325 kg (717 lb)) and one-fourth the volume of rigid panel arrays with the same performance.

ROSA is a flexible and rollable solar array that operates the same way a measuring tape unwinds on its spool. The new solar array design rolls up to form a compact cylinder for launch with significantly less mass and volume, potentially offering substantial cost savings as well as an increase in power for satellites. ROSA has a center wing made of a flexible material that supports the strings of photovoltaic cells that produce electricity.

Both the sides of the wing have a narrow arm that extends through the length of the wing to provide support to the array, called a high strain composite boom. The booms look like split tubes made of a stiff composite material, flattened and rolled up lengthwise. The array does not need any motor to unfurl. This is achieved using the potential energy stored in the booms that is released as each boom transitions from a coil shape to a straight support arm. The solar wings are then deployed due to strain energy in rolled booms that are present at the two ends of the structure.

The ROSA technology is being implemented on the following flight programs:

NASA tested the ROSA technology in vacuum chambers on Earth and tested it in space on June 18 of 2017. ROSA launched aboard SpaceX CRS-11 on 3 June. NASA decided to conduct continuous tests for a week and observe its consequences. Engineers observed the behavior of the solar array as it was exposed to extreme temperature swings through the ISS’s orbit. Vibrations and oscillations were also mechanically introduced to assess the array’s response to structural loads. Subsequent to the experiments, ground controllers were unable to lock the solar panel in its stowed configuration. The solar array was therefore jettisoned from the International Space Station. In June 2021, two new solar iROSA panels were installed on the International Space Station’s P6 truss mast cans. The two operations took six hours each to complete and were carried out on three spacewalks by astronauts Shane Kimbrough and Thomas Pesquet.  The new arrays are intended to give the station a total of 120 kilowatts of additional augmented power during daytime orbit.

The Power and Propulsion Element of the Lunar Gateway and Double Asteroid Redirection Test mission will use ROSA technology to power its solar electric propulsion. The ROSA on DART will enable the spacecraft to navigate through space and reach the Didymos asteroid system. The flexible and rollable modular wings are lighter, more compact and stiffer in space and smaller than iROSA, each array will slowly unfurl to reach 28 feet in length, about the size of a satellite bus. DART will be the first spacecraft to fly the new arrays, paving the way for their use on future missions. Redwire delivered ROSA to APL in May and worked closely with the APL team for some weeks to carefully installed them onto the spacecraft, which was completed on 13 August 2021.