Combat aircraft have continued to evolve since the introduction of the jet engine during World War II, exemplified by the F-16, first flown in 1974, the F-22 (1990), and the F-35 (2001). These aircraft are characterized by a traditional wing/body/tail arrangement, are all commanded by an on-board pilot, and are all driven by the requirement for superb aerodynamic performance. Throughout the evolutionary process, two additional design characteristics, affordability and stealth, have become increasingly important.

The propulsion system for a combat air vehicle is critically important in terms of cost, weight, volume, stealth, performance, and overall configuration integration. Major propulsion system components, such as the engine inlet system and the engine exhaust system, are also critical. The inlet system captures outside air and delivers it to the engine. Inlet systems are typically 10 to 20 feet long and weigh on the order of 500 to 1200+ pounds. The purpose of the exhaust system is to convert the engine’s high-temperature thermodynamic energy into net propulsive force. Performance figures-of-merit for the exhaust system include gross thrust coefficient (a measure of the efficiency of the system) and thrust vector angle (a measure of the system’s ability to divert or steer the exhaust thrust in a nonaxial direction).

As combat aircraft continue to evolve, they must retain current levels of aerodynamic performance and, at the same time, become more affordable and more stealthy. These improvements will require changes in the design of inlets and exhausts; both systems will have to be shorter and more compact, simpler and lighter in terms of mechanical complexity and moving parts, and shaped to conform to the advanced, all-wing, tailless vehicle configurations of future aircraft

Over the past few decades, a number of aerodynamic flow control technologies have been developed for implementation in various applications. Typical applications include, mixing enhancement, drag reduction, lift augmentation and noise mitigation.

The feasibility of increasing the efficiency and simplifying fluid related systems (e.g. high-lift systems) is very appealing if one considers that a 1 percent saving in world consumption of jet fuel is worth about 1.25 million dollars a day of direct operating costs (in 2002). Likewise, such fuel savings would lead to reduced environmental impact, although such environmental effects are difficult to quantify.

A flow control device can be considered passive or active.

For the past century, airplane control mechanisms have relied on hinged surfaces such as ailerons and rudders. Shifting their positions alters the shape of the wings or tail, changing the surrounding airflow—and thus air pressure. This adjustment pushes the aircraft to maneuver in predictable ways.

Passive control involves geometrical modifications like vortex generators on an aircraft wing for flow separation control, or chevrons on an exhaust nozzle of an aircraft to mitigate noise. Passive control devices always are on, no matter the need or performance penalty.

These traditional control mechanisms create challenges for designing extremely low-observable aircraft. Moving control surfaces cannot be incorporated in the design of such aircraft without the introduction of gaps, edges, actuators, and support structures, all of which can introduce discontinuities, edges, and gaps, increasing the signature, even when the air vehicle is flying straight and level and control effectors are not being used. The deflection of control surfaces required to maneuver stealthy air vehicles can be quite large and can generate undesirable and detectable radar returns.

Active flow control, on the other hand, involves energy or momentum addition to the flow in a regulated manner. Active flow control alters the aircraft’s aerodynamic flow field through mechanical actuators, or by ejection or suction on a wing, fuselage, inlet, or nozzle.

Active flow control, in the form of periodic excitation consists of additional system and requires power input but, it is used in various applications due to its large potential payoff. From the jet literature, we also know that the jet entrainment can be used beneficially to enhance the lift generated by airfoils. Further, the introduction of periodic motion accelerates and regulates the generation of large coherent structures, which are responsible for the jet entrainment through transporting momentum across the shear layers. Thus, apart from delaying the boundary layer separation, active flow control techniques are equally advantageous in enhancing the lift and reducing the drag

Active control is more desirable than passive control, because it can be turned on or off as needed, but it involves additional effort and cost. Active flow control,  involves energy or momentum addition to the flow in a regulated manner.

The progress in system integration, miniaturization, actuators, sensors and computational techniques enables the utilization of fast-responding, unsteady, flow-control methods into a closed-loop system.

Actuators are at the heart of active flow control implementation, and have been the weakest link in the development of flow control technology. The desired attributes of actuators include light weight, low profile, no moving parts, energy efficiency, durability, ease of use, scalability, high amplitude, wide bandwidth, and rapid response. Plasma actuators possess almost all these traits and the researchers at ARC have been at the forefront of the development of plasma actuators and their implementations in various applications.

Aerospace companies have been researching stealthy control mechanisms for Aircrafts and drones. The international aerospace company Airbus unveiled a model of it’s new drone called the Low Observable UAV Testbed (LOUT), which reportedly combines several undisclosed stealth technologies. Hints in the aircraft’s description led some aviation experts to speculate that one of LOUT’s radar-evading powers could come from a lack of conventional moving control surfaces.

A team of NATO experts is developing new technology that will make military aircraft less detectable. Most forms of aircraft need actuators (vertical and horizontal flaps) to enable flight and control. The technology being developed leaves these flaps redundant in certain phases of flight, replacing them with an active flow control system using air to help manoeuvre the aircraft. The research into innovative control effectors, or ICE, is being carried out by a NATO task group under NATO’s Science and Technology Organization, which includes representatives from the US Air Force Office of Scientific Research, the US Air Force Academy in Colorado, the Illinois Institute of Technology and Lockheed Martin. The first model of the ICE aircraft was made in 2015, measuring just 28 centimetres in wingspan. It has since undergone numerous rounds of testing in a wind tunnel at the US Air Force Academy in Colorado. Footage includes various shots of NATO experts working on, and testing, a prototype unmanned aerial vehicle (UAV). 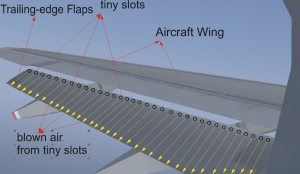 The aerodynamic flow control group at ARC is by far the most active and productive group in the country with activities in both passive and active control. There are currently seven faculty from Aerospace, Mechanical, and Electrical Engineering pursuing flow control research and development in various applications, working closely with industry, national laboratories and government agencies. Professors Mo Samimy, Jim Gregory, and Jeffrey Bons are working on the development of actuators and their implementation in various applications. Professor Igor Adamovich is working on the development of plasma actuators as well as modeling of plasma actuators and processes.

A process can be defined as a sequence of steps that produce the desired outcome. Defined …