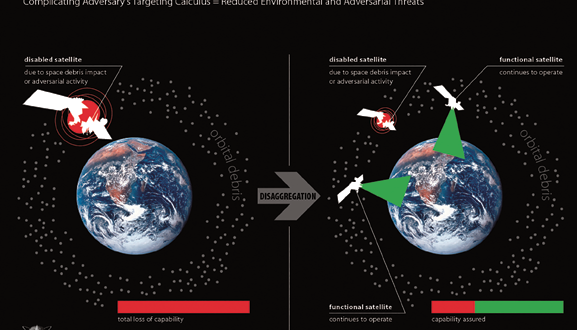 The space is increasing becoming another domain of conflict due to enhanced militarization along with proliferation of counter space weapons like electronic warfare, anti-satellite weapons, and DEW weapons.

“Our space assets have come under risk, however, due to activities of adversaries to degrade, deny, or disrupt our ability to operate in space. Autonomy provides a means to build resilient networks that can reconfigure themselves in the face of such attacks, preserving essential functions under duress,” says USAF.

Senior leaders and policy makers in the US government have been calling for a disaggregated National Security Space architecture in response to the rapidly changing nature of the space domain. The Air Force Space Command (AFSC) defines disaggregation as: “The dispersion of space-based missions, functions or sensors across multiple systems spanning one or more orbital plane, platform, host or domain.”

“A disaggregated system design offers a means to avoid threats, ensure survivable capabilities despite hostile action, and develop the capacity to reconstitute, recover or operate through adverse events should robustness fail. Carefully pursued, disaggregation can lead to less costly and more resilient space architectures in the face of a rapidly evolving security environment.”

“The larger numbers of satellites complicate an adversary’s decision-making calculus and increases the uncertainty of outcomes. Smaller, lower-cost satellites, built and launched on frequent schedules could also make it much easier to reconstitute space capabilities, and introduce new technologies and capabilities. New countermeasures could also be added as the corresponding threat systems are developed and fielded.”

The Defense Advanced Research Projects Agency is seeking information on new technologies it can use to manage the sharing of missions across large constellations of inexpensive low-earth orbit satellites for the Defense Department.

DARPA and DoD are interested in moving toward satisfying DoD space missions with large constellations of inexpensive satellites in low earth orbit (LEO). This distributed approach provides both redundancy and resiliency, as well as other benefits. However, a large constellation of satellites requires much more complex management to fully optimize their performance, especially in a dynamic or tactical environment. Current advances in autonomy and machine learning are enabling the management of multiple vehicle systems that collaborate. DARPA is interested in leveraging these advances in order to demonstrate unique military utility.

DARPA/TTO is seeking new technologies and concepts to enable highly autonomous satellites, payloads, and constellations. Areas of interest include, but are not limited to: