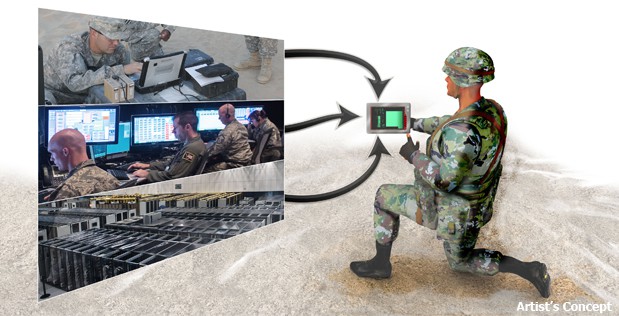 U.S. military researchers are asking industry to develop secure radio frequency (RF) transmitter and receiver technologies to enable the next generation of secure military tactical radio systems. Tactical communications is critical requirement of  military communications in which information of any kind, especially orders and military intelligence, are conveyed from one command, person, or place to another upon a battlefield, particularly during the conduct of combat. Secure tactical radios are a critical capability for DoD systems. Current DoD tactical radios attempt to achieve security over a wireless channel by spreading transmitted content over time and operating frequency. Temporal and spectral spreading reduces transmitted power density, so as to potentially operate below the adversary’s receiver detection limit.

The basis of spread spectrum technique is Shannon’s formula for channel capacity  provides  a relationship between achievable bit rate, signal bandwidth and signal to noise ratio. Channel capacity is proportional to bandwidth and the logarithm to the base of two of one plus the signal to noise ratio. What this means is that the more bandwidth and the better the signal to noise ratio, the more bits per second you can push through a channel. This is indeed common sense. However, let us consider a situation where the signal is weaker than the noise which is trashing it. Under these conditions this relationship becomes much simpler, and can be approximated by a ratio of   Capacity/Bandwidth = 1.44* SNR. What this says is that we can trade signal to noise ratio for bandwidth, or vice versa. If we can find a way of encoding our data into a large signal bandwidth, then we can get error free transmission under conditions where the noise is much more powerful than the signal we are using. This very simple idea is the secret behind spread spectrum techniques.

Direct Sequence Spread Spectrum Radios (DSSS) radio starts with a data packet that it is required to send. But instead of sending that data as a “narrow band” signal, the DSSS generates a 15, 63 or 127-bit pseudo-random code word for every bit in that packet and then combines these code words with the packet by multiplying them together. These code words spread the “narrow” data being sent across a much wider bandwidth than would normally be required. The result is a signal with lower power density, stretched across a wide bandwidth waiting for a receiver to find it.

At the DSSS receiver, the same spreading code is reapplied to the spread received power signal once it is found and the wideband signal is narrowed. The data is retrieved intact because the spreading process is independent of the data and when the spreading is canceled; the data is left in its original state. The data has moved from a narrow state to a wide one, and back to narrow. The nature of this process enables data to be moved through the DSSS radio very quickly, and in terms of security, the radio signal essentially hides amidst the “background noise,” undetectable.

Today’s tactical radios use spread spectrum techniques to reduce the spectral power density of transmitted signals. Signal spreading is mainly used to accommodate spectrum sharing by multiple users and to reduce transmission power below the sensitivity of the adversary’s detection threshold. The limitations of current spread spectrum approaches include:

The WiSPER program seeks to develop a fundamentally disruptive wireless air interface transceiver technology to enable and sustain secure and robust high-bandwidth RF communication links. The WiSPER wideband adaptive air interface will also mitigate impairment due to dynamic harsh and contested environments to maintain a stable communication link. It is envisioned that the capabilities developed under the WiSPER program will provide future U.S. warfighters with a dominant technology advantage over their adversaries. DARPA is soliciting solutions that are implemented in a tactical radio size, weight, and power suitable for portable or ground installations.

CACI won a $30.7 million contract on 25 March, and Perspecta Labs won a $19.2 million on 24 March. The companies are participating in the project’s first phase, by carrying the WiSPER system architecture through a conceptual design supported by modeling and simulation, culminating in a benchtop implementation and lab test. More WiSPER phase-one contracts may be awarded.