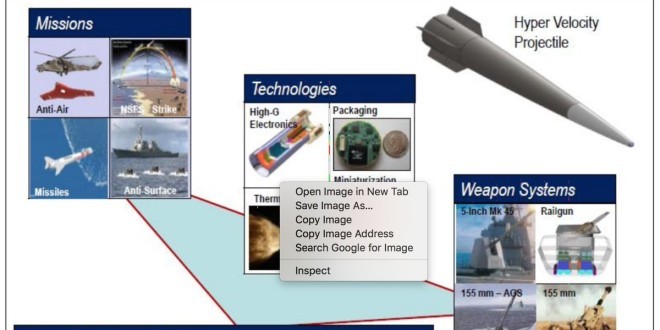 Gun-launched guided projectile (GLGP), previously known as the hypervelocity projectile (HVP) is the new weapon of US Navy that could improve the ability of Navy surface ships to defend themselves against missiles, unmanned aerial vehicles (UAVs), and surface craft.

As the Navy was developing EMRG, it realized that the guided projectile being developed for EMRG could also be fired from 5-inch and 155mm powder guns. Navy cruisers each have two 5- inch guns, and Navy Arleigh Burke (DDG-51) class destroyers each have one 5-inch gun. The Navy’s three new Zumwalt class (DDG-1000) destroyers, the first of which entered service in October 2016, each have two 155mm guns

When fired from 5-inch powder guns, the  GLGP projectile achieves a speed of roughly Mach 3, which is roughly half the speed it achieves when fired from Electro Magnetic Rail Guns (EMRG) , but more than twice the speed of a conventional 5-inch shell fired from a 5-inch gun. This is apparently fast enough for countering at least some ASCMs. Their impact force—their mass times the square of their velocity—can destroy expensive missiles and multiple warhead.

The modular design will allow HVP to be configured for multiple gun systems and to address different missions. The hypervelocity projectile is being designed to provide lethality and performance enhancements to current and future gun systems. A hypervelocity projectile for multiple systems will allow for future technology growth while reducing development, production, and total ownership costs.

The Navy described HVP in September 2012 as is a next generation, common, low drag, guided projectile capable of completing multiple missions for gun systems such as the Navy 5-Inch, 155-mm, and future railguns. Types of missions performed will depend on gun system and platform. HVP’s low drag aerodynamic design enables high velocity, maneuverability, and decreased time-to-target. These attributes coupled with accurate guidance electronics provide low cost mission effectiveness against current threats and the ability to adapt to air and surface threats of the future.

A single 25-pound projectile can dispense more than 500 three-gram tungsten impactors and be fired at hypervelocity by electromagnetic energy. Their impact force—their mass times the square of their velocity—can destroy expensive missiles and multiple warheads.

The tungsten “hypervelocity projectile” (HVP) is being tested in the Army’s 105mm Howitzers, and test fires from the Navy’s deck-mounted 5-inch guns are expected as well, according to a report from Scout Warrior.

The US Navy is actively developing gun-launched, guided projectile systems to engage a variety of targets, primarily Cruise Missiles, but also FAC/FIAC (Fast Attack Craft / Fast Inshore Attack Craft). Due to gun pointing errors, projectile dispersion, threat maneuverability, and longer fly-out times associated with extended range intercepts, guided projectiles with a combination of lethality and accuracy technology innovations are required to defeat threats of interest. In addition, the US Navy is interested in limiting the topside and combat system modifications to Navy ships in order to implement a guided projectile solution.

The Navy is calling for industry input about projectile seeker technologies to support the service’s development of gun-launched, guided projectiles capable of defeating cruise missiles, fast attack craft and fast inshore attack craft, according to a Jan. 29 request for information posted on Federal Business Opportunities.

Projectile seeker technologies are needed to achieve terminal guidance efficiently and successfully. The Naval Sea Systems Command (NAVSEA) is seeking information from industry for a seeker solution to support advancing US Navy technology for guided projectiles.

The Navy 5″ Guided Projectile (GP) is a gun launched, fin stabilized, terminally guided projectile. The GP consists of a guidance head, control section, warhead, motor, and stabilizing fins. An obturator is located at the aft end of the motor; it decouples the GP from the spin induced by the rifiing of the gun, and also prevents high pressure gases from propagating forward.

The rocket motor is a low thrust propulsion unit, used to obtain increased range for the GP. Both guidance systems achieve required terminal accuracy by canard control surfaces and a gyro-stabilized seeker.

The peak gun launch pressure is 43,000 psi, which results in a rigid body acceleration of approximately 8000 g. At muzzle exit the pressure is nominally 7500 psi. For a worn gun, the muzzle exit pressure can be as high as 9500 psi. In both cases, the rate of decay of the base pressure has been determined to be very rapid, falling exponentially to 100 LAW psi in approximately 500 microseconds. This rapid pressure decay at muzzle exit is the driver for the set forward (tension) loads of the GP primary structure; it also is the principal contributor to the shock loading of internal components.

Responses should include a “rough order of magnitude estimate for average unit production cost for a quantity of 10,000 units over five years,” the document states.

The Navy is particularly interested in “fully active radio frequency and passive optic” seeker types because “they minimize platform modifications while providing system capability against raids and enabling over the horizon terminal operation,” the document states.

The RFI also singles out the MK 34 Gun Weapon System, stating that “if technologies other than active RF or passive optic are identified, responses should include a physical description of any required supporting infrastructure . . . [to] integrate” with that weapon.

The US Navy is interested in a variety of seeker solutions, in particular, fully active Radio Frequency (RF) and passive optic seeker types. These two seeker families have been emphasized because they minimize platform modifications while providing system capability against raids and enabling over the horizon terminal operation. It may be assumed that midcourse guidance can be implemented with SPY radar and a platform-to-projectile, 2-way datalink. Responses should include a description of the seeker, including technology used, operational modes and functional description.

SEEKER SWaP – SIZE. Guided projectile designs have significant volumetric limitations, and all volume is bought at the expense of warhead size. Support structures outside of the specified volume, such as sabots, may be acceptable.

If technologies other than active RF or passive optic are identified, responses should include a physical description of any required supporting infrastructure (e.g. illuminators or designators), including dimensions, maturity level, and a diagram of how it would integrate with the MK 34 Gun Weapon System (GWS) on CG 47 Cruisers and DDG 51 Destroyers.

SEEKER SWaP – POWER. The power required to energize passive, semi-active and active seekers can vary over multiple orders of magnitude. The available volume of a high velocity guided projectile is very limited which emphasizes the importance of high energy density power sources. Generally, the maximum volume allocated to the Seeker’s Power System is defined by a cylindrical space 2 inches in diameter and 4.5 inches long. This power source should have a 20-year Shelf Life and be capable of providing maximum output for a period of at least 3 seconds, with a variable initiation time depending on the time-of-flight to the target and the Target type.

SEEKER LOCATION. The proposed seeker volume exists in the front of the projectile. In general, this is required to allow for the forward aperture required to acquire and track targets. However, it is preferable to keep the front of a guided projectile relatively dense to maintain aerodynamic stability. For this reason, the US Navy is also interested in novel seeker solutions which do not use traditional lightweight, low density Radomes such as arrays of conformal antennas and distributed aperture concepts. Responses should include a detailed description of the proposed location and function of the seeker as integrated with a guided projectile.

SEEKER FIELD OF VIEW. Without the benefit of traditional gimbals, a body-fixed seeker’s field-of-view (FoV) must be large enough to contain the look angle to the target and the angle of attack of the airframe required for intercept maneuvers. Moreover, measurement of these combined angles must be linear over the entire FoV for a wide range of signal-to-noise ratios (SNRs). Mid-course guidance can be used to minimize the FoV requirements but, in general, the FoV will be much greater for body-fixed seekers. Gimbaled systems add cost and complexity but can be pointed at the target prior to acquisition and the additional benefit of body motion decoupling reduce the required FoV significantly. Imaging seekers will have to deal with problems caused by image blooming and aim point shifts during end game. In general, the Navy is interested in gimbaled and body-fixed seeker technologies. If possible, responses should include FoV and sensitivity trades for gimbaled and body-fixed seekers thatsupport any proposed technical solution.

TECHNOLOGY READINESS. Responses should include an assessment of the Technology Readiness Level (TRL) and reliability of the seeker in its proposed mission areas. TRL claims should be substantiated, where possible, including descriptions of any analyses and test and evaluation. Responses should also include substantiated Manufacturing Readiness Level (MRL) of the seeker and its subcomponents. Details of previously conducted test events and results should be included. Events planned in the next 12 months with the goal of improving TRL and MRL should be described.

DEVELOPMENT COST AND SCHEDULE. Responses should include a schedule estimate to mature the seeker to a TRL 8/MRL 7. Assume 50 units to be delivered to the US Navy for qualification testing. 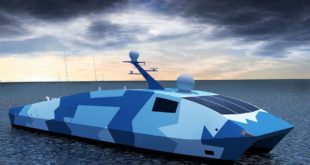