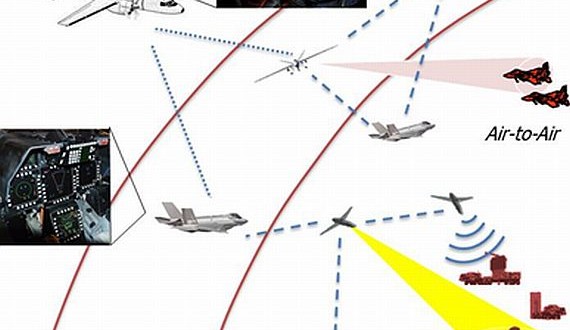 As commercial technologies become more advanced and widely available, adversaries are rapidly developing capabilities that put our forces at risk. To counter these threats, the U.S. military is developing systems-of-systems concepts in which networks of manned and unmanned platforms, weapons, sensors, and electronic warfare systems interact over robust satellite and tactical communications links. These approaches offer flexible and powerful options to the warfighter, but the complexity introduced by the increase in the number of employment alternatives creates a battle management challenge.

Further complicating matters, in future conflicts U.S. forces may face degradation or denial of critical communications capabilities essential for coordination and shared situation understanding. Adversaries like Russia and China have developed sophiticated electronic warfare environments. With both the complexity of coordinating innovative systems of systems, and the sophistication of adversary capabilities expected to grow, automated decision aids become vital.

In search of a fix, BAE Systems is collaborating with the Defense Advanced Research Projects Agency and the Air Force Research Laboratory. Their emerging solution, called distributed battle management (DBM), promises to enable complex teamwork between manned and unmanned aviation even in comms-deprived environments.

“To solve this challenge, we’ve developed cutting-edge, semi-autonomous software in a category called Distributed Battle Management (DBM), which is the process of providing timely and relevant information to operators and pilots when communication is not assured, so they can better manage and control air-to-air and air-to-ground combat in contested environments,” says BAE.  Our automated, on-board software enhances mission effectiveness by providing warfighters with shared situational understanding, interchangeable roles, coordinated objectives for teams of manned and unmanned aerial vehicles in communications denied environments, and compressed, prioritized data transfer when communications are available.

BAE Systems has developed automated, on-board software, which is designed to provide information to the combatant in communications-denied environments. “The lack of automated decision aids severely hinders operators and pilots from making critical decisions with limited communications so they can adapt to combat scenarios,” said David Hiltz, director of the Planning and Control Technologies Directorate at BAE Systems. “Our DBM software delivers these automated decision aids that provide mission execution options and the ability to maintain a consistent mission representation and status across all platforms, which allows warfighters to make better, faster combat decisions to ensure mission safety and completion.”

In 11 days of flight testing in 2018 DARPA and AFRL demonstrated the DBM in seven live flights. Even when deprived of full comms capabilities, the system delivers shared situational understanding and coordinated objectives between multiple teams of manned and unmanned aerial vehicles. The DBM program is slated to run until July 2019, with a series of lab and field test events expected. Planners will decide then whether to field the capability and in what context.

A significant amount of foundational algorithm development work has been done in planning and control algorithms for battle management – much of it focused on the permissive environment with assured communications. The challenge for the DBM program is to build on those foundations to develop new algorithms that are reliable in realistic peer threat environments (environments in which existing algorithms, which assume assured communications, do not extend). An important part of this is implementation of the algorithms in software, integrating the software onto real aircraft, and demonstrating the software in virtual simulations and simulated combat.

“We’re looking for innovative algorithms from the planning and control theory communities that go beyond current algorithms, many of which assume assured communications in the tactical environment,” said Craig Lawrence, DARPA program manager. “Advanced human-machine interaction technologies for cockpits and battle manager stations are also an area where we’re looking for novel approaches to enable greater comprehension and quick decision making in an increasingly contested and complex battlespace.”

DBM seeks to leverage artificial intelligence computing techniques to ingest and analyze large amounts of information in real time in an effort to feed pilots an accurate picture of the battle on the ground. The system takes in Blue Force Tracking data and mission-planning information, while simultaneously tracking and adapting to the changing health of the comms network.

“We are trying to manage information flow. You want to get the right information to the people who need it, at the time they need it,” Kallberg said. “If teammates cannot get onto the same page, they will not be able to execute efficiently. By sharing information across teams, you can build a fuller picture.” DARPA worries about near-peer adversaries who could attack communications links, making such critical sharing difficult or impossible, Lawrence said.

DBM addresses this through high-speed analytic processing, an AI approach that uses computer-speed thinking to sort messages and prioritize network usage, squeezing the most information down the narrowest pipe. “Given that you may not have all the bandwidth you want, you need a way to determine what you think is important to figure out how you can send it,” Kallberg ssaid.

AI can find ways to tweak a compromised network. “You and I may not be able to directly talk, for example, but there may be another path through which I can reach you, via some intermediary,” Kallberg said. If it delivers as planned, DBM will do all this automatically, in the background. That’s a crucial capability when one considers the already substantial demands of air combat. With DMB, “you don’t have to figure all this out and also fly the plane. The software will figure it out for you,” he said.

The program envisions two phases. Phase 1 focuses on technology development—planning, control, and situation understanding algorithms, and design of appropriate human-machine interfaces—and system engineering. Phase 2 plans for a team to build an integrated DBM capability to manage air-to-air and air-to-ground combat in a contested environment and to demonstrate that capability in large-scale simulation and live fly events.

DBM program is part of DARPA’s SoSITE program. The goals of the System of Systems (SoS) Integration Technology and Experimentation (SoSITE) program are to: develop SoS architectures to maintain U.S. air superiority in contested environments; demonstrate rapid integration of mission systems into existing and new architectures; and demonstrate the combat effectiveness and robustness of those architectures.

The company has developed advanced, semi-autonomous software in a category called distributed battle management (DBM) to help improve combat mission effectiveness. The software provides timely and significant data to operators and pilots to enable them to better manage and control air-to-air and air-to-ground combat in challenging environments.

Information such as situational understanding, interchangeable roles, as well as coordinated objectives for teams of manned and unmanned aerial vehicles can be provided. The software also enables compressed, prioritised data transfer when communications are available.

The capabilities were proven for the first time and the seven live flights that were conducted included a combination of live and simulation runs, as well as simulation-only runs. BAE Systems Planning and Control Technologies Directorate director David Hiltz said: “The lack of automated decision aids severely hinders operators and pilots from making critical decisions with limited communications so they can adapt to combat scenarios.

In fact, during an 11-day flight test, the U.S. Defense Advanced Research Projects Agency (DARPA), in association with the U.S. Air Force Research Laboratory (AFRL), successfully demonstrated capabilities for its DBM program for the first time during seven live flights that included a mix of live and simulation runs and simulation-only runs.

It also involved the contested network environment situational understanding system (CONSENSUS) that provides weapon-targeting guidance and mission awareness to pilots and operators through a common operational picture by fusing raw data from multiple platforms and sensors.

DARPA has proposed  a Phase II effort to extend the game-theoretic technology to apply to the DARPA Distributed Battle Management (DBM) program. “Our proposed AMDP (Adversarial Modeling for DBM Planning) system augments DBMs capabilities with a predictive model of adversarial uncertainty and action.We seek to answer the question How can we predict enemy responses and positions, and update those predictions based on incoming data.”

AMDP uses models of various aspects of enemy COAs including decoys and mobile units and various related uncertainties including: enemy positions, asset types, and available actions in a SEAD-type (Suppression of Enemy Air Defenses) mission against ground targets. AMDP fuses prior, incoming, and predicted world knowledge to generate courses of action that maximize informational gain metrics, and thus minimize uncertainty, in order to ensure correct actions and protect against worst-case outcomes due to unexpected events.The targeted end result is a simulation assessment showing improved mission efficacy (measured by speed and accuracy in identifying and engaging true targets in a field of decoys) in high-uncertainty scenarios, within a third-party air battle simulation environment such as AFSIM or SIMAF.

Presently jet engines are the workhorses of airplanes carrying millions of people, trillions of miles …