Trending News
Home / Geopolitics / US still dominating the global arms exports, while China has replaced Russia to emerge as the world’s second-largest arms producer, as per a report by SIPRI

US still dominating the global arms exports, while China has replaced Russia to emerge as the world’s second-largest arms producer, as per a report by SIPRI

New data from SIPRI’s Arms Industry Database shows that arms sales by the world’s 25 largest arms-producing and military services companies (arms companies) totalled US$361 billion in 2019. This represents an 8.5 per cent increase in real terms over the arms sales of the top 25 arms companies in 2018. Among those companies, four are Chinese and 12 are American. Those Chinese companies had combined sales of $56.7 billion in 2019, compared with $221.2 billion from the U.S. companies. Two of the top 25 firms are Russian, with combined sales of $13.9 billion.

In 2019 the top five arms companies were all US- based: Lockheed Martin, Boeing, Northrop Grumman, Raytheon and General Dynamics. These five together registered $166 billion in annual arms sales. In total, 12 US companies appear in the top 25 for 2019, accounting for 61% of combined arms sales of the top 25.

The revenues of the two Russian companies in the top 25 — Almaz-Antey and United Shipbuilding – decreased between 2018 and 2019, by a combined $634 million. A third Russian company, United Aircraft, lost $1.3 billion in sales and dropped out of the top 25 in 2019. Alexandra Kuimova, Researcher at SIPRI, said: “Domestic competition and reduced government spending on fleet modernisation were two main challenges for United Shipbuilding in 2019.”

For the first time, a Middle Eastern firm appears in the top 25 ranking. EDGE, based in the United Arab Emirates (UAE), was created in 2019 from the merger of over 25 smaller companies. It ranks at number 22 and accounted for 1,3% of total arms sales of the top 25. “EDGE is a good illustration of how the combination of high national demand for military products and services with a desire to become less dependent on foreign suppliers is driving growth of arms companies in the Middle East,” said Pieter Wezeman, Senior Researcher with the SIPRI Arms and Military Expenditure Programme.

The report also looks at the international presence of the 15 largest arms companies in 2019. These companies are present in 49 countries, through majority-owned subsidiaries, joint ventures and research facilities. With a global presence spanning 24 countries each, Thales and Airbus are the two most internationalised companies — followed by Boeing (21 countries), Leonardo (21 countries) and Lockheed Martin (19 countries).

The United Kingdom, Australia, the US, Canada and Germany host the largest numbers of these foreign entities. Outside the arms industry hubs of North America and Western Europe, the largest numbers of entities of foreign companies are hosted by Australia (38), Saudi Arabia (24), India (13), Singapore (11), the UAE (11) and Brazil (10). Alexandra Marksteiner of the SIPRI Arms and Military Expenditure Programme said: “There are many reasons why arms companies might want to establish themselves overseas, including better access to growing markets, collaborative weapon programmes, or policies in the host countries tying arms purchases to technology transfers”.

Siemon Wezeman, Senior Researcher at SIPRI, said: “The Chinese and Russian arms companies in the top 15 have a limited international presence. Sanctions against Russian firms and government-mandated limits on acquisitions by Chinese firms seem to have constrained their global presence.” 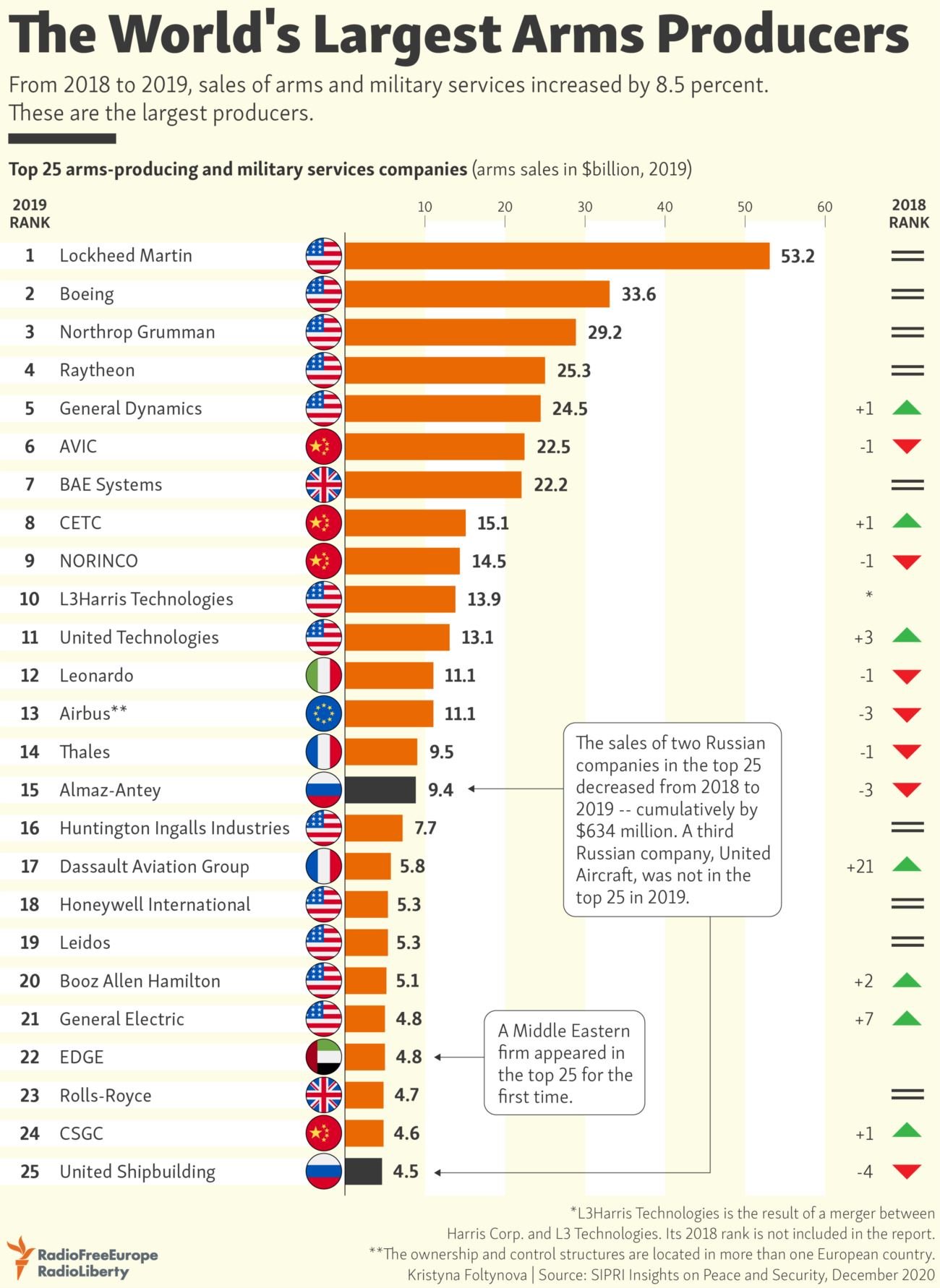 The top countries according to SIPRI in 2019 were

American weapons makers continue to dominate the global arms trade. In 2019 the top five arms companies were all based in the United States: Lockheed Martin, Boeing, Northrop Grumman, Raytheon and General Dynamics. These five together registered $166 billion in annual arms sales. In total, 12 US companies appear in the top 25 for 2019, accounting for 61 per cent of the combined arms sales of the top 25.

Seven countries in Europe have made it into the top 10 list of the world’s biggest exporters of major arms, while international arms transfers on a whole have continued to increase. Russia, France and Germany are included in the top 5, which make up three-quarters of all the world’s major arms exports

China has boasted the world’s second-largest arms-manufacturing industry for the past five years, ranking behind the U.S. in sales but outstripping Russia and the top European nations, according to a report released in Dec 2020 by a Swedish think tank. In earlier  report released in Jan 2020, the Stockholm International Peace Research Institute (SIPRI) estimated total sales by China’s arms industry had reached US$70 billion to US$80 billion in 2017. That compares to US$226.6 billion for the United States and US$37.7 billion for Russia, according to the Sweden-based think tank’s Top 100 list of the world’s largest arms companies for that year.

Chinese arms exports in 2018 were mainly fuelled by the sales in the Asia and Oceania regions, followed by Africa and the Middle East. China is becoming a top arms dealer, joining the ranks of the U.S., Russia, Germany and France. Top customers include Belt and Road Initiative partners as Beijing presents itself as an alternative to Russia, analysts say.

Second only to the United States, China wields a massive defense budget, which SIPRI estimates neared $250 billion in 2018. China has positioned itself as a lower-cost alternative for advanced weapon systems, and a main competitor to Russian hardware, Kamphausen wrote in an email to CNBC.

Russia, the world’s second biggest defence exporter, transferred arms worth $6.4bn in 2018. Its weapons exports to India and Venezuela suffered a decline during the year.

The revenues of the two Russian companies in the top 25—Almaz-Antey and United Shipbuilding—both decreased between 2018 and 2019, by a combined total of $634 million. A third Russian company, United Aircraft, lost $1.3 billion in sales and dropped out of the top 25 in 2019. Alexandra Kuimova, Researcher at SIPRI, said: ‘Domestic competition and reduced government spending on fleet modernization were two of the main challenges for United Shipbuilding in 2019.’

Russia’s arms export to India fell by a whopping 42 per cent between 2014-18 and 2009-2013, according to a new report. As a result, Russia accounted for 58 per cent of total Indian arms imports in 2014-2018, compared with 76 per cent in 2009-2013.In line with Prime Minister Narendra Modi’s effort to reduce country’s dependence on foreign arms, India’s import of arms decreased by 24 per cent between 2009-2013 and 2014-2018, according to the figures released by the report. This decline in India’s import is also partly due to delays in deliveries of arms produced under license from foreign suppliers, such as combat aircraft ordered from Russia in 2001 and submarines ordered from France in 2008.

Russia transferred major weapons to 48 nations during the last five years, with India, China, and Algeria being the biggest importers. Su-30MK fighter, T-90S tank, Mi-17 helicopter, and BMP-3 IFV are the popular export products of Russia.

Third in the list is France, French arms exports in 2018 were driven by the sales of combat aircraft and naval vessels. The country’s key defence exports include the Rafale fighter jet, NH-90 helicopter, Gowind-2500 frigate, MILAN anti-tank missile, and the MICA SAM system, among others.

Arms exports of $1.18bn in 2018 made Spain the third biggest arms exporter in Europe. Aircraft account for the majority of Spain’s exports, followed by naval vessels and sensor systems.

The country exported aircraft, naval vessels and armoured vehicles, including C-295 and A-330 MRTT aircraft, Hobart-class destroyers, and Ajax (Scout-SV) to Australia, Turkey, Saudi Arabia, the UAE, Malaysia and Egypt, between 2014 and 2018.

South Korean arms exports in 2018 were valued at $1.08bn, posing a tough competition to China as the main Asian exporter of arms. Iraq and Turkey were the major arms importers of South Korean weapons during the last five years.

Top ten arms exporting countriesSaudi Arabia is one of the major importers of arms from the United Kingdom. Image courtesy of Sgt Mark Webster RLC/MOD. The UK arms exports in 2018 were primarily driven by the sales of aircraft, vessels and missiles. Saudi Arabia, India, Indonesia, US, Oman, China, Qatar, Brazil, South Korea and Japan were the biggest importers of UK arms during the last five years.

British defence exports rose to a record £14bn in 2018, with sales to Saudi Arabia, the UAE, Qatar and other countries in the Middle East accounting for nearly 80% of that figure, official figures reveal. The DIT estimates the UK’s share of the defence export industry to be about 19%, placing it second for the first time since 2014, pushing Russia into third place and sitting comfortably ahead of fourth-ranked France.

Israel exported weapons worth $707m in 2018, becoming one of the world’s biggest arms exporters. Its major defence importers during 2014-2015 were India, Azerbaijan, and Vietnam. Israel was responsible for 3.1 percent of global arms exports in the period surveyed, a 60% increase in volume over previous years.

Israel has come under criticism for its cooperation with Azerbaijan over the country’s reported human rights violations, despite it being one of the few majority-Muslim countries with which Israel enjoys an openly positive relationship. The report also found a large increase in American arms exports to Israel, with 64% of Israel’s weaponry procurements coming from the US. Twenty-seven percent of Israel’s arms imports came from Germany, and 8.9% from Italy

Humanity is now generating more data than it can handle; more sensors, smartphones, and devices …