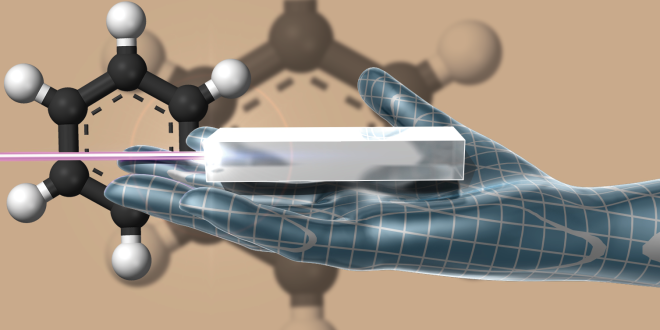 Among all the electromagnetic waves in the universe, the most relevant to us are those in the visible spectrum. It is the radiation at these wavelengths that enables us to see our surroundings and live, by breathing in oxygen generated by photosynthesis. Ultraviolet (UV) is electromagnetic radiation with a wavelength from 10 nm to 400 nm, shorter than that of visible light but longer than X-rays. Ultraviolet rays are invisible to all humans, although insects, birds, and some mammals can see near-UV.

In the deep UV, which corresponds to wavelengths of 280 nm or less, photons have higher energies and can interact with living cells, exciting electrons and disrupting critical chemical processes. This has led to mutation and cancer. Fortunately, however, UV light also has a good side. Highly energetic photons can be used to excite, engineer or break materials and chemical bonds in numerous applications.

One example of the positive use of UV light is as a source for enabling the identification of unknown biochemical substances. Radiation in this spectral range is ideal for this task, because all the functional groups are absorptive in the deep UV, compared to just a few in the visible.

Current  UV-based detection equipment include light emitting diodes (LEDs), fluorescent lamps, or large form-factor lasers such as solid-state or Excimer lasers. While LEDs are small, inexpensive, and have demonstrated continuous wave (CW) power levels around 70 mW at 270 nm, they lack the coherency of true laser sources that exhibit narrow linewidth, high beam quality and high power density. Similarly, fluorescent lamps are good for broad UV illumination but do not have the linewidth necessary for high-resolution spectroscopy.

This makes for stronger signals that speed detection. Using UV light to identify substances is not easy, however. Many applications cannot be taken out of the lab, because today’s gas and solid-state deep UV lasers are bulky, complex, and costly.

Benefits of a compact, deep UV laser are by no means limited to providing a source for Raman spectroscopy. This device could also aid non-line-of-sight (NLOS) communication, which is enabled by special characteristics of our atmosphere. In its upper region, ozone absorbs nearly all the sun’s deep UV light. Consequently, light in this solar band is nearly non-existent on the earth’s surface. The result is a low noise environment for the deep UV radiation, where photodetectors can reach a quantum-limited level of photon-counting detection.

Another appealing feature of the NLOS communication technology is that close to ground level, molecules and aerosols produce strong angle-independent scattering of deep UV light. This creates numerous communication paths from the source to the receiver, enabling the transfer of information even when line-of-sight obstacles are in the way’ such as buildings in an urban city. What’s more, deep UV light from the source is absorbed moderately by the atmosphere. This limits the distance that information may be transmitted, making this communication technology ideal for tactical applications.

“In addition to detecting chemical and biological agents in the field—or at home to protect against mass terror attacks—UV lasers have many other uses,” said Green. “The new class of UV lasers envisioned from the LUSTER program is expected to impact a broad range of applications such as point-of-need medical diagnostics, advanced manufacturing and compact atomic clocks.”

The most promising class of materials for making a compact, reliable, low-cost, and efficient deep UV semiconductor laser is the III-nitrides. Its attributes include high chemical and mechanical toughness and a very suitable range of bandgaps − the wavelength of the band edge can be as short as 200 nm.

Providing further motivation for the development of a deep UV III-nitride laser is the success of this material system in blue LEDs and laser diodes. But replicating performance at shorter wavelengths is far from easy. As of today, the wall-plug efficiency of most commercial deep UV LEDs is still in the low single-digit range, and there is yet to be a demonstration of an accompanying laser diode.

One of the biggest challenges associated with developing a deep UV laser is that the highly mature, blue-emitting InGaN system is not up to the task, due to its smaller bandgap. Stretching emission from the blue to UV demands the addition of aluminium to GaN, and this increases the in-plane lattice mismatch between the III-nitride and the most common substrate, sapphire. Material quality degrades, with imperfections dragging down the quantum efficiency.

On top of this, it is difficult to design a deep UV laser diode. One challenge is to develop a structure that provides sufficient optical confinement. Judged in these terms AlGaN is not ideal, with changes in the aluminium content producing small variations in refractive index.

The next milestone in deep UV laser development came in 2011, when a partnership between Palo Alto Research Centre and the US Army Research Laboratory announced the demonstration of an optically pumped 267 nm laser with a threshold power density of just 126 kW/cm2. One of the big differences between this laser and that produced at Kohgakuin University is the choice of substrate – it had been switched from SiC to bulk AlN. Reasons for preferring the latter include a low dislocation density – it is around 104 /cm2 – and a similar lattice constant and thermal expansion coefficient to that of aluminium-rich AlGaN. Thanks to these merits, there is a low dislocation density in the AlGaN heterostructures.

During the last few years, more groups have had success with AlN substrates. Low thresholds have been obtained by optical pumping while pushing the lasing wavelength ever shorter, to reach to 237 nm. These accomplishments have highlighted the AlN substrate as a technically promising platform for demonstrating and developing the deep UV laser diode.

However, there are issues associated with the AlN substrate. Supply is limited, costs are high, and it is only available in small sizes. What’s more, the current manufacturing process for making it introduces carbon impurities, which is a hindrance for UV devices, because they absorb light in this spectral range.

What about the alternatives? SiC is not ideal, due to relatively high costs that hamper manufacture. Far cheaper is sapphire, but it is plagued by large lattice and thermal expansion mismatches with AlN. These differences can lead to dislocation densities of over 1010 /cm2, unless special growth processes are adopted. And such a high level of imperfections is a major concern, because the internal quantum efficiency of a deep UV emitter is generally inversely proportional to the density of the dislocation-related, non-radiative recombination centres.

A detailed photoluminescence study by a partnership between Meijo University and Nagoya University has shown that despite a dislocation density of low 109 /cm2, the internal quantum efficiency for aluminium-rich AlGaN multiple quantum wells can exceed 50 percent. Note that these samples were grown on an AlN-on-sapphire template.

DARPA’s Laser UV Sources for Tactical Efficient Raman (LUSTER) program seeks proposals for compact, efficient and low-cost deep-UV lasers for highly deployable biological and chemical agent detection. The goal is to create a new class of UV lasers that are more than 300 times smaller than current lasers and 10 times more efficient. The resulting technology could be dropped into current detection systems to save size, weight and power (SWaP) or to create new systems that are smaller and more sensitive.

UV laser systems such as gas and solid-state lasers can operate below 250 nm and can reach high powers with narrow linewidths. However, these systems are larger than a typical desktop computer, prohibitively expensive, demonstrate limited reliability and have wall-plug efficiencies <<1%.

DARPA wants a UV source that is compact and inexpensive like an LED but with the beam characteristics of a laser, it should be small enough for a soldier to carry and can detect chemicals and biological agents from a range of ten meters. The success in this project would allow UV lasers to be used in areas, from medical testing to communication to highly accurate atomic clocks.

LUSTER program seeks to develop high beam quality compact UV lasers that are capable of achieving power greater than 1 W, wallplug efficiency greater than10%, line width less than 0.01 nm and capable of operating between 220-240 nm. A compact, efficient, and high-power UV laser will enable a wide range of applications including: remote detection of biological and chemical compounds; compact atomic clocks for precise timing and navigation; and point-of-need diagnostics.

DARPA hopes LUSTER can build on the accomplishments from the recently completed Compact Mid-Ultraviolet Technology (CMUVT) program. CMUVT developed record high-power UV light emitting diodes (LEDs) with high efficiencies and wavelengths approaching those sought under LUSTER. LEDs, however, have limited sensitivity, which is required for discriminating among compounds. LUSTER seeks to develop a new laser technology that has the accuracy of today’s expensive lasers but with the low cost and high reliability of LEDs.

DARPA’s earlier thrust was in the area of efficient middle ultraviolet (200–300 nm) emitter technology. The goal of the Compact Mid-Ultraviolet Technology program was to develop the essential heteroepitaxy, waveguides, cavities, and contacts to enable efficient light emitting diodes (LEDs) and chip-scale semiconductor lasers operating at wavelengths below 275nm.

Mature laser and detector technologies exist in the middle and far (122–200 nm) UV. Large excimer lasers, such as ArF (193 nm) and KrF (248 nm) systems, are common tools for lithography and laser cutting/welding, and a hand-held UV source consisting of a small Q-switched Nd3+:YAG laser and two frequency-doubling crystals (average output up to 16 mW) is currently used in company- and battalion-level chem/bio detection systems, such as the Joint Biological Point Detection System (JBPDS).

However, all these systems are too heavy, fragile, and expensive for wide-spread expeditionary deployment at levels from platoons down to the individual war fighter. Realizing semiconductor solutions for bright, efficient LEDs and lasers across the mid-UV wavelength regime will provide the critical path to compact systems in the future.

These ultraviolet devices are also used in portable water purification illuminators, and numerous other UV-dependent applications with respect to existing systems. The middle ultraviolet spectral region (200–300 nm) is of significant interest to the Department of Defense for applications involving detection, identification, and decontamination of biological and chemical agents.

Amino acids and many other common biological molecules are absorbing at these wavelengths, and the resulting near UV (300–400 nm) and visible fluorescence can signal their presence and aid in their identification in aerosol clouds, liquid suspensions, or powders.

Spectroscopic identification via Raman scattering is enhanced for excitation in the mid-UV because the Raman cross section is increased several orders of magnitude, and there is little to no fluorescence background at these wavelengths to obscure the scattered signal.

Many absorption bands also exist at these wavelengths to increase the efficacy of intense UV irradiation for sterilization (e.g., the excitation peak for thymine dimerization in DNA is at 265 nm) and chemical decontamination (via direct photolysis or activation of oxidizers). Middle UV optical sources and detectors could also facilitate solar-blind non-line-of-sight communications.