Flat-panel display technology is exploding on several fronts as more screens are required for more devices. CRT still works well for screen sizes up to 40 inches. But if you want a larger screen, a flat panel TV, widescreen model or HDTV compatibility, you’ll have to choose from several types of sets, including liquid crystal display (LCD), digital light processing (DLP) and liquid crystal over silicon (LCoS).
An LCD consists of thin-film transistors (TFTs), which determine the resolution of the display. LCDs are cheap products built in giant fabs. Today, the largest LCD glass size being built is based on a Gen 10.5 technology. DLP uses a digital micromirror device (DMD) to create a picture using a process that’s like making a mosaic out of small, square tiles. The DMD contains millions of microscopic mirrors that reflect light from a lamp. Each mirror creates one pixel of the final image. In most DLP televisions, a color wheel spins between the lamp and the DMD, adding red, green and blue light to the picture. The viewer’s eyes combine these colors to create the finished image.
Liquid crystal on silicon (LCoS or LCOS) is a miniaturized reflective active-matrix liquid-crystal display or “microdisplay” using a liquid crystal layer on top of a silicon backplane. It is also referred to as a spatial light modulator.
It is a combination of digital light processing (DLP) and liquid crystal display (LCD) projection technologies as it is reflective, but instead of using mirrors as in DLP, it uses liquid crystals that are applied on a reflective silicon backplate. Light is reflected off the backplate, while the liquid crystals open and close to modulate it.
LCoS was initially developed for projection televisions but is now used for wavelength selective switching, structured illumination, near-eye displays and optical pulse shaping. By way of comparison, some LCD projectors use transmissive LCD, allowing light to pass through the liquid crystal.
Liquid crystal on silicon (LCOS) technology has been developed for many years for image and video display applications. This technology combines the unique light-modulating properties of liquid crystal (LC) materials and the advantages of high-performance silicon complementary metal oxide semiconductor (CMOS) technology through dedicated
LCOS assembly processes.

LCOS microdisplay is constructed with a liquid crystal layer sandwiched between a thin-film transistor (TFT) and a silicon semiconductor with a reflective coating, hence the name. Like in DLP technology, light passing through a polarizing layer is reflected, but in the case of LCOS, it uses a reflective semiconductor instead of mirrors, while the liquid crystals act as gates that control the amount of light that passes and reaches the reflective surface, modulating the light and creating the image. As with LCD technology, LCOS modulates light in the RGB channel, so there are still three separate subpixels of red, green and blue.

A liquid crystal is a substance that is in mesomorphic state — it’s not exactly a liquid or a solid. Its molecules usually hold their shape, like a solid, but they can also move around, like a liquid. Nematic liquid crystals, for example, arrange themselves in loose parallel lines. Most LCDs use twisted nematic (TN) crystals — with the application of an electrical charge, the twisted crystals straighten out.

The silicon CMOS backplane consists of the electronic circuitry that is buried underneath pixel arrays to provide a high ‘fill factor’. The pixels are aluminum mirrors deposited on the surface of the silicon backplane. The incident light is transmitted through the LC layer with almost zero absorption. The integration of high-perform-ance driving circuitry allows the applied voltage to be changed on each pixel, thereby controlling the phase retardation of the incident wave-
front across the device.

In an LCoS display, a CMOS chip controls the voltage on square reflective aluminium electrodes buried just below the chip surface, each controlling one pixel. For example, a chip with XGA resolution will have 1024×768 plates, each with an independently addressable voltage. Typical cells are about 1–3 centimeters square and about 2 mm thick, with pixel pitch as small as 2.79 μm. A common voltage for all the pixels is supplied by a transparent conductive layer made of indium tin oxide on the cover glass. 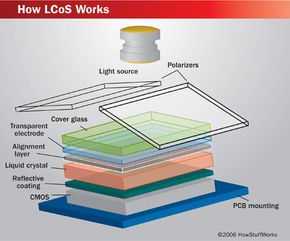 Parts of an LCOS microdisplay starting from the top:

Unlike the conventional LC flat panel displays, an LCOS device can be either transmissive or reflective and can be used to alter the polarization or the phase of an incident light beam utilizing the electrically modulated optical properties of LCs.
Such devices are usually called LCOS spatial light modulators (SLMs).

LCoS “has the capacity to match image generator output, giving aircrews incredibly realistic visual images, whether that is terrain, sky images, or ground and airborne targets,” says Jay Luis, director of marketing communications for Barco. “In general, LCoS projection technology is a good bet to have a huge impact in the simulation industry.”

It gives defense simulation customers more accurate flight training, Luis continues. “They are looking for visual systems that provide greater detail for target imagery—both air and ground,” he explains. “Increased image fidelity yields enhanced aircrew visual acuity. Now the challenge becomes how to capitalize on that capability—how to keep up with the multimillion pixel output of today’s image generators and to project images that look just as real as possible… with minimal latency or artifacts.”

Not so long ago CRT projectors were the state of the art in display systems, but they were surpassed by rear-projection projectors such as LCoS solutions nearly a decade past, says Paul Lyon, international product manager for display systems at Barco.

There are two types of rear-projection technology—Digital Light Processing (DLP) and LCoS, Lyon says. “DLP uses millions of little mirrors” that form a pixel in the image. It was developed by Texas Instruments, Lyon adds. Their maximum number of pixels is about 2 million. They are typically used in cinema or home theater applications through rear-projection TVs, Lyon says.

LCoS projectors do it a little differently, Lyon says. They use liquid crystals instead of the mirrors. “The concept has been around since 1980s early ’90s,” he adds. The crystals are applied to the chip’s surface and coated with layers that are very reflective, Lyon explains.

In F-16 jet fighter simulations pilots need a more realistic point of view, Lyon says. The F-16 display is a wrap-around that shows the real world through each of the cockpit windows, therefore the greater the resolution, the better the pilot will be able to train, he says.

One of those is optical and electronic edge blending, which eliminates the overlap zones, which occur in images when projections converge, Lyon says. The blending helps create a seamless image. Barco also has something called “linked constant light output,” which guarantees a constant level of brightness for the whole image, he continues. Barco’s warping technique provides a projection that not distorted, eliminates frame delay and pixel loss on a spherical or curved screen. Lyon notes that with LCoS technology the pixel lines are not easy to see, but if you stand close to a DLP image “you can see the actual pixel lines.”

Barco also has a system—the LX-5 which offers a 10-million pixel resolution, Lyon says. However, it is targeted more at the automotive and oil and gas industry. LCoS is such a “big advantage in terms of cost per pixel,” Lyon says. It is “trending downward in price more than any other display technology,” he continues.

To obtain that type of resolution, the simulations projectors will need millions and millions of more pixels—something that technology such as DLP cannot provide, Lyon explains. Barco’s new SIM 7 projection system’s LCoS technology provides 3 million pixels, one million more than best DLP device, Lyon says. Barco also has solutions where 9 projectors are used, providing about 27 million pixels, he adds. “It’s perfect for fast jet applications” with its smear reduction capability that enables the SIM-7 to maintain the sharpness of fast-moving images, Luis notes.

“Today’s visual display systems used for military simulation and training are more compact, produce higher quality images, are easier to operate and maintain, are easily scaled, and are more cost-effective than the technologies of only a few years ago,” Luis says. The challenge now lies in how to optimize systems that will utilize 100 million pixels or more, Lyon says. For example, he says, a solution that uses 20 of Barco’s LX-5 ten million-pixel projector, would have 200 million pixels to deal with, he notes.

LCoS-based products, which offer higher quality and more precise results than competing microdisplay technologies, such as liquid crystal display (LCD) and digital light processing (DLP), are being preferred by component manufacturers. Therefore, increasing demand for high-resolution display is supporting the growth of the liquid crystal on silicon (LCoS) display market.

However, the cost of technology, when compared to competitive technologies, like LCD and LED, are hindering the market. In addition, LCoS microdevices are difficult to manufacture, because of which several companies, including Intel, have abandoned their efforts after consistently low yields in manufacturing.

Liquid Crystal on Silicon (LCoS) Market 2021 is segmented as per type of product and application.