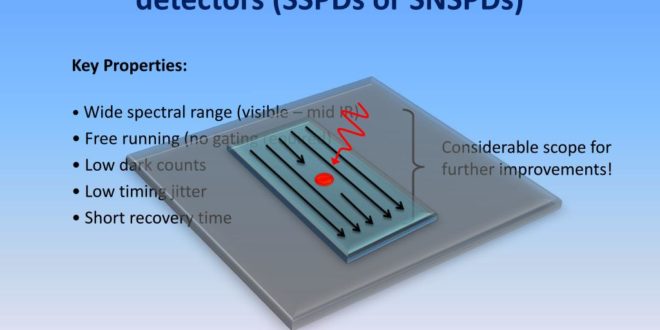 The process of detecting light—whether with our eyes, cameras or other devices—is at the heart of a wide range of civilian and military applications, including light or laser detection and ranging (LIDAR or LADAR), photography, astronomy, quantum information processing, medical imaging, microscopy and communications, including underwater Blue-Green communications.  Detection of photons—the fundamental particles of light—is ubiquitous, but performance limitations of existing photon detectors hinders the effectiveness of  aforementioned applications.  In all of these applications, performance could be improved by replacing classical, analog light detectors with high-performance photon counting detectors.

But even the most advanced detectors of photons—the massless, ghostlike packets of energy that are the fundamental units of light—are imperfect, limiting their effectiveness. Scientists suspect that the performance of light-based applications could improve by orders of magnitude if they could get beyond conventional photon detector designs—perhaps even to the point of being able to identify each and every photon relevant to a given application. But is it even possible, within the laws of quantum physics, to definitively detect and identify every relevant photon—and to be confident that each detection signal is true and accurate?

A theoretical physicist has been able to explain how to capture particles of light at room temperature. In doing so, Alex Kruchkov has confirmed the existence of a ‘new state of light’ which could pave the way for advanced computer chip, laser and solar panel technology. Previously, getting hold of these particles – called photons – was only thought to be possible under extremely cold temperatures. Light is made up of tiny quantum particles called photons. Physicists know that when quantum particles condense, they lose their individual identity. Their different energy levels collapse into a single macroscopic quantum state, causing them to behave like clones and form a ‘super particle’ or wave known as a Bose-Einstein condensate. A long-standing question in physics has been whether or not photons can be condensed like other quantum particles such as rubidium atoms. In theory it should work, but the main obstacle to proving the effect has always been that photons have no mass, which is a key requirement for a Bose-Einstein condensate. Mr Kruchkov’s mathematical model shows that photons can be captured in a Bose-Einstein condensate state, and at room temperature and pressure.

DARPA launched  Fundamental Limits of Photon Detection—or Detect—program in 2016 with  aim to establish the first-principles limits of photon detector performance by developing new fully quantum models of photon detection in a variety of technology platforms, and by testing those models in proof-of-concept experiments.

“The goal of the Detect program is to determine how precisely we can spot individual photons and whether we can maximize key characteristics of photon detectors simultaneously in a single system,” said Prem Kumar, DARPA program manager. “This is a fundamental research effort, but answers to these questions could radically change light detection as we know it and vastly improve the many tools and avenues of discovery that today rely on light detection.”

The following are examples of technology platforms which may play an important role in Detect:
 Superconductor Detectors: Devices operated below the superconducting critical temperature that can detect and/or resolve the energy of absorbed photons.
 Semiconductor Detectors: The most common electronic photon detectors in use today; in a semiconductor material absorbed photons generate electron-hole pairs which are then amplified.
 Biological Detectors: The most common photon detectors are biological (e.g., human eyes); it is possible that either biology-based detectors, bio-inspired detectors, or both will play a role in Detect.
 Hybrid / Other Detectors: Detect will investigate new designs with the potential for transformative progress. Teams are encouraged to investigate hybrid designs (combining two or more of the categories above, or combining existing and new designs) or completely new technology platforms.

Photons in the visible range fill at the minimum a cubic micron of space, which might seem to make them easy to distinguish and to count. The difficulty arises when light interacts with matter. A cubic micron of conventional photon-detection material has more than a trillion atoms, and the incoming light will interact with many of those atoms simultaneously. That cloud of atoms has to be modeled quantum mechanically to conclude with precision that a photon was actually there. And modeling at that massive scale hasn’t been possible—until recently.

“We want to know whether the basic physics of photon detection allows us, at least theoretically, to have all of the attributes we want simultaneously, or whether there are inherent tradeoffs,” Kumar said. “And if tradeoffs are necessary, what combination of these attributes can I maximize at the same time?” The Fundamental Limits of Photon Detection (Detect) Program will establish the first-principles limits of photon detector performance by developing new models of photon detection in a variety of technology platforms, and by testing those models in proof-of-concept experiments. “For decades we saw few significant advances in photon detection theory, but recent progress in the field of quantum information science has allowed us to model very large and complicated systems,” Kumar said. Advances in nano-science have also been critical, he added. “Nano-fabrication techniques have come a long way. Now not only can we model, but we can fabricate devices to test those models.”

The Detect program aims to create a fully quantum model of photon detection and then carry out proof-of-principle experiments to validate those models. It will also study the differences between various photon detection technologies. Current photon detectors, such as semiconductor detectors, superconductor detectors, and biological detectors have various strengths and weaknesses as measured against eight technical metrics, including what physicists refer to as timing jitter; dark count; maximum rate; bandwidth; efficiency; photon-number resolution; operating temperature; and array size. There is currently no single detector that simultaneously excels at all eight characteristics. The fully quantum model developed and tested in Detect will help determine the potential for creating such a device.

Is it possible for a new detector design to combine the best performance characteristics of all other detector technologies in a single device? Is it possible for a new design to far exceed current performance in all metrics, simultaneously? Or does a fundamental physics-based “tradespace” force performance tradeoffs between these metrics? If so, what are the boundaries of this tradespace? Is our current understanding of the theory of photon detection sufficient to answer these questions? Furthermore, the program seeks to develop detector designs for both free-space and guided-wave applications.

To become more pervasive in daily life, quantum technology needs to better detect single particles of light, called photons, carrying quantum information. The problem is that each photon is a very weak signal, making it difficult for measurement devices to efficiently detect them. Purdue University engineers have proposed a new quantum resource that could help design the next generation of single-photon detectors.

The type of quantum resource that the researchers discovered is called a “giant susceptibility,” which is a violent response of a system to a tiny perturbation. This response is necessary for converting a weak signal in the quantum domain to an amplified strong signal like those used by cell phones and other classical technology. In a paper published in NPJ Quantum Information, the researchers showed through a simulation that a system running on 100 computation units, called qubits, could exhibit a giant response when interacting with just one photon.

The research is part of the Defense Advanced Research Projects Agency’s DETECT program to design new single-photon detectors. The researchers will be working with their collaborators to test this approach experimentally. “Our search for better single photon detectors led us to an unorthodox concept of exploiting quantum phase transitions,” said Zubin Jacob, a Purdue associate professor of electrical and computer engineering.

A quantum phase transition occurs at the point where the spin orientation of the qubit system undergoes a dramatic change while interacting with a single photon. According to the researchers’ model, the giant response would only be unlocked when the multi-qubit system is engineered close to this quantum phase transition. “The detector itself is analogous to water in a microwave,” said Li-Ping Yang, a Purdue postdoctoral scholar who worked with Jacob on developing this model.

“A tiny disturbance to superheated water triggers an explosion releasing steam. Just as that giant release of steam could be used to detect the tiny disturbance, this multi-qubit system engineered near a quantum phase transition could help better detect a single photon.”

Patents related to this research have been filed through the Purdue Research Foundation Office of Technology Commercialization. DARPA DETECT funding for this work is associated with award number W911NF-18-1-0074.

DARPA issued SBIR project in 2014 to further improve upon the current state-of-the-art in nanowire single-photon detector performance while advancing the supporting technologies to allow for a compact, turn-key commercial system. New results in superconducting nanowire devices have shown that high detection rates, low dark-count rates (DCRs), and high efficiency are all possible simultaneously with operating temperatures between 1 and 4 K.

Despite these results, further performance improvements are needed. For example, detection efficiency (DE) above 90% and bandwidth (BW) approaching 1 GHz has yet to be achieved simultaneously. In addition, innovations leading to a reduction in the system footprint and improved operability will provide better accessibility of such technologies to the relevant scientific and engineering communities.

The final system should provide multiple (>2), independent single-pixel detectors with performance superior to all current commercially available options (DE>90%, BW~1GHz, DCR< 1 Hz) in a ~5U 19™ rack-mount package. To achieve these goals, work under this SBIR may include the following: efforts to increase fabrication yields through the use of new materials or fabrication techniques, new device designs to improve bandwidth and sensitivity, efforts to reduce system SWaP through compact, application-specific cooling systems, electronics, and packaging.

The detectors developed under this SBIR will have applications for the DoD which include secure communications and active stand-off imaging systems. The improved availability and SWaP will allow the use of these detectors in all relevant government labs and open the door to new fieldable systems. For example, low power, portable optical communication links exceeding RF system bandwidths by 10-100x may be possible using the technology developed under this SBIR.