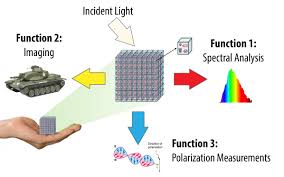 Optics & Electro-Optics areas through areas like Day vision, Night Vision, Thermal Imaging are playing vital role in warfare due to their high resolution and covert passive operation. The Infrared Search and Track system uses the heat or infrared radiation emitted by the target to provide passive means of detecting and tracking as well as generate data for the weapon system of an aircraft. Hyperspectral imaging sensors look at many spectra of light in closely spaced bandwidths can provide many details about the target like the kind of metal it’s made from, the color and type of paint it has, or the amount of moisture it contains.

The current generation of imaging systems are being developed based on well-established and seemingly immutable “laws” of optics design and physics Laws like Reflection and Snell’s Law. One widely considered pillar of optical design, for example, is that imaging systems must be built from a series of complex and precisely manufactured optical elements arranged linearly. Therefore, current high-resolution imaging systems may require dozens of large-area elements in order to achieve the desired spatial resolution requirements, making their design, manufacturing, assembly and alignment very difficult, and rendering optics and optomechanics heavy and sensitive to mechanical and thermal perturbations.

Metamaterials are composed of unit cells that are much smaller than the operating wavelength, allowing for greater manipulation of light. Early examples of metamaterials were used to design and build multifunctional elements that seemingly defied standard “laws” of reflection and refraction. These were limited in efficiencies and in sizes less than a millimeter, prohibiting their integration into optical systems.

EXTREME addressed these challenges by improving efficiencies of lenses based on metamaterials, expanded their apertures to centimeter-scale, developed methods to reduce the effect of optical aberrations, and explored new optical design space and associated tradeoffs in size, weight, and power (SWaP) afforded by such metalenses.

DARPA launched EXTREME program in 2016  with the  goal to develop new optical components, devices, systems, architectures and design tools using Engineered Optical Materials (EnMats) to enable new functionality and/or vastly improve size, weight, and power characteristics of traditional optical systems. EnMats are broadly defined to include, but are not limited to, metamaterials (both metallic and dielectric), scattering surfaces and volumes, holographic structures, and diffractive elements.

The program was soon able to enable revolutionary improvement in SWaP characteristics of traditional optical systems as well as allow for multiple imaging applications from a single lens.

DARPA said that the EXTREME project could introduce a new era in optics and imagers for national defense. EXTREME optical components would be lighter and smaller, enabling miniaturization of imaging systems for intelligence, surveillance, and reconnaissance (ISR) applications. The multifunctional nature of these devices could offer improvements in a wide variety of imaging systems by reducing size and weight without compromising performance for systems as diverse as night vision goggles, hyperspectral imagers, and IR search and track systems.

The EXTREME program aims to reinvent optical components, devices, systems, architectures, and design tools in the context of EnMats. Although some early EnMats (volume holograms, and diffractive/refractive hybrid devices) have existed for decades, the utility/capability of such structures has not been fully realized due to limited material properties and very limited incorporation into modeling, design, and optimization environments.

Early examples of EnMats have been used to design and build multifunctional elements and to dynamically control light, seemingly going beyond standard “laws” of reflection and refraction. The EXTREME program will explore this optical design space and aims to understand the trade-offs, and harness the possibilities, afforded by EnMats.

“We’ve seen significant technical advances in recent years in the communities of optical system design, materials science and fabrication, and multiscale modeling and optimization,” said Predrag Milojkovic, DARPA program manager. “EXTREME seeks to capitalize on this momentum by uniting these separate communities to revolutionize optics and imaging as we know it.”

The potential of EnMats is beginning to be demonstrated, due in large part to recent advances in modeling and fabrication techniques. Early examples of EnMats have, under constrained conditions, broken free from the standard “laws” of Reflection and Refraction. They have been used to design and build multifunctional elements as well as volumetrically and dynamically control light.

Volumetric EnMats are far less explored in comparison to surface-based EnMats, and represent a frontier challenge in this space, with huge potential for revolutionary breakthroughs. In addition, recent developments in modeling approaches and concepts for classifying the building blocks of engineered materials, are providing new insights and design methodologies. It is imperative that a unified approach is developed that encompasses the fabrication, modeling and simulation environments, and overall design methodologies to guide development of optimal optical architectures incorporating EnMats.

To achieve its objective, EXTREME is focused on developing new EnMats–both two-dimensional metasurfaces as well as 3D volumetric optics and holograms–that manipulate light in ways beyond classical rules of reflection and refraction. EXTREME also will address multiscale modeling to enable design and optimization of EnMats across vastly different scales, from nanometer to centimeter, for example.

A key program aim will be to demonstrate an optical system with engineered surfaces where control of light propagation is decoupled from a specific geometric shape, and can also be tuned. “EXTREME also seeks to demonstrate a volumetric optical element the size of a sugar cube or larger that can perform a multitude of functions simultaneously in [the visible] and infrared bands, such as imaging, spectrum analysis, and polarization measurements, among others,” announced the agency.

The project, says DARPA, will require formation of cross-cutting teams bringing together expertise from disparate communities and fields, including but not limited to engineered material design and fabrication, multiscale modeling/simulation/optimization, and optical system design.

TA1: Modifying the Principles of Conventional Optics – performers will analyze the limits to which EnMats can modify conventional light propagation laws defined as the laws typically used within the optical design process.  This includes, but is not limited to, the Law of Reflection, Snell’s Law, and Fresnel refraction/reflection coefficients. Theories, concepts, and techniques will be developed to address current limitations of EnMats in terms of efficiency, wavelength, bandwidth, polarization, and working numerical aperture

DARPA is challenging industry to exploit the emerging technology of engineered materials (ENMATS) that derive their optical properties from their structure and can behave in ways that “break away from traditional rules and “laws” that artificially constrain modern optics. One such technology that will be readily appreciated by any infantry soldier could result in practical night vision glasses a little thicker than an ordinary pair of sunglasses.

This technology is being developed by a team from the Australian National University (ANU) led by Professor Dragomir Neshev and exploits a phenomenon known as second harmonic generation to convert IR wavelengths to visible ones. Using tiny ‘nano-antennae’ in the form of discs of dielectric aluminium gallium arsenide crystals embedded in optically transparent material, incident IR light is mixed with a strong laser ‘pump’ beam to generate a new visible image. The conversion happens directly without an intermediate electronic stage, but does require batteries: “This is to power a laser diode that is needed for the conversion of the light from IR to visible. A laser diode of one Watt, similar to a bright battery-operated head torch, would be sufficient for several hours of operation,”

Prof. Neshev said. He added that a practical device for military use could be built within five years. Night vision technology in general and infantry systems in particular could be on the cusp of a revolution.

ICES is exploiting discoveries made under EXTREME to enable mounting multifunction sensors on low-cost platforms, such as UAS, to be deployed in contested environments. These smaller platforms have more stringent volume constraints and weight restrictions than legacy platforms, so adding a new sensor usually requires removing an existing one. The introduction of compact metalenses and planar optics for EO/IR capabilities disrupts the trade space, potentially enabling multiple sensors on a single platform, thus increasing capability.

AFRL is relying on EXTREME technology to modify the EO/IR systems on two developmental platforms: the XQ-58 and ALOBO. For the XQ-58, AFRL is looking to reduce the volume of existing sensors to make room for additional sensors. For ALOBO, AFRL is modifying the tube-launch compatible gimbal system. Advances in optics by DARPA and NGA allow AFRL to realize new trade space for the gimbal with either 10x reduction in SWaP while maintaining current performance or 4x improvement in resolution at current SWaP requirements.

“Through the NGA effort, AFRL developed unique capabilities using EXTREME technologies to characterize the optical performance of novel meta-optics and developed new insights into how they could be integrated into a full imaging system,” said Rohith Chandrasekar, program manager in DARPA’s Defense Sciences Office. “This work was also supported by Sandia’s MIRAGE tool, which is a first-of-its-kind capability developed under DARPA EXTREME and NGA Metalenses programs, that exploits symmetries to enable large-scale metalens design and optimization to meet performance metrics.”

“Transitioning this technology and design tools developed under the EXTREME program to AFRL SDCP programs has dramatically accelerated the development and demonstration of this technology and increased the impact of the development program.” EXTREME is a critical example of a successful partnership between DARPA, NGA, and AFRL to provide rapid transition from basic research to fieldable next-generation technology to support the warfighter.