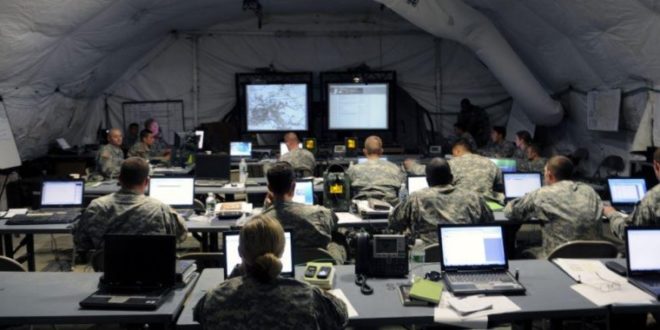 Rajesh Uppal January 30, 2022 AI & IT Comments Off on US DOD AIDA program will create AI tools for decision-making in All Domain Operations 70 Views

The emerging battlefield is a multi-domain battlefield which shall include all the traditional domains of land, air and sea as well as Cyber, Space, Low-Intensity conflicts, Information warfare including Psychological warfare and cognitive warfare shall be exploited by our adversaries simultaneously or in any desired combinations. The response of this multidomain battlefield needs to be met with integrated multidomain response by developing the capability to deliver effects across all domains.  Therefore, there is need to develop new doctrines, strategies, tactics, capabilities and training for this multidomain environment.

Implementing multi-domain operations requires is achieving integrated multi-domain command and control system (MDC2) that is the arrangement of personnel, information management, procedures, and equipment and facilities essential for the commander to conduct multi-domain operations. U.S. Air Force, under the direction of Chief of Staff Gen. David Goldfein, has made multi-domain command and control a top priority. Broadly speaking, this will involve the seamless integration of air, space, and cyber capabilities, providing commanders cross-domain options to make more rapid decisions in complex battle spaces. Military operators currently use manual processes to assess availability and coordinate use of sensors, communications, weapons, and other assets across domains.

Two DARPA-developed technologies – a novel decision aid for mission commanders and a rapid software integration tool – played a critical role in the recent Air Force demonstration of the Advanced Battle Management System (ABMS). The Adapting Cross-domain Kill-webs (ACK) program and the System-of-systems Technology Integration Tool Chain for Heterogeneous Electronic Systems (STITCHES) were among a number of technologies employed in the Sep. 2020  ABMS on-ramp demonstration, which involved attacks using live aircraft, ships, air defense batteries, and other assets. ACK is developing a decision aid for mission commanders to assist them with rapidly identifying and selecting options for tasking – and re-tasking – assets within and across organizational boundaries.

The Department of the Air Force is expanding its Advanced Battle Management System (ABMS) tech campaign to address top-level, department-wide modernization needs for both the Air and Space services — including AI tools; standardized, integrated IT; and data standards for all programs, not just ABMS.

The idea of the change is to shape “new concepts of operation and investments across a wide array of initiatives and programs – such as Commercial Satellite Integration, the next Advanced Battle Management System Capability Release, the Rocket Cargo Vanguard, and Agile Combat Employment logistics and resiliency programs – aimed to achieve integrated decision superiority and agile, distributed operations,” an Air Force press release elaborated.

One of the new focus areas, Dunlap told reporters today, is the use of AI, as the Air Force moves out to support the new Artificial Intelligence & Data Acceleration (AIDA) initiative, launched by DoD Deputy Secretary Kathleen Hicks, to help the military’s 11 inter-service Combatant Commands (COCOMS) rapidly bring onboard AI decision-making tools.

The Pentagon, and many commanders, see such AI-empowered software tools as critical to enabling America’s new way of war, All Domain Operations — being embodied in the Joint Warfighting Concept and the Joint All Domain Command and Control (JADC2) strategy.“I think our role in that is to operationalize AI as much as possible, which means a lot of investments in infrastructure data and so on,” Dunlap said.

For example, one of the big goals of the office’s July 8-28 “Architecture Demonstration and Evaluation (ADE)” exercise — formerly called “ABMS Onramps” — was to serve as a “bridge” in the transition of DARPA’s STITCHES (System-of-systems Technology Integration Tool Chain for Heterogeneous Electronic Systems) AI data ‘translator’ to the Air Force.

One of roughly 20 DARPA projects attacking various aspects of Mosaic Warfare, STITCHES had previously been used in the Air Force’s August ABMS “On Ramp” experiment. It will now officially transfer from DARPA to the Air Force as a program of record.

In addition, the tech demos and experiments are now being more tightly intertwined with operational experiments and exercises planned by the COCOMS and service-level Component Commands, Dunlap said. Thus, ADE-5 brought cutting-edge tech to bear in NORTHCOM’s Global Information Dominance Experiment 3 (GIDE 3) and Pacific Air Forces (PACAF) annual Pacific Iron 2021 exercise, both of which took place earlier this month. All 11 COCOMS participated in ADE 5, which was supported by the Pentagon’s Joint Artificial Intelligence Center (JAIC) and the office of the undersecretary for Intelligence & Security (OUSDI&S).

“It’s great to be able to have a technical thread that runs through all the operations and experimentation out there, and to be able to put arms around each of those capabilities to both inform future program budget decisions but also make updates to acquisition baselines and allow units to procure systems with their own dollars when they might not otherwise have been able to,” Dunlap said.

In June 2021, Deputy Defense Secretary Kathleen Hicks announced a new Artificial Intelligence & Data Acceleration (AIDA) initiative to help the military’s 11 inter-service Combatant Commands. The COCOMs command operational forces around the world, so their involvement is central to the military’s plans for a Joint All-Domain Command & Control (JADC2) meta-network linking forces across land, air, sea, space, and cyberspace. AIDA will be a centrally directed DoD effort to help the COCOMs, contrasting with the disparate service-led initiatives on AI and data.

AIDA’s objective is to help the COCOMs understand what data they use to make decisions, automate the data flow and create AI tools to streamline decision-making. The plan is to make use of already-scheduled COCOM experiments and exercises to try new capabilities in real-world environments; whatever works best will be left in place permanently for the command to use.

“Through successive experiments, we seek to understand the obstacles and challenges that impair our current ability to rapidly scale AI across the department and the joint force,” Hicks told the Joint AI Center conference this morning. As we complete these episodic exercises and experiments, we intend to leave behind capability in our wake.”

“A key part of an AI-ready department is a strong data foundation,” Hicks said. “Data enables the creation of algorithmic models, and, with the right data, we are able to take concepts and ideas and turn them into reality.”

The deputy secretary said she recently set forth a series of data decrees for DOD that will help the U.S. achieve the AI superiority it needs. “We will ensure that DOD data is visible, accessible, understandable, linked, trustworthy, interoperable and secure. To do so, I have directed key initial steps to ensure the department treats data as a strategic asset,” she said, adding these steps set DOD on a solid foundation — both ethically and organizationally.

The AIDA initiative will dispatch two different kinds of teams to COCOM HQs, Hicks said, one focused on data, the other on AI:

“Operational data teams” will go to COCOMs for longer-duration efforts on data. Their job is to “catalog, manage, and automate data feeds that inform decision-making” until those data feeds are “captured, completed, curated and usable.” In other words, they’ll figure out what data COCOMs are using, vet that data to make sure it’s both comprehensive and valid, and get it to move automatically to commanders and staffs in easily intelligible and readily usable forms.

Meanwhile, “flyaway teams of technical experts” will drop in on COCOMs to work on artificial intelligence tools. They’ll bring “top tier talent and technology” to apply AI to “streamline and automate workflows.” In other words, they’ll look at how the COCOMs use data to make decisions, then apply AI to improve those processes and automate what is currently laborious manual staff work. The teams will also gather information on what kind of network infrastructure upgrades the COCOMs need and what policies need to be changed to ease data sharing. Ultimately, Hicks said, the goal is to enable free flow of data across different COCOMs using open data standards, and real-time integration of data from different sensors and unmanned systems.

Semiconductors are materials that have a conductivity between conductors and insulators. They can be pure …