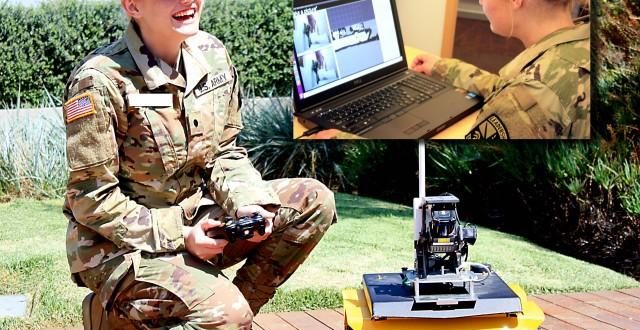 Since fully autonomous UAS are still far off, the  US Army has developed concept of Manned-unmanned teaming (MUM-T)  for operation in A2/AD environments. Through MUM-T operations they expect to combine the strengths of manned and unmanned  platform to increase situational awareness, allowing the armed forces to conduct operations that include combat support and intelligence, surveillance, and reconnaissance (ISR) missions. Today, users are harnessing these capabilities to extend the reach of their manned platforms as part of MUM-T. The teaming theory allows the man-in-the-loop to cover additional ground, complete additional actions, and communicate information and actions across the space quickly and efficiently.”

During the 2013 MUM-T Strategy Brief, the United States Army Aviation Centre (USAACE) defined MUM-T as: ‘The synchronized employment of soldier, manned and unmanned air and ground vehicles, robotics, and sensors to achieve enhanced situational understanding, greater lethality, and improved survivability.’ Donald Woldhuis and Michael Spencer explain MUM-T as ‘a standardized systems architecture and communications protocol that enables live and still images gained from the sensor payloads of Unmanned Aerial Systems (UAS) to be shared across a force’. MUM-T concepts of interest include those that operate in the ground, air, cyber, electronic warfare (EW) and/or multiple domains. Effective MUM-T operations will be dependent on viable solutions to the human-RAS interactions for reducing operator cognitive burden and optimizing human-RAS team performance.

The next generation of military robots will be much more intelligent with a high degree of autonomy, playing an ever-larger role in the military. Also, the problem of control becomes increasingly urgent. These military robots will become less simple remote sensors and tools and more teammates with which soldiers to interact at a much higher level. This level requires more advanced training for the soldiers to work with these machines. JUDI facilitates two-way verbal conversations between robots and soldiers to perform tasks. Conversational AI is the use of speech-based assistants or chatbots to automate communication which creates a personalized customer experience at scale. The technology also provides the robot, the ability to ask for clarification or to provide status updates as tasks are completed.

Dr Matthew Marge, a research scientist at the laboratory said that the dialogue will be a critical capability for these autonomous systems operating across multiple echelons of multi-domain operations so that soldiers across land, air, sea and information spaces can keep a situational awareness on the battlefield. JUDI allows soldiers to more easily team up with autonomous robots for the safe and effective completion of missions in scenarios like reconnaissance and search-and-rescue.

Researchers at the U.S. Army are working on two artificial intelligence projects to improve communications between warfighters and AI systems, C4ISRNET reported in August 2020. The Joint Understanding and Dialogue Interface (JUDI) and Transparent Multi-Modal Crew Interface Designs projects support the Army’s efforts for its next-generation combat vehicle modernization initiatives. JUDI is an AI system designed to understand a soldier’s intent when providing verbal instructions to a robot.

“We’re looking at ways of improving the ability of AI to communicate information to the soldier to show the soldier what it’s thinking and what it’s doing so it’s more predictable and trustworthy,” Brandon Perelman, a research psychologist at the ARL, said of the second project. “Because we know that … if soldiers don’t understand why the AI is doing something and it fails, they’re not going to trust it. And if they don’t trust it, they’re not going to use it.”

A military system cannot rely on a cloud connection or distant labeled databases, which were not secure and not available on the battlefield. JUDI uses a bespoke database to understand a soldier’s intention based on their spoken words. The dialogue processing uses a statistical classification technique that was trained on a small range of human-robot dialogue where humans initially stood in for the robot’s autonomy. Systems like JUDI not only need to be able to precisely control robots but also need to use situational awareness to evaluate their surroundings and request more information from a human teammate because of high-level needs and incoming data may be incomplete and ambiguous.

Researchers from the US Army Combat Capabilities Development Command’s (CCDC) Army Research Laboratory have developed the Joint Understanding and Dialogue Interface (JUDI) capability to transform soldier-robot interaction. For this capability, the researchers collaborated with the University of Southern California’s Institute for Creative Technologies (ICT). The JUDI capability enables bi-directional conversational interactions between soldiers and autonomous systems.

The goal is to shift the paradigm of Soldier-robot interaction from today’s heads-down, hands-full joystick operation of robots to a heads-up, hands-free mode of interaction where a Soldier can team with one or more robots while maintaining situational awareness of their surroundings. According to armymil.com, the effort supports the Next Generation Combat Vehicle Army Modernization Priority and the Army Priority Research Area for Autonomy through reduction of Soldier burden when teaming with autonomous systems and by allowing verbal command and control of systems.

The Department of Defense (DoD)-sponsored University Affiliated Research Center (UARC) ICT is working in collaboration with DoD services and organisations. The latest effort reduces Soldier burden when teaming with autonomous systems and by allowing verbal command and control of systems, supporting the Next Generation Combat Vehicle Army Modernization Priority and the Army Priority Research Area for Autonomy.

Instead of relying on pre-specified, and possibly outdated, information about a mission, dialogue enables these systems to supplement their understanding of the world by conversing with human teammates.” In this innovative approach, he said, dialogue processing is based on a statistical classification method that interprets a Soldier’s intent from their spoken language. The classifier was trained on a small dataset of human-robot dialogue where human experimenters stood in for the robot’s autonomy during initial phases of the research.

“JUDI’s ability to leverage natural language will reduce the learning curve for Soldiers who will need to control or team with robots, some of which may contribute different capabilities to a mission, like scouting or delivery of supplies,” Marge said.While commercial industry has largely focused on intelligent personal assistants like Siri and Alexa – systems that can retrieve factual knowledge and perform specialized tasks like setting reminders, but do not reason over the immediate physical surroundings,” Marge said. “These systems also rely on cloud connectivity and large, labeled datasets to learn how to perform tasks.” In contrast, Marge said, JUDI is designed for tasks that require reasoning in the physical world, where data is sparse because it requires previous human-robot interaction and there is little to no reliable cloud-connectivity. Moreover, he said, JUDI is a dialogue system adapted to autonomous systems like robots, allowing it to access multiple sources of context, like Soldier speech and the robot’s perception system, to help in collaborative decision-making.

CCDC Army Research Laboratory research scientist Dr Matthew Marge said: “Dialogue will be a critical capability for autonomous systems operating across multiple echelons of multi-domain operations so that soldiers across land, air, sea and information spaces can maintain situational awareness on the battlefield. “This technology enables a soldier to interact with autonomous systems through bidirectional speech and dialogue in tactical operations where verbal task instructions can be used for command and control of a mobile robot.”