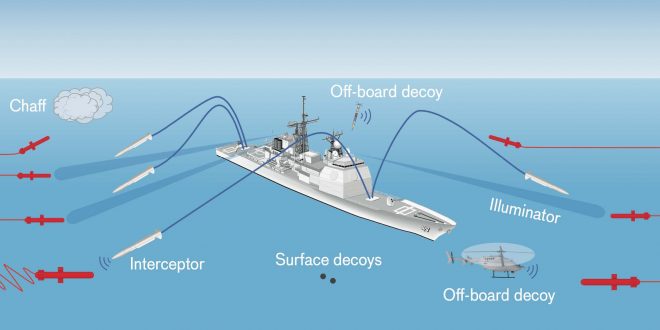 Militaries around the world are increasingly facing a formidable strategic threat environment in terms of complexity, lethality, range, sophistication, and number of threats. These range from Fifth-generation stealth fighters, unmanned air vehicles, and more maneuverable and precision-guided ballistic, cruise, and Hypersonic missiles that are becoming widely proliferated to become more accessible to emerging nations.

Hypersonic refers to aircraft, missiles, rockets, and spacecraft that can reach atmospheric speeds in excess of Mach 5, which is almost 4,000 miles per hour or 6,125 kilometers per hour or more.  Flying along the edge of space while gliding and maneuvering these missiles would strike targets with unprecedented speed and precision. They may be loaded with nuclear warhead to target cities and government centers. or non-nuclear packages which can be used to destroy facilities, communications, or weapons and generally cripple capabilities.  These missiles can also adjust direction very rapidly, meaning that it is almost impossible to tell where they will strike. Hypersonic missiles can also adjust mid-air to change targets. The high maneuverability and the hypersonic speed make it very difficult to be intercepted by exo-atmospheric kill vehicles as well as lessens the time it can be detected, fired at, or re-engaged if there is a miss.

Militaries across the world are conducting research activities to identify the various applications of artificial intelligence in air defense, with many of these technologies either already being deployed or currently under testing.

Artificial Intelligence technologies aim to develop computers, or robots that match or exceed the abilities of human intelligence in tasks such as learning and adaptation, reasoning and planning, decision making and autonomy; creativity; extracting knowledge and making predictions from data. AI is enabling many military capabilities and operations such as intelligence, surveillance, and reconnaissance, identifying targets, speed weapon development and optimization, command and control, logistics and developing war games.

AI in Air and Missile Defense

AI systems can accurately analyze huge amounts of data generated during peace and conflicts. It can quickly interpret information, which could lead to better decision-making. It can fuse data from different sensors into a coherent common operating picture of the battlefield. AI systems can react significantly faster than systems that rely on human input; Therefore, AI is accelerating the complete “kill chain” from detection to destruction. This allows militaries to better defend against high-speed weapons such as hypersonic weapons which travel at 5 to 10 times the speed of sound.

As faster and more maneuverable threats emerge, the missile defense mission becomes harder. “The unpredictability … is very challenging,” he said. “It challenges your sensor architecture, it challenges your fire control and it challenges the methods by which you engage.  AI could enable the U.S. military to accelerate response times and reduce the probability of human error, Missile Defense Agency Director Vice Adm. Jon Hill noted during remarks at the Center for Strategic and International Studies in Washington, D.C.

Sarah Reeves, vice president of missile defense systems at Lockheed Martin’s space division, said there needs to be a better integration and multi-domain fusion of data. Leveraging machine learning and machine-to-machine interfaces to buy more time for warfighters to make decisions is one way to get after the problem posed by hypersonic weapons, she noted.

The UK’s Royal Navy is testing the accuracy and effectiveness of artificial intelligence (AI) to defeat missile attacks for the first time at sea. The test of the leading-edge software is being done against supersonic, ballistic, as well as cruise missiles during the largest exercise of its kind off the coasts of Scotland and Norway, the navy said. The trial, that offers a glimpse of the future of air defence at sea, is part of NATO’s Formidable Shield exercise and involves three British warships — destroyer HMS Dragon and two frigates HMS Lancaster and HMS Argyll .

The trial, being led by Defence Science and Technology Laboratory (DSTL) scientists, is testing two AI applications — Startle and Sycoiea, the Royal Navy said in a statement published in its official online news outlet. The Startle application provides real-time recommendations and alerts to sailors monitoring the “air picture” from the operations room. It is designed to help “ease the load” on sailors. And the Sycoiea builds on these alerts to help sailors identify the threat and advise the best weapon to deal with it quickly “than even the most experienced operator.”

During the trial Seaman Sean Brooks aboard HMS Lancaster said he was impressed by the cutting-edge software. “I was able to identify missile threats more quickly than usual and even outwit the operations room,” he said. Experiments with AI have been conducted before, but it’s the first time the system is being tested against live missiles, said Lancaster’s Weapon Engineer Officer Lieutenant Commander Adam Leveridge. “A glimpse into our highly autonomous future.”

The navy is testing these AI-based applications to be able to harmonise their response and look for improvements needed to ensure they work alongside existing radar and other systems. Lancaster’s Commanding Officer Will Blackett said the scale of the naval exercise and the assets and technology involved made it a hugely beneficial experience for all.

Advances in artificial intelligence (AI) and deep learning techniques, in conjunction with rapid growth in GPU hardware performance have opened up new possibilities for exploitation of AI to perform highly complex tasks with performance exceeding that of more traditional approaches. Potential applications within the Army Integrated Air and Missile Defense (IAMD) system include Identification and Classification of tracked objects, Defense Design, and Dynamic Planning and Tasking.

To support AI / Deep Learning-based applications, the Army requires a robust, scalable architecture, framework and algorithm engine that can be utilized by multiple AI applications in an easily maintainable and extensible manner. The architecture and framework should include a combination of hardware and software that has a straightforward path of integration with current IAMD systems. The AI Engine should support integration and execution of multiple, simultaneous AI applications, as well as the ability to ingest, store, and process significant amounts of data. In addition to execution, the architecture, framework and engine should support training of the algorithms, which minimizes hardware and software costs as well as permits on-the-fly enhancements to the different applications.

Researchers at the Air Force Early Warning Academy in China have claimed to have developed artificial intelligence-based technology that can predict the course of hypersonic missiles even as they approach their target at five times the speed of sound, South China Morning Post (SCMP) reported.

According to the claims made by the Chinese military researchers, their A.I-based system can determine the incoming missile’s potential kill trajectory and initiate a counter-response with a three-minute lead time. The researchers have also published a paper regarding this system in the Chinese journal Journal Of Astronautics, SCMP reported.

According to the researchers, an average hypersonic missile stays within a target zone of 5 miles (8 km), which is quite narrow for a weapon that can traverse distances very rapidly. In addition to this, the missile, however fast, still needs to follow the laws of physics, and every little move it makes to steer away from air defenses while in the air will give off signals about the design, capabilities, and mission.

The researchers plan to use a machine-learning algorithm to learn from the data captured from the early stages of hypersonic flight to determine its probable course in the final stages. While speaking to SCMP, one of the researchers admitted that the data from the early warning system contained a lot of noise, making it difficult for the AI to trace the incoming threat.

So, the team developed a unique deep learning algorithm that can remove noise from the signal and works like the human brain to focus on the latest, most important data. The result is a sophisticated A.I. program that can predict the trajectory of hypersonic missiles but needs only the computing power of a laptop to do its job. The results can be determined in as few as 15 seconds, the researchers claim.

AI-enabled unmanned aerial vehicles (UAVs) can be used in air patrol or ground alert interceptor roles to develop an integrated air defence system. The UAVs can be deployed for short-range intercept missions and work in conjunction with crewed aircraft to deliver the required data and intelligence.

The human crew will be responsible for developing the engagement strategy and selecting targets while AI can be deployed to perform other tasks such as manoeuvring the aircraft and dogfight tactics.

AI-enabled co-pilots or virtual pilots can help human pilots in manoeuvring an aircraft in challenging environments by analysing and processing data faster and delivering key insights. They can also help in improving efficiency and effectiveness during search and rescue operations.

Researchers at the US Air Force’s Air Combat Command’s U-2 Federal Laboratory developed an AI algorithm known as ARTUµ that flew along with a pilot on board the U-2 Dragon Lady aircraft. The algorithm was trained to execute in-flight tasks such as sensor employment and tactical navigation that would have been otherwise executed by the pilot.

Ireland has set up research teams to explore disruptive solutions including an AI co-pilot to improve the fire extinguishing capability of rotary-wing aircraft.

AI has the potential to recreate real-life environments and scenarios in real-time using digital twins, which can be used to identify the best approach in a high-risk situation. The digital-twin approach can help in capability development by designing, testing and running mission simulations.

AI-based computer vision algorithms can analyse images and data collected by drones in real-time to perform safety and inspection missions and identify hostile activity. If a target is identified as hostile, computer vision can be used by targeting systems that use guided missiles and anti-aircraft missiles can operate with more accuracy using computer vision systems.

AI can help in reducing the workload of engineers and maintenance personnel who perform routine checks of aircraft by enabling them to visualise damages in 3D with a high level of accuracy.

Semiconductors are materials that have a conductivity between conductors and insulators. They can be pure …