Device as a service (DaaS) is becoming future of business hardware

The work-from-home needs of employees due to COVID-19 could help drive big changes in how laptops and other devices are sold. Digital transformation and the work-from-home movement may not be the only big technology trends gaining strength due to the COVID-19 pandemic of 2020. Also picking up traction in the business IT marketplace in the last six months is the Device-as-a-Service (DaaS) model of acquiring hardware without having to buy, configure, and manage it.

From an increased need for portable devices to security concerns, there are many reasons for this. According to HP’s recent report, 92% of IT decision-makers are changing the types of computers they are buying.  For example, HP’s report found that 56% of IT decision-makers will buy a higher proportion of portable computers vs. desktops and 35% of IT decision-makers plan to buy devices with security built into the BIOS when they upgrade their hardware. But, in difficult economic times, many organisations won’t have the CapEx budget they need for this hardware refresh. 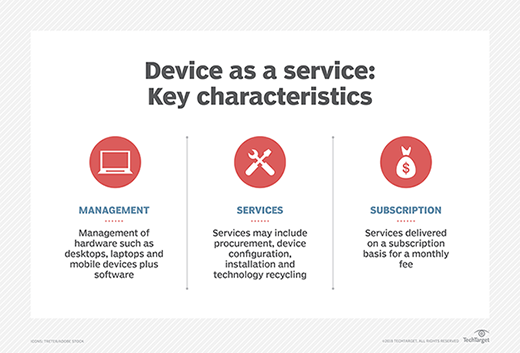 Device as a device (DaaS) eliminates this up-front cost by offering of PCs, smartphones and other mobile computing devices as a paid service. DaaS eases the IT needs of a company by way of outsourcing the hardware, software and management of the equipment to external providers.DaaS crucially shifts the cost from the CapEx to the OpEx column on the financial controller’s spreadsheet.

Subscribing to a DaaS provider would allow an organization to scale up and down physical devices as needed and update to newer hardware more frequently and quickly without much strain on the organization itself. It’s not just IT organizations that can make use out of DaaS offerings. Other structures like schools can use DaaS, where school boards can order the same amount of tablets or computers as they have students.

In 2015, no major PC manufacturers offered a DaaS option to acquire hardware, according to a recent report from Accenture. But by 2019, that changed dramatically, with 65% of major PC makers offering DaaS options to their customers.

DaaS services begin with a contract with a DaaS vendor that states the hardware, software, services, amounts and lengths of time required. Payment is normally on a per-device basis. Some OEMs will have a DaaS offering and will offer a somewhat limited number of choices from their overall device lineup. Users cannot replace hardware they are using from a DaaS vendor at any time they wish. Typically, a contract will state two to three year timelines for replacing devices.

Some of the more tedious, time-consuming IT management jobs should also be handled by your DaaS provider, such as hardware and software inventory management and compliance reports. For example, HP’s Proactive Management with TechPulse provides insight reports with analytics on planning, cost optimisation and service management capabilities for all devices using the service. These are divided into four different categories – hardware, security, software and incidents.

DaaS can host a variety of benefits, to IT organizations. These benefits include the ability to scale devices up and down as needed.  For companies, it essentially streamlined the process of quickly enabling a large number of at-home workers that companies didn’t have in the past.

DaaS arrangements also include product support from vendors or partners as needed. With DaaS, vendors take laptops, desktop PCs, and other devices and preconfigure and customize them with productivity and security applications as well as value-added services to ready them for business or consumer customers. More devices are being offered under DaaS, each with hardware lifecycle management services included. Software and hardware management services include device backups, asset tracking, security and end of life disposal. 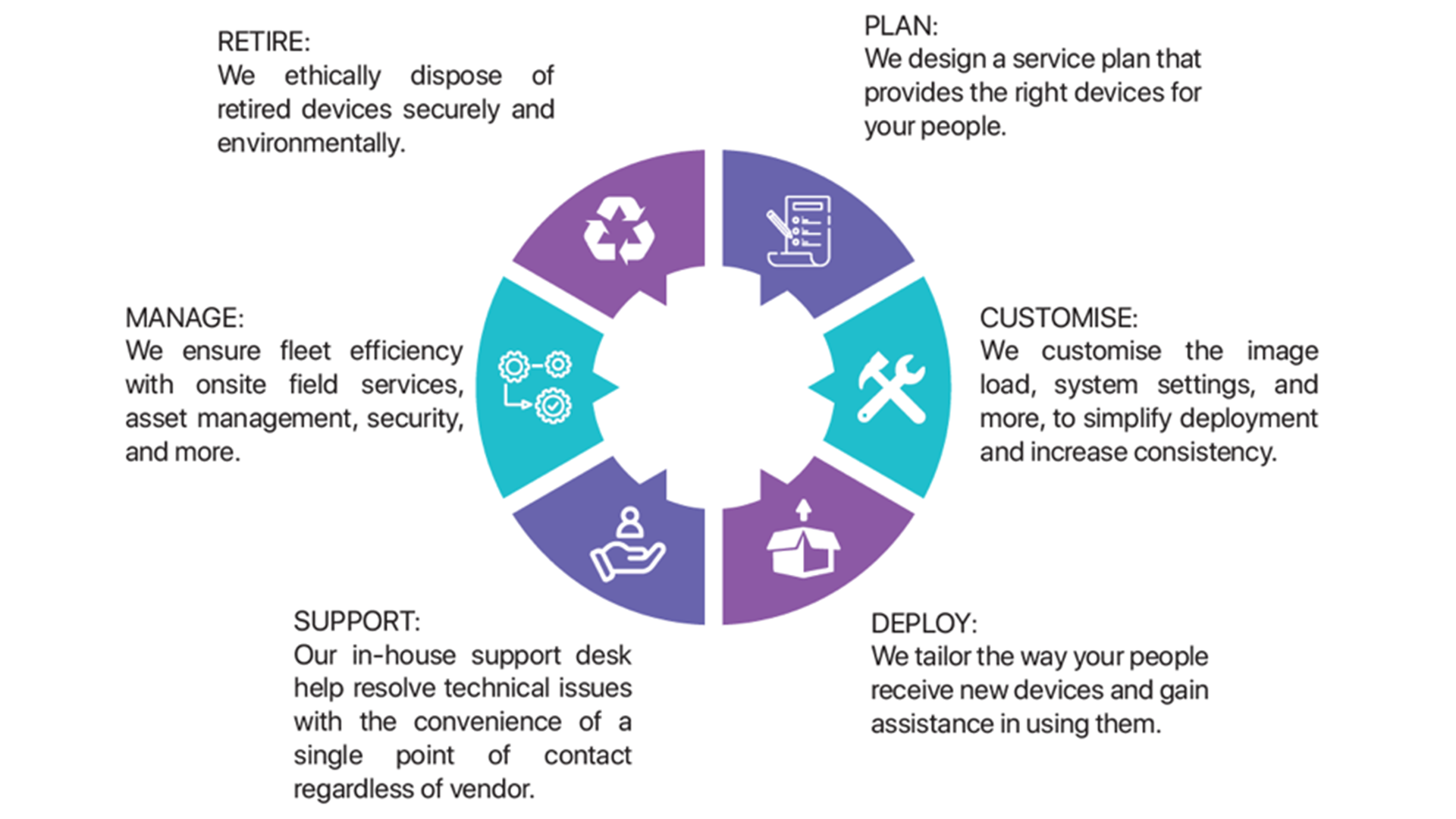 It reduces workload on IT staff to configure devices and provides automatic management of patches and updates. You should also be able to configure custom images that are deployed across your company, in much the same way you might if you were managing your own hardware deployment. Your DaaS provider may even be able to help with remote assistance and password recovery, meaning your IT team isn’t bogged down with calls to its own helpline.

It decreases downtime due to accidents, the broken device get replaced within a day outfitted with all applications and personal data. The sooner employees have access to their devices, the sooner they can get back to work. It improved Employee Productivity leaving  device maintenance and support to subscription partner to handle , they can turn their own attention to strategic projects that produce more revenue for the business. Typically, a device subscription engagement will include the creation of personas, helping to ensure that all users have the devices and applications they need to do their jobs — preventing scenarios where workers have to put in requests to IT to access important tools and then wait for approval.

And while this can all be beneficial for users, the DaaS model also provides a mix of big benefits and real challenges for hardware vendors, Kevin Dobbs, the leader of Accenture’s Everything-as-a-Service practice explained. First, because customers use the devices until they are done with them, the vendors get them back and can collect, refurbish, and resell them to new users up to four more times over the useful life of the devices, which maximizes returns on investments, according to Dobbs. “For vendors, it’s a great option because rather than only selling a product one time, they can sell them up to five times,” Dobbs said. “The benefit is that by keeping control of the devices and surrounding them with different kinds of services and capabilities each time you can give more to customers. In the hardware business, margins are thin, but here you sell it over and over. That’s why we think this is an exciting trend.”

Security of Device as a service (DaaS)

As the remote revolution unfolds, companies that allow employees to use personal devices for work are making themselves more vulnerable to cyber attacks. Since the outbreak of the Covid-19 virus, the FBI has reported a 300 percent increase in cybercrimes. As internet activity has surged, criminals have found inventive ways to target and exploit people online, including staff using personal devices to access company databases or programs.

Personal devices do not have the same level of protection as corporate-approved devices and create gaps in an overall protective strategy – no matter how robust it is. One study actually found that 60 percent of employees use personal file-sharing apps and/or personal devices to access and share company information. That means more than half of staff are jeopardizing the wider security of a business. Perhaps the biggest threat posed by personal devices is that corporate data is exposed and can be sold or used as ransom. Other liabilities associated with personal device use are employees deliberately stealing data or accidentally adding harmful codes to computer networks; or from an employers’ perspective, tracking employees’ location outside of work hours or accessing workers’ personal files.

Then there are the security benefits of moving to DaaS. Because DaaS is an all-inclusive managed solution under a single point of contact, it comes with its own cyber defense toolkit. Put simply, it is pre-loaded with the necessary defenses to bridge the gaps in cybersecurity created by personal device use. DaaS providers are part of the movement towards ‘preventative’ cybersecurity, as opposed to the previous ‘responsive’ mentality. DaaS companies are typically experts in security and are responsible for ensuring that all the distributed devices have up-to-date security software installed, and function as part of a comprehensive security strategy. DaaS models are equally effective because in-depth health monitoring is applied to software across devices, which is then used to control access to online services, and to produce reports confirming that devices don’t have malware.

Even further, DaaS has the potential to assure that an entire fleet of devices adhere to businesses’ security policies in terms of passwords, account access, and approved apps. Overall, DaaS makes device management more transparent and trackable, meaning high-risk behaviors can be identified and curbed as soon as possible. Not to mention, it provides analytics around the performance of devices, so is better prepared to replace or upgrade hardware that could be dangerous for cybersecurity.

Unified Endpoint Management (UEM) can add an even greater layer of security to DaaS services by enabling customers to manage the complete lifecycle of devices over-the-air and in real-time. For example, back in 2017, HP DaaS incorporated UEM solutions to combine the strength of the platforms and shape the next generation of device consumption for customers.

Integrated with DaaS devices, UEM can provide 360-degree protection for all content and apps, and utilize mobile threat detection to thwart pending cyber attacks. It can also be personalized according to business needs and block undesirable websites or actions, or alternatively cherry-pick secure websites and remove access to any other URLs. When combined with DaaS, UEM can boost security on a granular level, encrypting passcodes and devices that prevent unauthorized entry. At the same time, UEM admins can create open-in policies that stop content or apps being opened from unmanaged sources – i.e. personal devices.

Extra security advantages that emerge from UEM integration with DaaS systems is the ‘remote data wipe’ option, which takes place when devices are lost or stolen and halts sensitive information being leaked. UEM is also capable of restricting data being transferred between and from devices via Bluetooth, USB, and tethering.

Many providers will offer fleet management services, allowing you to locate and remotely lock missing devices. If a laptop is reported stolen, your DaaS provider’s dashboard may allow you to sound an alarm on the device or remotely wipe any sensitive data stored on it, ensuring all the thieves get their hands on is the device itself. And it’s not just the dangers of physically losing your devices that DaaS providers protect against, many now offer top security against the ever-evolving and growing risk of cybercrime. HP Proactive Security provides endpoint security with isolation technology, security and threat analytics, and expertise to help organisations ensure their security is as strong as it can be.

The final benefit is related to the problem that may drive many companies to consider DaaS in the first place: keeping everything up to date. DaaS providers will not only replace hardware when it reaches end of life, but keep the software running on those devices up-to-date too. DaaS providers can look after Windows patch management, ensuring that devices aren’t exposed to security flaws or missing new features. Some DaaS providers will also keep third-party software updated, meaning your critical business applications don’t fall several versions behind the current update.

Two primary examples of DaaS include offerings from HP and Microsoft. HP offers a DaaS option called HP Device as a Service, which has device options ranging from commercial notebooks, desktops and specialized devices. It has even expanded to offering hardware outside of HP’s own hardware such as Apple Macs, iPhones and iPads.