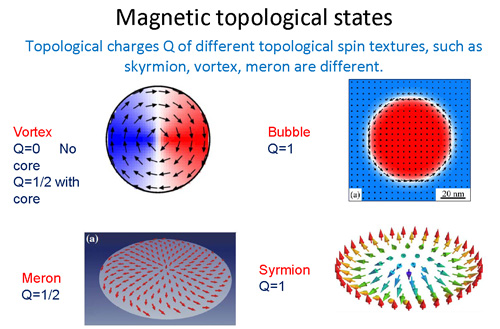 In magnetic memories, information (for example, a collection of bits) is stored as clusters of spins, which are either an up or a down (or put differently, a one or a zero). These spin clusters, which form the basis of magnetic memories, become less stable when reduced in size. Magnetic storage becomes increasingly volatile and less efficient as it decreases in size, creating significant barriers for high-performance computation and information processing. As market forces drive electronic and mechanical devices to become smaller and smaller, there is a rapidly intensifying need for high-density and energy-efficient magnetic information storage.

DARPA’s Topological Excitations in Electronics program, announced in 2017, aims to investigate new ways to arrange these moments in novel geometries that are much more stable than the conventional parallel arrangement. If successful, these new configurations could enable bits of data to be made radically smaller than possible today, potentially yielding a 100-fold increase in the amount of storage achievable on a chip. It could also enable designs for completely new computer logic concepts and even for topologically protected “quantum” bits—the basis for long-sought quantum computers.

Now, a team of Ohio State researchers has received a $6.34 million award from the Defense Advanced Research Projects Agency (DARPA) to develop novel magnetic materials by unlocking the power of skyrmions, nanoscale spin textures that offer promise for storage miniaturization. The team is based at the Center for Emergent Materials (CEM), a National Science Foundation (NSF)-funded Materials Research Science and Engineering Center. The three-and-a-half-year award period runs from Feb. 1, 2018, through July 31, 2021.

The Ohio State collaborators are one of a handful of successful teams to win this award in an international competition as part of DARPA’s Topological Excitations in Electronics (TEE) program. TEE endeavors to design materials with new, controllable functionalities in memory, logic, sensors and quantum information processing — all having critical implications for the nation’s economic, energy and defense security.

Randeria says that skyrmions, topologically stable spin textures, could be the key for creating smaller magnetic information storage that is still stable and efficient. He says a skyrmion is like a nanoscale “whirlpool” of spins in the magnetization texture. Skyrmions behave like particles that can be created, moved and manipulated, and they are stable at room temperature. As a result, they offer great promise for magnetic information storage in miniaturized applications.

In addition, skyrmion-based memories are likely to be more energy efficient than conventional magnetic memories, meaning that a smaller current is needed to read, write or manipulate the information.

“You want magnetic storage to maintain stability and robustness. You want it to be immune to fluctuation so it’s not volatile,” Randeria says. “You also want to be able to store as many bits as possible in a small area so you can miniaturize, and you want energy-efficient ways to manipulate these bits. Skyrmions seem to satisfy all of these criteria.”

Challenge of miniaturization of Magentic storage

Many people who use computers and other digital devices are aware that all the words and images displayed on their monitors boil down to a sequence of ones and zeros. But few likely appreciate what is behind those ones and zeros: microscopic arrays of “magnetic moments” (imagine tiny bar magnets with positive and negative poles). When aligned in parallel in ferromagnetic materials such as iron, these moments create patterns and streams of magnetic bits—the ones and zeros that are the lifeblood of all things digital, says DARPA

These magnetic bits are stable against perturbations, such as from heat, by a form of strength in numbers: any moment that inadvertently has its orientation reversed is flipped back by the magnetic interaction with the rest of the aligned moments in the bit. For decades, engineers have been able to increase computing capabilities by shrinking these magnetic domains using advances in manufacturing and novel techniques for reading and writing the data.

In recent years, however, it has become clear that this approach cannot go on indefinitely. As it turns out, moments start to wobble out of alignment when the size of the bit gets too small and the interaction energy keeping them aligned is exceeded by the surrounding thermal energy making the all-important digital bits unstable and unreliable for storage or logic. For a number of high-performance electronic devices, that thermodynamic requirement for magnetic bit size—called the superparamagnetic limit—is about to be reached, meaning that eking out more memory in the same amount of space will no longer be possible.

As the spin clusters become smaller and smaller, the memory becomes volatile,” says Mohit Randeria, professor of physics and principal investigator on the DARPA grant. “Even minor fluctuations due to thermal disturbances at room temperature could lead to spin directions flipping and information being lost.”

“We’ve known for some time that there are some magnetic interactions that favor the magnetic moments being canted in a v-shape rather than the parallel arrangement, which yield a much more stable structure than having them all in parallel,” said Rosa Alejandra “Ale” Lukaszew, a program manager in DARPA’s Defense Sciences Office. “The canted interaction doesn’t allow the electrons to line up parallel to each other, so in order to fit them in a small region they must be configured in a special pattern. These unique geometric patterns, called topological excitations, are very stable and maintain their geometry even when shrunk to very small sizes. But only recently have we had the multiscale models, advanced metrology tools, and understanding of proper material combinations to fully explore this phenomenon.”

Another unique characteristic about topological excitations is that they can be moved at significant speed with a small amount of current, allowing for fast read and write operations if, for example, they are placed on a track that runs in front of a read/write head, Ale said. Such an approach would make it possible to explore novel, 3-D approaches to chip design, enabling storage capabilities of 100 Terabits per square inch, 100 times more than the current limit of 1 Terabit per square inch in laboratory demos.

A key goal of the program is to demonstrate topological excitations smaller than 10 nanometers at room temperature for memory applications. Currently there is preliminary research data showing that it is possible to create skyrmions (a particular type of topological excitation) of this size but only at very low temperatures, Ale said. The smallest sizes achieved to date at room temperature are 10s of nanometers, one to two orders of magnitude larger than the new program’s goal. However, sizes less than 10 nm are theoretically possible if the right materials can be found.

“If you can move these skyrmions very fast with low currents, then you also have the possibility of implementing logic,” Ale said. “You’re now not only getting into the memory business, you’re also getting into the processor business, because then you can implement a completely different paradigm for all the typical digital logic gates. If we can achieve sizes smaller than 10 nanometers at room temperature, we want to determine how controllable they are for memory and logic, their sizes, and their dynamics—this whole design space has to be explored. If we demonstrate that these things can move as fast as we think they can, then we could have logic that can go beyond 1 Terahertz, which is the limit right now.”

The program will also explore different materials in the quest for the right properties, as well as other topologically protected states for applications to quantum bits, for example.

“Magnetic materials are not the only type of material that can sustain topological excitations,” Ale said. “There are oxides that can sustain this type of excitation but with charge rather than magnetic moments, so the program is open to other approaches. If there is a possibility of creating skyrmions smaller and with less energetic requirements in an oxide, that could be more interesting than magnetics. And although our focus is on memory storage and logic, if the community has novel ideas for other applications, we’re listening.”

If the research shows topological excitations can achieve the expected gains in memory, processing speed, and power savings, it could eventually have tremendous application to military systems. Manned and unmanned aircraft could fly with much less battery weight on board, allowing them to fly longer and farther, and troops would have fewer batteries to carry on missions, lightening their load, Ale said.

The Topological Excitations in Electronics program aims to demonstrate the utility of topological excitations in various applications including memory, logic, sensors, and quantum information processing. Developing the ability to design materials with new controllable functionalities is crucial for the future of the Nation’s economic, energy, and defense security.

An opportunity exists at the intersection of topology and condensed matter physics where a rich and robust platform emerges for studying novel ground states and quasiparticles with properties beyond that of simple electrons. Many such excitations have topological properties that can be leveraged to engineer superior (e.g., low power and more stable) characteristics compared to the conventionally used charge and spin degrees of freedom. New materials that display novel spin-charge coupling and quantum coherent properties driven by topology at surfaces/interfaces have enormous potential for low power, spin-based, charge based, and quantum coherent technology.

The development of this new approach has the prospect of overcoming the natural limits faced by current device technology (e.g., superparamagnetism) and of creating entirely new forms of computation and other applications. For example, topological magnetic skyrmions are promising for low-power memory and/or logic architectures due to their small size and potential for manipulation using ultra-low current densities. On the other hand, topological quantum computation offers revolutionary breakthroughs in coherence stability. Various materials heterostructures may be leveraged to implement robust quantum logic. Devices based on this phenomenon have the possibility to revolutionize the understanding of quantum matter and materials.

The Topological Excitations in Electronics program seeks expertise in materials science (to address the goal of achieving <10nm TEs at room temperature); physics (to address possible interactions leading to topological excitations of interest as well as suitable metrology to investigate them), chemistry (to address suitable materials combinations), engineering (to develop proof of concept structures to establish applications of topological excitations for memory and logic), enabling multi-function materials, integrated design optimization, and efficient power use.