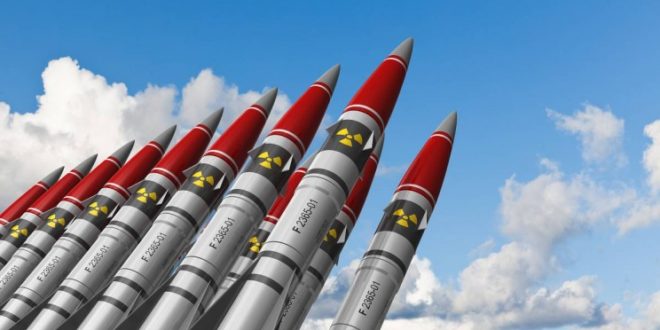 Neutron Beams can detect Nuclear Warheads and disable them

Despite making reductions in their arsenals, both the USA and Russia have extensive and expensive programmes under way to replace and modernize their nuclear warheads, missile and aircraft delivery systems, and nuclear weapon production facilities. The Nuclear Race between US, Russia, and China through their continuous modernization of all the three legs of their strategic Triad, after collapse of INF treaty has enhanced Nuclear war threat.  Even when countries such as US Russsia sign arms reduction pacts, they do not typically grant inspectors complete access to their nuclear technologies, for fear of giving away military secrets.

There is another risk, these stored nuclear warheads might not be deliverable in a war, but they could still be stolen, sold, or accidentally detonated, with disastrous consequences for human society. “There’s a real need to preempt these kinds of dangerous scenarios and go after these stockpiles,” says Areg Danagoulian, an MIT nuclear scientist. “And that really means a verified dismantlement of the weapons themselves.”

Danagoulian also emphasizes the seriousness of nuclear weapons disarmament. A small cluster of several modern nuclear warheads, he notes, equals the destructive force of every armament fired in World War II, including the atomic bombs dropped on Hiroshima and Nagasaki. The U.S. and Russia possess about 13,000 nuclear weapons between them. “The concept of nuclear war is so big that it doesn’t [normally] fit in the human brain,” Danagoulian says. “It’s so terrifying, so horrible, that people shut it down.”

Now MIT researchers led by Danagoulian have successfully tested a new high-tech method that could help inspectors verify the destruction of nuclear weapons. The method uses neutron beams to establish certain facts about the warheads in question — and, crucially, uses an isotopic filter that physically encrypts the information in the measured data.

Neutron sources are an essential component for the detection and identification of nuclear materials, mineral and petroleum exploration, nuclear reactor analysis, and nuclear waste monitoring. Neutron spectroscopy techniques allow for a nondestructive and remote measurement of these materials. These neutron sources when having sufficient power can also act as particle beam weapons.

Military already uses neutron generators for  detecting buried explosives at a distance, because neutrons easily penetrate most materials (they have no electric charge to interact with and a lot of mass to give them momentum) but will stop and generate a distinctive burst of gamma rays when they hit high-density materials like explosives. The problem with current systems is their range is very short, anywhere from one meter to 20-plus depending on the size of the explosive and the depth to which it’s buried.

This is because traditional neutron generators shoot off neutrons indiscriminately in all directions, the same way a light bulb emits light. That means the neutrons spread out rapidly, in fact exponentially (specifically, divide strength at the source by the square of the distance). Very soon, there are too few of them hitting any particular target to trigger enough gamma radiation to detect.

Physicist William Dent has invented neutron beam generator  technology and briefed its potential to the Army and industry here. Dent’s electron beam generator, however, shoots out all its electrons along the same path, like a laser beam. As a result, the number of neutrons hitting the target stays high even at a distance. Just how far depends on the power you put in and the quality of your aiming system.

Like high explosives, nuclear warheads are extremely dense, made of plutonium or uranium. So, like conventional explosives, nuclear explosives are dense enough to stop neutrons that would go through most ordinary materials, and once the neutrons hit, they generate a distinctive burst of gamma rays. By zapping incoming radar contacts with neutron beams, missile defenders could tell which were decoys and which were real warheads, allowing them to target the real threat.

Now MIT researchers led by Danagoulian have successfully tested a new high-tech method that could help inspectors verify the destruction of nuclear weapons. The method uses neutron beams to establish certain facts about the warheads in question — and, crucially, uses an isotopic filter that physically encrypts the information in the measured data.

The experiments consisted of sending a horizontal neutron beam first through a proxy of the warhead, then through a an encrypting filter scrambling the information. The beam’s signal was then sent to a lithium glass detector, where a signature of the data, representing some of its key properties, was recorded. The MIT tests were performed using molybdenum and tungsten, two metals that share significant properties with plutonium and served as viable proxies for it. The test works, first of all, because the neutron beam can identify the isotope in question.

“At the low energy range, the neutrons’ interactions are extremely isotope-specific,” Danagoulian says. “So you do a measurement where you have an isotopic tag, a signal which itself embeds information about the isotopes and the geometry. But you do an additional step which physically encrypts it.”

That physical encryption of the neutron beam information alters some of the exact details, but still allows scientists to record a distinct signature of the object and then use it to perform object-to-object comparisons. This alteration means a country can submit to the test without divulging all the details about how its weapons are engineered.

“This encrypting filter basically covers up the intrinsic properties of the actual classified object itself,” Danagoulian explains. It would also be possible just to send the neutron beam through the warhead, record that information, and then encrypt it on a computer system. But the process of physical encryption is more secure, Danagoulian notes: “You could, in principle, do it with computers, but computers are unreliable. They can be hacked, while the laws of physics are immutable.”

The MIT tests also included checks to make sure that inspectors could not reverse-engineer the process and thus deduce the weapons information countries want to keep secret. To conduct a weapons inspection, then, a host country would present a warhead to weapons inspectors, who could run the neutron-beam test on the materials. If it passes muster, they could run the test on every other warhead intended for destruction as well, and make sure that the data signatures from those additional bombs match the signature of the original warhead.

For this reason, a country could not, say, present one real nuclear warhead to be dismantled, but bamboozle inspectors with a series of identical-looking fake weapons. And while many additional protocols would have to be arranged to make the whole process function reliably, the new method plausibly balances both disclosure and secrecy for the parties involved.

Danagoulian believes putting the new method through the testing stage has been a significant step forward for his research team. “Simulations capture the physics, but they don’t capture system instabilities,” Danagoulian says. “Experiments capture the whole world.” In the future, he would like to build a smaller-scale version of the testing apparatus, one that would be just 5 meters long and could be mobile, for use at all weapons sites.

“The purpose of our work is to create these concepts, validate them, prove that they work through simulations and experiments, and then have the National Laboratories to use them in their set of verification techniques,” Danagoulian says, referring to U.S. Department of Energy scientists.

Karl van Bibber, a professor in the Department of Nuclear Engineering at the University of California at Berkeley, who has read the group’s papers, says “the work is promising and has taken a large step forward,” but adds that “there is yet a ways to go” for the project. More specifically, van Bibber notes, in the recent tests it was easier to detect fake weapons based on the isotopic characteristics of the materials rather than their spatial arrangements. He believes testing at the relevant U.S. National Laboratories — Los Alamos or Livermore — would help further assess the verification techniques on sophisticated missile designs.

A paper detailing the experiments, “A physically cryptographic warhead verification system using neutron induced nuclear resonances,” is being published today in Nature Communications. The testing took place at the Gaerttner Linear Accelerator (LINAC) Facility on the campus of Rensselaer Polytechnic Institute, using a 15-meter long section of the facility’s neutron-beam line. The research was supported, in part, by a U.S. Department of Energy National Nuclear Security Administration Award.