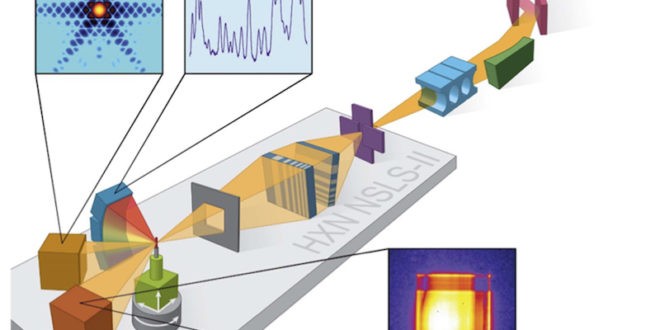 An X-ray, or, much less commonly, X-radiation, is a penetrating form of high-energy electromagnetic radiation. Most X-rays have a wavelength ranging from 10 picometers to 10 nanometers, corresponding to frequencies in the range 30 petahertz to 30 exahertz (30×1015 Hz to 30×1018 Hz) and energies in the range 124 eV to 124 keV. X-ray wavelengths are shorter than those of UV rays and typically longer than those of gamma rays.

Hard X-rays can traverse relatively thick objects without being much absorbed or scattered. For this reason, X-rays are widely used to image the inside of visually opaque objects. The most often seen applications are in medical radiography and airport security scanners, but similar techniques are also important in industry (e.g. industrial radiography and industrial CT scanning) and research (e.g. small animal CT). The penetration depth varies with several orders of magnitude over the X-ray spectrum. This allows the photon energy to be adjusted for the application so as to give sufficient transmission through the object and at the same time provide good contrast in the image.

X-rays have much shorter wavelengths than visible light, which makes it possible to probe structures much smaller than can be seen using a normal microscope.

Since the wavelengths of hard X-rays are similar to the size of atoms, they are also useful for determining crystal structures by X-ray crystallography. This property is used in X-ray microscopy to acquire high-resolution images, and also in X-ray crystallography to determine the positions of atoms in crystals.  By contrast, soft X-rays are easily absorbed in air; the attenuation length of 600 eV (~2 nm) X-rays in water is less than 1 micrometer.

A new multimodal hard X-ray scanning microscopy technique that can image features down to 10 nanometres could be used in materials-science studies. The technique, which works by focusing hard X-rays with two crossed multilayer Laue lenses and raster scanning a sample, is ready for use in routine measurements, say its inventors.

Scanning hard X-ray microscopy (SHXM) is used to image nanostructures because X-rays can resolve much finer details than visible light. Their penetrating power also allows access to deeper layers in a sample, which is useful for 3D tomographic imaging of structures such as biological cells, semiconducting chips, batteries and many other functional materials. But this high penetration also means that X-rays pass straight through conventional lenses without being bent or focused.

Apart from X-ray mirrors, which are limited in their convergence and that need to be mechanically polished, thus making them expensive, an alternative way to bend X-rays is to use crystals. To do this, researchers today make use of tailor-made artificial crystals consisting of different material layers to sharply focus X-rays. These crystals are known as multilayer Laue lenses (MLLs), named after the German physicist Max von Laue who discovered 100 years ago that crystal lattices diffract X-rays.

In Aug 2021, The U.S. Defense Advanced Research Projects Agency (DARPA) sent out research proposals for the development of x-ray technology capable of what the agency calls “extreme photon imaging,”    As part of its Extreme Photon Imaging Capability — Hard X-Ray (EPIC-HXR) project, DARPA said it is looking to develop uncooled hard x-ray imagers based on advanced nanocrystalline materials with high spatial and energy resolution, including quantum dot and perovskite material.

Nanocrystalline materials including quantum dot and perovskite material systems have garnered substantial interest because of their many desirable properties such as tunable bandgap energies, quantum confinement, multi-exciton generation, and phonon quenching. Such materials hold promise as high-performance photon absorbers operating at room temperature and can be tailored to the hard x-ray region of the electromagnetic spectrum where many applications of interest exist. In addition, these materials are often amenable to solution processing techniques which could allow low-cost imagers to be produced with small pixel sizes by avoiding hybridization with complementary metal oxide semiconductor or emerging indium gallium zinc oxide readout circuitry.

DARPA said that hard x-ray imagers could be used in a variety of applications, including medical imaging, nondestructive testing, elemental analysis, and part qualification. Such device technology has broad applicability within and without the DoD including non-destructive test and evaluation, elemental analysis, part qualification, and high contrast medical imaging.