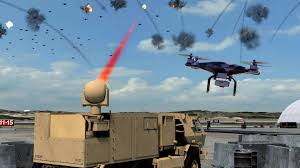 The  drones have emerged as a major new threat to civilian infrastructure and military.  The militant organizations have started employing drones to further their terrorism. Jihadi groups fighting the Syrian government – most notably ISIS and Jabhet al-Nusra – are extensively using advanced drones to pinpoint the Syrian Army’s locations, find out about troops deployment, and film suicide attacks and propaganda footages. The Sep 2019  attack on Saudi Arabia’s oil facilities knocked out half of its oil production. Just this month, 18 suicide drones struck Saudi Arabia’s Abqaiq oil processing facility, the largest of its kind in the world, causing significant damage. Saudi Arabian air defenses were completely ineffectual in responding the attack, This had driven military and security agencies to actively scout for adequate defence systems.

One of the attractive Anti-drone weapons have been directed energy weapons (DEWs) both of electronic type and laser weapons. DEW have also been spotted at U.S. military bases on the front lines against the Islamic State, and the Air Force has disclosed it downed a IS drone through “electronic measures”.

Thus, today’s laser weapons are meant to defend against swarms of inexpensive mortar rounds, drones and other projectiles, and are intended to be mounted on platforms which are mobile and self-contained (meaning they may not have ready access to an external source of power). This gives rise to several design imperatives.

First, they must deliver a low cost per engagement; it’s simply not economically feasible to employ an expensive weapon (such as a missile costing over $100,000) to knock out a drone which costs $1,000, or a mortar round which might cost less than $100. The laser weapon must also be capable of rapid fire so that it can’t just be overwhelmed by a large number of simultaneous incoming rounds.

Also, rapid fire reduces the number of individual laser weapons systems needed to protect a given number of troops. But, the ability to deliver rapid fire also necessitates that the system be electrically efficient. Otherwise the laser weapon will require access to a large quantity of fuel, which is difficult (and dangerous) to transport into a battlefield.

C-RAM (Counter Rocket, Artillery and Mortar)  systems intended to be deployed in the battlefield to protect troops and equipment from incoming projectiles. Currently, these are envisioned to be single, vehicle mounted lasers, with output powers in the 10 kW to 50 kW range.

Boeing has already successfully prototyped such a system, which they call the High Energy Laser Mobile Demonstrator (HEL MD). This consists of a 10 kW solid state laser installed on an Oshkosh Tactical Military Vehicle, along with all the necessary targeting and control systems. HEL MD has proven the ability to lock on to and destroy a mortar round of about 10 inches in length, traveling at hundreds of miles per hour, from several miles out. The system is also effective against Unmanned Aerial Vehicles (UAVs or drones); in this case, it may be sufficient to damage the drone’s navigation and targeting systems, rather than completely destroy it.

“Both the Army and commercial industry have made substantial improvements in the efficiency of high-energy lasers — to the point where we can get militarily significant laser power onto a tactically relevant platform,” said Dr. Craig Robin, RCCTO Senior Research Scientist for Directed Energy Applications. “Now, we are in position to quickly prototype, compete for the best solution, and deliver to a combat unit.”

US DOD has issues a SBIR for  development of  advanced image processing algorithms for the detection and tracking of small Unmanned Aerial Vehicles (UAVs) and Mortars in low Signal-to-Noise Ratio (SNR) and cluttered environments. The specific platform of interest for this topic is a ground-based High Energy Laser (HEL) weapon system.

Many military weapon systems rely on passive thermal infrared sensors (MWIR/LWIR) for target detection and tracking. In many cases, the maximum detection range of these sensors are limited by the ability of the image processing algorithms to detect and extract a target of interest.Typical HEL acquisition sensors employ a passive MWIR camera with a wide-field of view (3 degrees).

Dim targets such as small Unmanned Aerial Vehicles (UAVs) and mortars are extremely difficult to detect and track due to the low contrast in the thermal imagery, or low signal-to-noise ratio (SNR). High clutter environments such as cloud or tree backgrounds also increase the difficulty in target detection and tracking.

The proposed algorithms must be able to process imagery in near real-time to be applied to military applications (Threshold: 300Hz bandwidth, Objective: 1kHz bandwidth). The algorithms must be written so that multiple targets (Threshold: 1 target, Objective: 10 targets) can be detected and tracked at a time. If successful, advanced algorithms for target detection and tracking will benefit many military applications.

Many military weapon systems rely on passive mid-wave infrared (MWIR) technology for wide-field of view acquisition and precision tracking of targets. These MWIR sensors were selected for operation in clear visibility conditions and provide performance margin down to hazy and light fog conditions, but are severely degraded under heavy fog, rain, snow, sand and dust storm conditions.

Recent studies have shown that radio frequency (RF) sensors can perform the same functions as the MWIR sensors, but do not suffer the same performance losses in these degraded visual environments (DVEs). However, current RF technology is too expensive, too large and requires too much power to use as a replacement for these MWIR sensors.

The challenge is to develop a truly low cost RF acquisition and tracking sensor with reduced Size, Weight and Power (SWaP). Performance examples are acquisition and tracking of Unmanned Aerial Vehicles (UAVs) and rockets, artillery and mortars (RAM) on the order of 5km or less in clear weather and DVEs. The proposed system must have a field of view and angular accuracy that would enabled replacement of a passive wide-FOV MWIR sensor (>3° FOV; <300 urad accuracy).

Interferometers are preferred (in order to achieve the angular resolution needed), but other RF concepts will be considered. Because these RF sensors will be used to replace infrared cameras, which require very little SWaP, reducing the total system footprint is extremely important. Man-portability would be ideal.

The proposed sensor must be capable of integration onto a mobile platform with other military capabilities such as a Stryker, and require minimal power that can be supplied through the vehicles on-board power system. For example, multiple small flat panel RF arrays can be integrated into the side of a tactical vehicle. If successful, low-cost reduced SWaP RF sensors would significantly benefit many military and commercial applications such as High Energy Laser weapon platforms, small-satellite tracking applications, and the commercial aviation industry.

Future laser weapon applications will range from very high power devices used for air defense (to detect, track, and destroy incoming rockets, artillery, and mortars) to modest power devices used for counter-ISR. The Phase III effort would be to design and build a low-cost reduced SWaP RF acquisition and tracking sensor that could be integrated into the Armys High Energy Laser Mobile Tactical Truck (HEL-MTT) vehicle.

Lockheed Martin has completed the design, development and demonstration of a radical 60 kW laser weapon for the U.S. Army. The Lockheed Martin laser system is now being shipped to the US Army Space and Missile Defense Command/Army Forces Strategic Command in Huntsville, Alabama for more testing.

Delivery of this laser represents an important milestone along the path to fielding a practical laser weapon system,’ said Paula Hartley of Lockheed Martin’s Cyber, Ships & Advanced Technologies line of business. ‘We have to make sure the lasers work and do the full set of scopes against the threats we project. And those threats include the counter-rockets, counter-artillery and counter-mortar as well as [Unmanned Aerial Vehicle] and cruise missile threats.

Lockheed Martin’s laser is a beam combined fiber laser, meaning it brings together individual lasers, generated through fiber optics, to generate a single, intense laser beam. This allows for a scalable laser system that can be made more powerful by adding more fiber laser subunits. The laser is based on a design developed under the Department of Defense’s Robust Electric Laser Initiative Program, and further developed through investments by Lockheed Martin and the U.S. Army into a 60kW-class system.

In 2015, the company used a 30kW fiber laser weapon, known as ATHENA, to disable a truck from a mile away. Earlier military security experts successfully managed to stop a truck in its tracks by destroying its engine with a laser using the lower powered system. The 30-kilowatt fibre laser called Athena burnt through the manifold in seconds, despite being fired by a team from Lockheed Martin positioned more than a mile away. The security firm said the test signifies the next step to fitting lightweight laser weapons on military aircraft, helicopters, ships and trucks.

We have shown that a powerful directed energy laser is now sufficiently light-weight, low volume and reliable enough to be deployed on tactical vehicles for defensive applications on land, at sea and in the air.’ According to Afzal, the Lockheed Martin team created a laser beam that was near ‘diffraction-limited,’ meaning it was close to the physical limits for focusing energy toward a single, small spot. The laser system also proved to be highly efficient in testing, capable of translating more than 43 percent of the electricity that powered it directly into the actual laser beam it emitted.

The Army is also developing a mobile high-energy solid-state laser program called the High Energy Laser Mobile Demonstrator, or HEL MD. The weapon mounts a 10 kilowatt laser on top of a tactical truck. HEL MD weapons developers, who rotate the laser 360-degrees on top of a Heavy Expanded Mobility Tactical Truck, say the Army plan is to increase the strength of the laser up to 100 Kilowatts, service officials said. “The supporting thermal and power subsystems will be also upgraded to support the increasingly powerful solid state lasers. These upgrades increase the effective range of the laser or decrease required lase time on target,” an Army statement said.

Dynetics, a wholly owned subsidiary of Leidos (NYSE:LDOS), is playing an integral role in the U.S. Army’s weapon modernization initiatives, where the latest directed energy weapon is increasing its power from a 100 kW-class system to a 300kW-class system. Marking the official transition to the Indirect Fires Protection Capability – High Energy Laser (IFPC-HEL) endeavor, in January, the U.S. Army modified the existing contract to support on-going efforts to increase laser capability.

In late 2019, the U.S. Army Rapid Capabilities and Critical Technologies Office (RCCTO) also announced a High Energy Laser Scaling Initiative (HELSI) contract award by the Office of the Secretary of Defense (OSD) that will support the IFPC-HEL effort. These design initiatives follow the progress made on the High Energy Laser Tactical Vehicle Demonstrator (HEL-TVD), and brings greater capability to our nation’s warfighters.

As the prime contractor for IFPC-HEL, Dynetics is set to demonstrate a 300 kW-class prototype system in FY22. The company will lead final assembly, integration, and testing. The solution will provide continued support to defend against hostile unmanned aerial systems and rockets, artillery, and mortars. The IFPC-HEL prototype will inform the U.S. Army’s effort to field prototype units with residual combat capability by 2024.

“This contract modification proves Dynetics’ agility and responsiveness to warfighter needs,” said Scott Stanfield, Dynetics director of strategic programs. “Scaling these proven technologies puts us on track to demonstrate and deliver the 300 kW-class prototype system and support the delivery of this revolutionary capability to our men and women of the operational Army by 2024.” Dynetics was awarded the $130 million contract to build and test HEL-TVD in May 2019. The HEL-TVD critical design review was completed in early November 2019, signifying the completion of the demonstrator program.