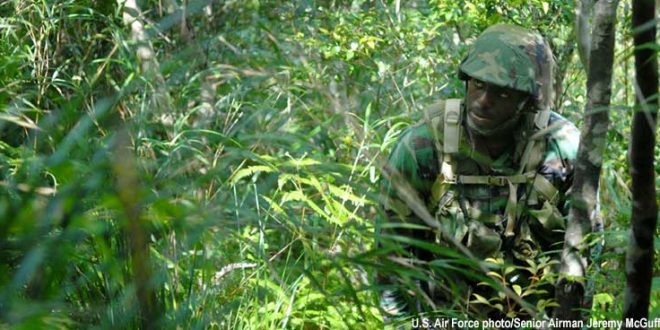 In such situations using a tethered system is problematic. They are cumbersome, have limited range, and can snag or break as the robot maneuvers around obstacles or inadvertently runs over the cable. Analog radios suffer greatly from multi-path interferences and fading. Wireless broadband digital communications, on the other hand, have proven to be much more robust and versatile. However, their high operating frequencies require a line of sight (LOS) to the control station—a requirement that is difficult to maintain in many environments. This problem can be somewhat alleviated by proper antenna placement and signal amplification, but these methods are limited by real estate and spectrum-use regulations, respectively.

Researchers have proposed a system that will allow the mobile robot to carry multiple relay radios that are automatically deployed when and where needed in order to maintain robust communications. This process is completely transparent to the operator and is entirely handled by the ad-hoc network formed by the relay radios. The system is plug-and-playable and can be attached to many manned and unmanned vehicles requiring long-range and non-LOS operational capability.

Soldiers, operating in urban environments also have similar challenges of the unreliability of radio communications. Buildings and other obstacles absorb, reflect, and diffract radio signals, causing signal loss or attenuation, and creating a generally highly complex signal propagation environment that is difficult to accurately predict.

DARPA launched the LANdroids solution to this problem by deploying small inexpensive robotic relay nodes that position themselves intelligently to relay signals to warfighters moving through these settings to conduct their operations. The goal of the DARPA LANdroids program is to develop technologies to enable the warfighter operating in dense urban environments to rapidly deploy and maintain a vital communications infrastructure. This infrastructure is composed of a system of multiple LANdroids mobile communications relay robots that form a reconfigurable communications backbone in support of operations.

The principal goal of the LANdroids program (2007-2010) was to validate the concept that mobile tactical radio relay platforms can provide improved communications connectivity in non-line-of-sight communications environments such as urban terrain. The first phase of the program demonstrated that intelligent mobile relays can provide improved system performance in network configuration, optimization, and self-healing, and the second phase added additional capabilities including intruder detection and situational awareness, and included a real-world demonstration to potential users

The significance of the LANdroids program is that several techniques for intelligent robot movement were evaluated, including a kinetic-state machine approach, that implemented a decentralized decision-making process and a “playbook” technique, that modified pre-defined configurations according to the situation and environment.

DARPA awarded Robotics company iRobot Corp.  an R&D contract for LANdroids Program in 2008. Through this multi-year robotics research and development program, iRobot will develop a new portable communications relay robot that is small, inexpensive, intelligent and robust.  This robot will be small enough that a single dismounted warfighter can carry multiple robots, inexpensive to the point of being disposable, robust enough to allow the warfighter to drop and throw them into position, and smart enough to autonomously detect and avoid obstacles while navigating in the urban environment.

“More than 1,300 of iRobot’s field-tested and combat-proven PackBot robots have been deployed in theater delivering mission-critical support to warfighters around the globe,” said Helen Greiner, co-founder and chairman of iRobot. “Research and development awards such as the DARPA LANdroids program enable us to continue driving innovation towards the next-generation of revolutionary mobile, tactical combat robots that deliver advanced situational awareness and help keep warfighters out of harm’s way.”

The Defense Advanced Research Projects Agency (DARPA) invited small businesses to submit innovative research concepts in May 2021 in the technical domains of Electronics, Information Systems. In particular, DARPA is interested in understanding the feasibility of SQUad Intelligent Robotic Radio Enhancing Links (SQUIRREL) and are looking for proposals for small, lightweight, low-power robotic devices.

Small military units conducting hostage rescue, scouting and training missions depend on radio communications to coordinate actions with each other and their commanders. In some areas, such as in caves or jungles with heavy foliage, mobile radio frequency (RF) communications are difficult to sustain. Small military units operating in triple-canopy jungles such as tropical rainforests face particularly difficult conditions for mobile radiofrequency (RF) communication due to attenuation from layers of wet foliage.

Recent developments in RF mobility gain – the technique of moving radios to locations where they can better access power for transmission — have made it possible to construct a dense, 3D mesh network of radio relays that can support and augment communications for reconnaissance and hostage rescue missions, for example. The Defense Advanced Research Projects Agency wants to explore this technology and is looking for solutions that will allow small groups of warfighters to communicate even in the thickest jungles where wet foliage makes radio transmission particularly difficult.

SQUIRREL seeks innovative solutions that have four criteria. First, they are intended for a squad of no more than eight members. Second, they maintain connectivity among the team as they move and maintain connectivity with higher echelons. Finally, they also minimise size, weight, and power (SWAP).

DARPA expects SQUIRREL solutions will use climbing, flying or hybrid robots to form a self-positioning 3D mesh network that can maintain small-squad communications through a combination of repositioning, frequency selection and beamforming, or focusing a signal toward a receiver. These devices should be quiet, difficult to observe and unlikely to be detected or intercepted.

Additionally, the mesh network must adapt as the squad moves through the terrain, allowing the nodes or devices to experience the best chance of establishing line-of-sight access to drones or other overhead assets to connect for communications with unit commanders. SQUIRREL systems should be designed to support both amongst members of the small unit as well as connecting into the larger U.S. Department of Defense (DoD) grid.

For SQUIRREL, communication is presumed to be of two distinct types: inter-team and reach back. In jungles, the dielectric properties of wet foliage attenuate point-to-point communications to the degree that WWII communications in tropical jungle used long strings of wire as a transmission medium. SQUIRREL research must extend the range of wireless mobile communication in such terrain to give teams more freedom of operation. Reachback is establishing connectivity to U.S. communications assets, as available. Important success criteria for reach back include providing team status to higher command and providing situational awareness and directives to the team.

The programme will take place in three phases. In the first phase, the proposers have to demonstrate the feasibility of the technology through evidence of a basic prototype system, definition and characterization of properties desirable for both DoD and civilian use, and comparisons to competing approaches. Proposers must provide documentation to the feasibility described above has been met as well as the potential commercial applications.

In the second phase, they have to develop SQUIRREL solutions that use robots that have capabilities for locating, self-positioning, and free-space optical means to reach drones or other overhead assets to meet the reach back objective. Proposers must provide distributed control of a set of SQUIRREL nodes to achieve the primary system objectives and demonstrate an area of coverage advantage versus a non-SQUIRREL system.

During Phase 2, proposers will execute the Research and Development (R&D) plan as described in the proposal. They will also complete a commercialisation plan that addresses costs, suppliers, market opportunity, anticipated positioning, and unique intellectual property.

In the last phase, the proposed SQUIRREL needs to have a plethora of DoD use cases demanding communication for small unit operations in the triple-canopy jungle. DARPA also expects the technology can be used for civilian search and rescue, such as aiding in searchers for lost children or hikers.

SQUIRREL also needs to provide new capabilities to commercial entities with applications that use radio frequency links and distributed control of radio relays.  DARPA expects the technology can also be used for civilian search and rescue, such as aiding in searchers for lost children or hikers. SQUIRREL solutions could also support organizations exploring tropical and densely foliated areas to count endangered species or identify new sources of pharmaceuticals.