The Russians unveiled their new doctrine last Sunday on board the frigate Admiral Gorshkov, and in the presence of President Vladimir Putin.
“The degree of Russia’s economic involvement in the global [economy] has increased in recent years. At the same time, rivalry for owning the resources of the World’s Oceans and developing them has escalated and international competition for the maritime transportation of cargo has increased,” Russian Security Council Deputy Secretary Mikhail Popov told reporters.

He explained the adjustment of the Russian Maritime Doctrine with the changed “global conditions and socioeconomic situation in the country, new threats and challenges to security, new areas of research and development and modern technologies.”

Maritime Doctrine-2015 divides Russian naval policy between six regions: Atlantic, Arctic, Antarctic, Caspian, Indian Ocean, and Pacific. Within each region the doctrine assesses four naval functions: operations, transport, marine science, and the development of natural resources. The focus of the doctrine is on two of these regions: the Arctic and the Atlantic.

In January, NATO announced the creation of six command centres in eastern member states as part of a response to what it called “Russian aggression” in Ukraine. “Our attention towards the Atlantic is justified by the expansion of NATO in the east,” Mr Rogozin, told Russian news agencies. Russia will guarantee a permanent naval presence in the Mediterranean and boost its strength in the Atlantic and Arctic under a new strategy to counter “unacceptable” NATO expansion.

The doctrine also makes special mention of the Arctic, calling for expansion of Russia’s Northern Fleet to protect claims to natural resources on the Arctic shelf and secure the northern sea route between the Atlantic and the Pacific.
The document has a new provision, “Antarctic Regional Vector”, “Previously, Antarctic exploration tasks were included in the Indian Ocean regional vector of the national policy

China and Russia are developing their “all-round strategic partnership”, which covers political, economic, security, diplomatic and military cooperation. Regarding the Pacific, the amended naval doctrine, which will be valid till 2020, underscored that friendly ties with China in the Pacific were one of the cornerstones of Moscow’s new policy.

In parallel, the Russo-Japanese ties are also now under increasing strain. Earlier this month, Russian Defence Minister, Sergei Shoigu announced that troops on Kuril islands, disputed by Japan, will be rearmed.
“Cooperating with China and other countries in the region is a crucial part of carrying out the nation’s maritime policy,” Russia’s maritime strategy stressed.

The doctrine underscored friendly relations with India in the Indian Ocean, as well as other forces in the region, as key parts of Russia’s national marine policy.

To take account of the implementation time and existing/forecast resource and technology restrictions, the creation of the new-model navy has been divided into three phases: up to 2020; 2021-2030; and 2031-2050. The content of each phase was outlined by Adm Chirkov for the various elements of the navy.

What also concerns Putin’s Russia is the fact that the United States is considering stationing ground nuclear cruise missiles in Europe. Russia is upgrading and modernizing, all of the three legs of their strategic triad to provide a strong deterrent against different perceived adversary threats.

Russia’s sea-based nuclear deterrent currently relies on Delta 4 submarines, soon to be augmented by eight new-generation Borei-class submarines. Up until 2020 the maritime strategic nuclear force will focus on completing the development and launching of its fourth-generation Borey-class (Project 955/955A) SSBNs, while maintaining its remaining Delta III/IV-class (Project 667BDR/667BDRM) SSBNs in operational service.

During the 2021-2030 phase work will proceed on replacing the Delta class with fourth-generation SSBNs. Within this second phase Russia will also work on developing a new ship-based (in fact submarine-based) strategic missile system and a fifth-generation SSBN class. The doctrine sets out that series production of the fifth-generation SSBN will then commence in the final 2031-2050 phase.

Russia’s surface fleet has so far not enjoyed the same level of investment as its submarine fleet. This is going to change in future as Russia is moving forward towards a pursuing of an active global policy and considers its surface fleet as part of this policy.

The navy’s future surface fleet is to be divided between long-range multirole vessels and short-range vessels with modular capabilities. Looking ahead, the service intends to field a multi-service naval strike force capable of quick relocation to threatened areas.
Russian is set to initiate work on its nuclear destroyer “Leader” in 2017. After commissioning of the “Leader”, Russia will become the only country in the world that has in its fleet, ships of the destroyer class with nuclear powered engines.

Russia does not have the possibilities of creating a global system of bases and facilitating supplies, which the Western countries have. Construction of surface ships with nuclear power plants is a realistic answer to this problem. Their use will allow the Russian fleet to be present in any part of the world
The marine rapid-response force is intended to be capable of conducting missions in the maritime, aerial and land domains in any part of the world. For this, new aircraft carriers will be the core of its capability, along with multirole landing ships.

Russia is developing its own aircraft carrier that will run on nuclear power, according to a spokesman for the country’s United Shipbuilding Corporation. “Research conducted by the Nevskoye Design Bureau indicates that the sole way of meeting the Navy’s requirements, such as power generation, sea endurance and voyage range is to equip the ship with a nuclear power plant.”

Work to design a new class of Russian aircraft carrier is to be completed before 2020, with construction and entry into service planned for the second phase of the doctrine (2021-2030).

Unlike the heavy aircraft cruisers of the previous generation of Russian aircraft carriers, the new carrier design will be multirole. It is envisaged to be equipped with manned and unmanned combat systems operating in the air, at sea, underwater and possibly in space. The carrier’s air groups will include radar surveillance and C2 aircraft, alongside reconnaissance and strike UAVs.

In the first phase Russia’s Admiral Gorshkov-class (Project 22350) frigates and Steregushchy-class (Project 20380) corvettes and their variants will become the core of the surface force for long- and short-range operations.

In the mid term a new-generation destroyer featuring advanced strike, air defence and missile defence capabilities will become the navy’s main oceangoing ship. Between 2021 and 2030 a new class of modular multirole surface combat ship will be designed and enter series production as the successor to the Project 22350/20380 classes. It is envisaged that these will be armed with novel weapon systems and will carry unmanned vehicles of various sorts.

Additionally, the doctrine seeks to create a general-purpose marine force armed with long-range and high-precision strike systems capable of providing a non-nuclear deterrent.

The general-purpose marine force inventory will include in its first phase the creation of a strategic non-nuclear deterrent force, enhancements to its SSN and diesel-electric submarines (SSKs), the build-up of the inventory and capability of its surface forces, and the creation of the new marine rapid-response force.

In the mid term the non-nuclear deterrent will be provided by Yasen-class (Project 885M) SSNs and Oscar-class (Project 885M) nuclear-powered guided missile submarines (SSGNs). The Yasen class are next-generation hunter-killer submarines, which hunt enemy submarines and surface ships.
During the 2021-2030 phase Russia’s existing SSN/SSK fleet is planned to be improved by adding unmanned technologies, while construction of a new-generation SSN class is also planned.

For the Russian Naval Aviation the focus in the first phase will be the development and serial production of an advanced maritime patrol aircraft (MPA) by 2020.

Russia will develop a completely new anti-submarine warfare (ASW) aircraft to replace the Il-38 ‘May’ and other ASW aircraft in its inventory, according to naval aviation chief Major General Igor Kozhin, “The aircraft is currently being selected and will be introduced by 2020.”
Russia currently operates 28 Il-38 maritime patrol aircraft (MPA) alongside 20 long-range Tu-142 ‘Bear F’ ASW aircraft (an MPA variant of the Tu-95).

Additionally, Russia will look to develop and produce a new shore/ship-based multirole helicopter (to replace the Ka-27) and acquire a ship-based combat helicopter (the Ka-52K). Russia will also seek to develop advanced airborne strike systems.
The second phase will see the deployment of the new Russian ship-based radar surveillance aircraft, ship-based UAVs, and ship-based strike aircraft. The 2021-2030 period will see the Russian Naval Aviation transition to optionally piloted aircraft, including those derived from existing manned aircraft.
During the 2031-2050 phase naval aviation focus will switch to a new generation of multirole aircraft and UAVs and field a new generation of airborne precision weapon systems.

The first phase of the doctrine concerning Russia’s coastal troops and marine force aims to achieve: the completion of development of advance coastal-defence missiles and the issuing of them; and the enhancement of the marine brigade’s ability to operate in different climates, including extreme Arctic conditions.

Between 2021 and 2030 the doctrine plans the introduction of a highly mobile amphibious combat vehicle for the coastal troops so that they can support the marines’ operations. The marines are also earmarked to begin receiving unmanned platforms during this period, possibly armed with directed-energy weapons or powered by alternative energy sources.

Russian fleet is on the edge of a precipitous decline in ship numbers and combat power, owing to huge industrial shortfalls that have been decades in the making. Moscow-based defense expert Ruslan Pukhov has called Russia’s shipbuilding industry a black hole that eats up huge amounts of state spending.

The new doctrine mentioned for the first time independent shipbuilding, stressing the need for a long-term technological independence in the fields of shipbuilding and naval equipment in accordance with the state armament program.

The plans, which also include ambitious ship-building targets and expansion of infrastructure for the country’s fleet in the Black Sea, were laid out in a new naval doctrine approved by Vladimir Putin on Sunday.

Russia will now look to create a single, integrated, and jam-proof fleet-wide C2 system for use at all levels from the strategic to the tactical. This is intended to be adaptable and to form a single information control complex to enable network-centric command of diverse naval and joint-service assets in any theatre of operations.

As a conclusion, the document states that Russia intends to “firmly and strongly” strengthen its positions in the world ocean.

But the new Maritime Doctrine does not tell us how the Russian navy would be deployed, how it would fight, or where it would be active in the event of a real conflict, says Stephen Blank in Eurasia Daily Monitor Volume 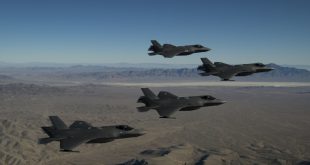 A close-in weapon system (CIWS),  is a point-defense weapon for detecting and destroying short-range incoming …