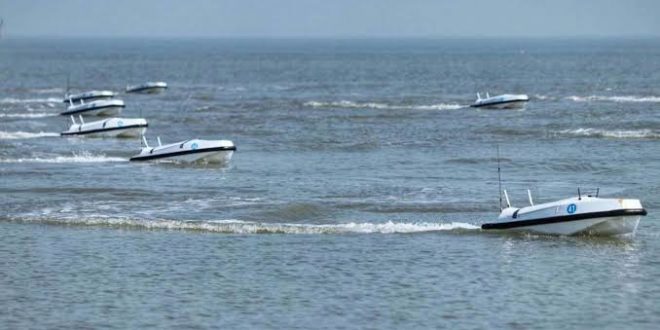 Militaries are becoming increasingly reliant on unmanned ground, sea and aerial vehicles to carry out dull, dirty and dangerous missions. Unmanned Surface Vehicles (USV ) is a vehicle that operates at or near the sea surface and  has no vehicle operators on board. The US is investing in the development and research of unmanned vessels as part of its push to a 355 ship navy by 2030. USVs enable ships to be at sea for longer while also being cheaper as they do not need to house crew. Under the agreed National Defence Authorisation Act for 2020, the US Navy will receive funding for the production of number of USVs including one large unmanned surface vessel (LUSV) and two medium unmanned surface vessels (MUSV).

USVs have greater potential payload capacity and endurance than comparably sized unmanned systems in other domains. They are able to use higher-density energy sources than UUVs (hydrocarbons instead of batteries), and, unlike UAVs, they do not need to burn fuel merely to maintain their vertical position; if desired, they can move relatively slowly for days or weeks without refueling.

The U.S. Navy is pursuing a new Distributed Maritime Operations (DMO) concept that will help redefine how the Navy fights and operates. This major operating concept will soon play a significant role in how the Navy organizes its future force development. Implementing distributed operations will require more ships spread across wider distances. This, in turn, will lead to a changing fleet composition with larger numbers of small ships and vessels of all types, as well as provide the additional required logistical support over expanded distances. Far greater participation of unmanned surface vehicles (USVs) of all types will be needed as a part of this new construct due to budgetary necessity and operational imperative.

DARPA launched  “Sea Train” programme in 2020 or Improved Navy Lighterage System (INLS) is comprised of powered and unpowered platforms that can be assembled from different modules to complete a variety of missions under the direction of the US Navy and the Defence Advanced Research Projects Agency.  The Sea Train program seeks to enable extended transoceanic transit and long-range naval operations by exploiting the efficiencies of a system of connected vessels (Sea Train). The Sea Train program will demonstrate long-range deployment capabilities for a distributed fleet of tactical unmanned surface vessels. DARPA envisions sea trains formed by physically connecting vessels with various degrees of freedom between the vessels, or vessels sailing in collaborative formations at various distances between the vessels. 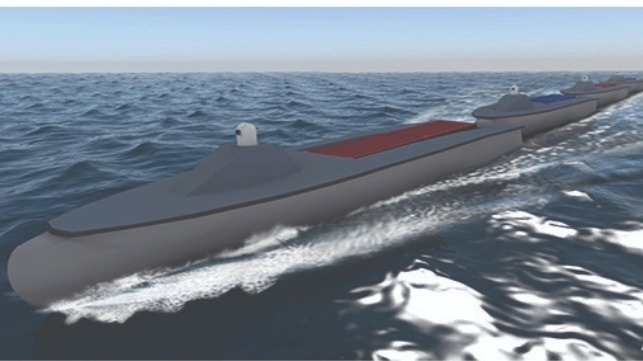 Through the program, DARPA envisions the development of a four-vessel-or-more system that can persist through arduous transits of about 7,480 miles, then disaggregate and conduct their own tasks, or “independent yet collaborative operations consisting of transits, loiters, and sprints in varied sea state conditions,” for about 1,150 miles. The vessel will then reassemble for transit as the connected Sea Train for another nearly 7,500-mile journey—all without human intervention.

The agency is open to any technical approaches that proposers wish to offer but highlighted three that could potentially achieve the overall concept. Officials recommend fleets of connected or connectorless Sea Trains that essentially create a mid-body for the vessel to decrease wave-making resistance while also allowing for the vessels to separate and conduct tactical missions independently.

DARPA aims to develop and demonstrate approaches to overcome the range limitations inherent to medium unmanned surface vessels by exploiting wave-making resistance reductions. Wave-making resistance is a form of drag that affects surface watercraft, such as boats and ships, and reflects the energy required to push the water out of the way of the hull. This energy goes into creating the wave. The agency also suggests “formation sea trains,” or a fleet made up of four or more vessels that travel closely and exploit wave interference between one another while in transit.

And that’s a way to get at the wave-making resistance that’s created by a vessel,” Andrew Nuss, DARPA’s Sea Trains program manager, told USNI News in a recent interview “So by physically connecting four of these vessels together for the really long-range transits, you effectively have the resistance of that four-vessel system, [which] is about the same as a single vessel operating out there because that sort of first vessel is kind of the linebacker, I would say, of the wave making resistance,” he continued. “The second, third and fourth vessel on that train don’t see as much wave-making resistance as they would operating independently. So it’s kind of a unique approach to solve the problem. We’re trying to cheat physics a little bit here in reducing wave-making resistance.”

“DARPA is very interested in nontraditional approaches that reduce risk early in the program. Early, aggressive, and insightful modeling, analysis, and testing is encouraged and desired,” officials wrote in the BAA. “Potential early failures that burn down risk and lead toward a more capable product are encouraged.”

The program is anticipated to envelop two phases and last for 36 months. The first phase will encompass conceptual design, analysis, simulation and scaled model testing, and the second will include updates and additional testing. DARPA said funding will depend on the quality of proposals received, and the availability of capital at hand.

Participants will also have to address two technical areas over the course of the program. For the first area, researchers will need to develop a conceptual design of an integrated system comprised of the vessels’ hull form, connectors, propulsion and gap mitigation techniques. For the second technical area, participants will be expected to create a dynamic “open-standard, autonomous” control architecture that can monitor environmental conditions the vessels endure in the middle of the ocean, their alignment and spacing and “control solutions to maximize Sea Train efficiency and seaway survivability.”

The Defense Advanced Research Projects Agency has awarded contracts for its Sea Train program, which seeks to enable autonomous vessels to perform long-range transit operations. In September 2020, Applied Physical Sciences Corp., Gibbs & Cox Maritime Solutions and Mar Technologies were chosen for the program, which will include two 18-month phases.

The contract awards’ total potential values were $31.2 million, $30.4 million and $28.5 million, respectively. Through the effort, DARPA wants “to provide some operational flexibility for medium-sized unmanned surface vessels,” said Andrew Nuss, a program manager within the agency’s tactical technology office. Each company is “developing a unique approach to be able to address the goals of the Sea Train program.”

“It’s sort of a vicious cycle at that point, where you’re constantly chasing efficiencies and whatnot,” he said. However, a Sea Train platform — which is expected to be 40 meters long and carry a 35-ton payload — could give an operational commander “the flexibility to deploy these highly capable medium-sized unmanned surface vessels from many different locations without having to rely on … refueling operations.” DARPA plans to extend the range of USVs more efficiently by creating a “train” in which four autonomous vessels are physically connected until they reach their destination.

The platforms would then detach, conduct their individual operations and then reconnect before returning to their starting point, Nuss said. Unmanned boats must overcome resistance and friction from waves as they move, but attaching the platforms may help increase their efficiency and allow them to travel longer distances, he said. “By physically connecting multiple vessels together, and extending the length of that interconnected system, we could move — in our case — four vessels with … approximately the same efficiency of a single vessel,” Nuss said. The medium-sized platforms were picked for proof of concept, but the idea could be applied to smaller vessels or manned systems as well, he noted. 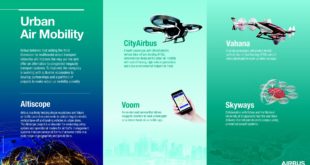 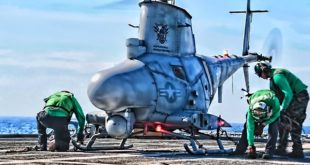