High frequency (HF) band covering frequency range between 2 to 30 MHz provides over-the-horizon communications with ranges over thousands of kilometers through skywave propagation. It offers an alternative to satellite communications (SATCOM) for many commercial and military applications that requires non-line-of-sight communications.

High Frequency (HF) band  has been considered as principal way for long-range communication (wireless), using a simple inexpensive equipment, for both internationally and with in a country which are isolated areas now due to disaster. Despite the renewed interest on HF communications, there are a lot of challenges involved, like the operation with very low signal-to-noise ratios (SNR) and signal variation due to the frequent changes in the Ionosphere constitution.

HF’s single greatest value is its ability to provide reliable short and longrange Beyond Line Of Sight (BLOS) communications. Even in EMS-denied environments, HF radios can provide stable, beyond-line-of-sight communication permitting the ability to initiate a prompt global strike. While HF radio equipment is also vulnerable to electronic attack, it can be difficult to target due to near vertical incident skywave signal propagation. This propagation method provides the ability to reflect signals off the ionosphere in an EMS-contested environment, establishing communications beyond the line of sight. Due to the signal path, the ability to target an HF transmitter is much more difficult than transmissions from VHF and UHF radios that transmit line of sight ground waves.

Although HF radio technology is generally considered quite mature, recent new advancements in RF/MW (radio-frequency/microwave) technology has resulted in renewed interest and new opportunities for HF communication. Advancements in HF technologies over the past two decades, especially automatic link establishment (ALE) and wideband HF (WBHF), improve the ease of use and capacity of HF communications. Today, modernized Wideband HF (WBHF) can deliver rates up to 240 kpbs on a 48 kHz wide channel. In order to deal with the variability of the HF channel, several technologies have emerged like the Data Rate Change (DRC) algorithms.

HF skywave propagation through ionosphere diffraction is a challenging communication channel that exhibits both low and short terms temporal fluctuations. It is also easily susceptible to unintentional interference because of spectral congestion, and intentional and adversarial jamming. To avoid interference, a frequency agile approach can be used to search for usable frequencies.

However, this would not be effective if the HF communication link is under broadband barrage jamming attack. Alternatively, recent advances in RF front-end and software defined radio technologies have suggested that HF radios can be intrinsically hardened so that they can withstanding and survive interference and jamming attacks without causing service interruption and even suffering electrical damages to the circuitries.

PHASE I: During the Phase I effort, a prototype HF radio receiver architecture incorporating interference and jamming hardening techniques will be investigated. Different hardening techniques should be investigated and analyzed to achieve optimum performance. A system level block model should be developed and analyzed. Performance metrics such as maximum power handling, lowest receivable signal-to-noise ratio, etc., should be defined and calculated for the selected system, and compared with existing HF radio receivers. Detailed circuit implementation of the system level block model should be designed and its performance analyzed.

PHASE II: The prototype HF radio receiver designed in Phase I will be built, assembled, and tested. Performance metrics established in Phase I should be measured and compared with simulation results. Comparative field demonstration together with an existing HF radio should be performed to demonstrate enhancement in interference and jamming resistance. Additional interference and jamming hardening techniques should be investigated and existing circuit designs improved. 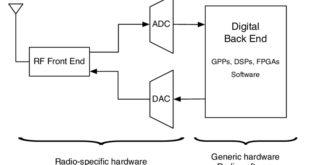