Long range ballistic missiles, stealth aircraft, Unmanned Combat Air Vehicles and cruise missiles make up just part of the new and proliferating threat from the sky. Defence against this complex threat calls for networked surveillance and control systems as well as a layered architecture of short, medium and long range anti-air missiles.

Scheduled to enter service in 2020, Sky Sabre promises to bring a step change in air defence for the British Army, extending its capability from short to medium range, and bringing unprecedented speed, precision and reliability.

The CAMM (Common Anti-Air Modular Missile) series is a family of surface-to-air and air-to-air missiles developed by MBDA for the United Kingdom. The CAMM launcher unit is based on a MAN SV HX60 8×8 truck, mounting a crane for self-reloading, and 12 launch tubes for CAMM missiles mounted at the rear of the chassis. In road condition, the missiles are lowered to the rear part of the truck chassis. In firing position, two groups of six all-weather canister missile launchers are erected to the rear of the crew cabin.

In August 2015, Saab has secured a contract to supply additional Giraffe agile multi-beam (AMB) radar systems and associated equipment to the UK Ministry of Defense (MoD). The Giraffe is a family of land and naval two or three-dimensional G / H-band passive electronically scanned array radars, and can classify and track fixed wing, helicopter, surface, jammer, and ballistic targets, while providing coastal surveillance.

The Giraffe radar is designed to provide a full 360° update of the air situation out to 120km every second, and is able to function in challenging environments, such as mountains, complex coastal regions and wind farm areas.

The requirement was to deliver a Ground Based Air Defence (GBAD) capability along with an initial support solution for up to 5 years. This will include delivery of Battle Management Command, Control, Communications, Computers and Intelligence (BMC4I) functionality, integrated with networked Land-Ceptor Launchers into a primary Fire Control Centre (FCC) which will centrally Command and Control missile engagements within the context of a wider Air Defence Command and Control (C2) Battle Management (ADBM) environment.  An alternate FCC with medium mobility and capable of operating independently, will also be required in the event that the primary FCC/Control and Reporting Centre (CRC) are disabled.

Richard Smart, Director Weapons at Defence Equipment and Support, said: “The DE&S Weapons project team has working closely with Dstl colleagues to develop Sea Ceptor and Land Ceptor; vital air defence systems which will protect our Armed Forces personnel on operations against current and future threats. Together with industry we will continue to support the front-line commands as this world-beating equipment enters service in defense of our national security and interests.”

MBDA have laid out a roadmap for future air-launched CAMM as a possible future replacement for ASRAAM. As a possible replacement for Italian Armed Forces SPADA and ASPIDE, MBDA has also proposed an extended range version of CAMM, reportedly with a range in excess of 45km. The CAMM-ER missile will be integrated within the Enhanced Modular Air Defence Solutions (EMADS) system.

CAMM, the Common Anti-air Modular Missile, is the next generation air defence missile designed for land, sea and air environments

The Common Anti-air Modular Missile (CAMM) program is designed to provide the next generation of anti-air guided weapons for land, sea and airborne operations being fully compatible with existing command and control (C2) and sensors (radars etc) facilities.

The CAMM missile has a minimum operational range of less than 1 km and a maximum range greater than 25 km. It has a weight of 99 kilograms, a length of 3.2 meters, a diameter of 166 millimeters and reaches a supersonic speed of Mach 3 (or 1,020 meters per second). In flight, the missile can receive mid-course guidance via a data link before the active homing radar seeker takes over for the final approach to target.

The new missile family is designed to engage high-speed jets, helicopters, supersonic cruise missiles and sea-skimming antiship missiles. These missiles will use low-cost components and re-use software in order to achieve a significant reduction in customer costs.  The 20-year project resulted in a multi-million-pound contract awarded to MBDA to build the next-generation Common Anti-air Modular Missile (CAMM).

The benefits of using a common solution for multiple platforms and services include:

Incorporating advanced technologies to provide complete protection against all known and projected air targets. CAMM is currently in full scale production for the UK MOD to deliver the Sea Ceptor ship based air defence system that will equip the Royal Navy Type 23 and future Type 26 frigates. The same CAMM missile will form the core of the land based air defence capability for the British Royal Artillery.

Sea Ceptor and Land Ceptor use innovative seeker and datalink technology to achieve a high degree of accuracy. The associated radar systems track the threat and the datalink is then used to update the missile with the location of the threat. The CAMM’s own active radar seeker can then take over the missile guidance. The missiles are designed to provide 360-degree coverage with a high degree of maneuverability.

By employing innovative technologies to enable a common solution across land and maritime domains, CAMM/Ceptor delivers approximately GBP1 billion worth of through-life savings within the complex weapons pipeline. Further savings are expected through export, for which two customers have already been confirmed.

In May, the Royal Navy completed its acceptance firing trials, resulting in an initial operating capability for HMS Argyll, with the Army land system also recently completing a successful firing from a pre-production launch vehicle. Sea Ceptor will provide local-area air defense to the Type 23 and Type 26 frigates, replacing Sea Wolf; Land Ceptor will replace the Rapier missile to deliver a state-of-the-art ground-based air defense capability.

A representative from Dstl’s Air Defense Weapons team, said: “Since its conception, Dstl and its predecessors have been involved throughout the development and procurement of both the Sea and Land Ceptor. Initial studies were conducted to define future capability needs, followed by a series of technology demonstrator projects, with Dstl providing technical direction to help ensure the end product was exploitable into the Ceptor projects.”

Each supersonic IM compliant CAMM weighs 100kg, approximately 20kg heavier than Sea Wolf and nearly double the weight of Rapier. Length is 3.2m and diameter, 0.16m. The missile itself takes a great deal from ASRAAM but it is not a surface launched ASRAAM with a new name. Common components include the very low signature rocket motor from Roxel, the warhead and proximity fuse from Thales

The RF seeker and open architecture electronics backbone are new, the latter is called Programmable Open Technology for Upgradable Systems or PrOTeUS and uses an IEEE 1394 Firewire bus technology as a starting point.

The soft vertical launch system that ejects the missile to a height of about 30m before a small a thruster fires to orientate the missile with the target location. This method is safer, removes the need to manage hot gas efflux in the launch silo and ensures all of the main rocket motor fuel is used for arriving at the target.  Although range will, of course, be classified MBDA declare it as ‘in excess of 25km’

The Common Data Link (CDL) is the small ‘black box’ that sits on top of the mast, especially clear in pictures of FLAADS(L) although it doesn’t necessarily have to use the two-way data link to the launch vehicle, so, it could take mid-course corrections from any number of suitably equipped land or air platforms and then switch to active homing when it gets close enough. The original launch platform could have even moved by the time the missile hits.

The CAMM munition will replace the current in-service weapon in 2017 as the Royal Navy’s latest ship based air defence system. Known as Sea Ceptor it will be fitted to the Royal Navy’s Type 23 Frigates and will deliver significantly greater capability at a reduced cost in all operating environments than alternative systems. Sea Ceptor can operate from the SYLVER and Mk41 launchers using a quad-pack configuration to maximise packing density and for optimum installation on smaller ships.

The Soft Vertical Launch technology reduces system weight and provides flexible installation. The weapon’s Command and Control system is designed to be integrated into new or existing naval combat systems. A dedicated tracking radar is not required with Sea Ceptor as the weapon is able to use data provided by the ship’s surveillance radar, saving significant acquisition and support costs. One of the key benefits of the missile having an active RF seeker is that it removes the need for a fire control radar, of critical importance against saturation attacks.

It also has the added benefit of reducing complexity, cost and weight. It is this feature that is one of Sea Ceptor’s most attractive features in the export market.

The CAMM munition offers land based forces a highly effective and easily deployable, local area air defence system, as part of the Enhanced Modular Air Defence Solutions (EMADS), capable of operating as either a stand-alone unit or integrated within a battle space network. The use of third party target information from the wider battle space network allows the system to engage targets that are non line-of-sight from the local launcher or sensors. The light weight and compact designs allow multiple missiles to be carried by conventional wheeled vehicles.

The soft launch technology provides a true 360° air defence capability and a weapon system that can be easily concealed and quickly deployed without the need for dedicated search radars.

An interesting feature of the CAMM system in a land environment (Land Ceptor) is that it does not require the radar system to be co-located, opening possibilities for concealing the launch point and attacking non-line of sight targets. Linking the missile system into the Royal Artillery’s evolving Land Environment Air Picture (LEAAP) system which uses the Falcon trunk network, Saab Giraffe radars and Link 11/16 makes it a very hard target to locate and either suppress or destroy. 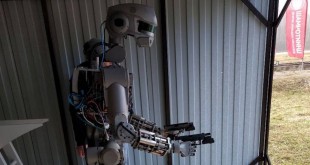 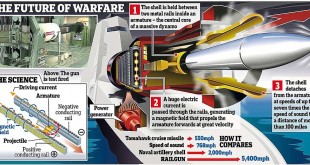 Railgun being deployed on Warships to Trucks to shoot down stealth aircraft , hypersonic missiles to satellites 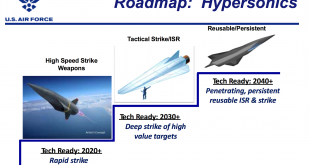