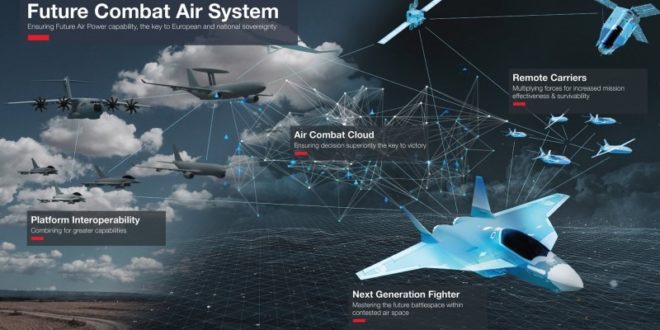 Manned-unmanned Teaming (MUT) is the operation of manned and unmanned assets in concert towards a shared mission objective.  It has significant applications in the civilian world, particularly in firefighting, search and rescue operations, hazmat incidents, and law enforcement.

Recent progress in the development of Advanced Air Mobility (AAM) / Urban Air Mobility (UAM) vehicles and infrastructures will only expand the use of MUM-T, with the emphasis it places on the use of autonomous systems, unmanned aerial vehicles (UAVs), remotely piloted aircraft, and vertical lift aircraft.

It is becoming one of key innovations that will pave the way to future airpower. Smart, connected and modular UAS connected by a distributed network of intelligence will act as force multipliers for the manned aircraft, enhancing the team’s capabilities and keeping the pilot out of harm’s way, while still in control.

In addition, while military environments have more urgency and pose more communication issues to overcome, the precision, speed, and tireless productivity inherent in MUM-T systems will make it hard not to adopt for commercial use.

MUM-T will become a future pillar of (Future Combat Air Systems) FCAS. An increase in future air combat complexity has paved the way for unmanned systems to be deployed alongside fighter jets – synergising to become Manned-Unmanned Teams. Remote Carriers are purpose built, modular UAS that will fly alongside combat manned jets.

Remote Carries will be able to act as remote sensors, carrying a wide range of payloads suitable for ISTAR missions. Other versions will be able to directly engage threats – both kinetically and non-kinetically (e.g. through Electronic Attack). The Remote Carriers will be modular, meaning the specific payload can be chosen in accordance to the planned mission and required capabilities, effectively rendering them multi-mission air combat assets.

Through the co-operation of piloted assets, such as mission aircraft and helicopters and pilotless assets, MUM-T benefits wider missions covering search and rescue, maritime surveillance and border protection. Improving manned platforms coverage of areas with BLOS adding to the efficiency and effectiveness of missions.

The U.S. defense sector is highly involved in the development and deployment of MUM-T for its potential to increase capacity and responsiveness, broaden capabilities, and reduce risk to military personnel as it supports mission success. MUM-T is seen as a powerful option for the U.S. Armed Forces and has been used operationally.

The US Air Force (USAF) wants its new Northrop Grumman B-21 Raider long-range strike bomber to operate with up to five unmanned aerial vehicles (UAVs) in a manned-unmanned teaming (MUM-T) concept.

Frank Kendall, service secretary, said on 9 December that these UAVs would operate with, but not necessarily accompany, the B-21 as the operational tactics are to be determined. However, Kendall said the service wants to network the B-21 together with UAVs under the control of a pilot operator to be used in a formation against an enemy.

Aircraft in the teaming role will have to be fast enough to keep up with fifth- and sixth-generation fighters, have the advanced sensors and communication systems to fuse targetable data from multiple sources and be capable of carrying extra weapons.

Artificial intelligence will likely play a role, sorting data and analyzing threats to reduce the pilot’s workload. The sensors, avionics and weapons systems  will be  increasingly AI-reliant, which makes it easier to greatly improve performance by integrating new algorithms, analytics or processing speed.  For instance, “smart sensors” able to gather, analyze and organize vast volumes of combat information in milliseconds, and massively quickening the human decision cycle.

They will be  operating with ever-increasing levels of autonomy. Algorithms can integrate new information, instantly compare it against vast amounts of stored data, and come to informed conclusions without requiring human intervention.

Multi-platform autonomy is a game-changing force multiplier for military troops and their civilian counterparts in the MUM-T scenario, requiring more autonomy-enabled teams of manned systems (such as ground vehicles) working and integrating practices with unmanned ones, like UAVs or satellites.

Synergies this powerful have not evolved before because they are technologically complex, and they can span across multiple heterogeneous platforms and domains. However, the combination of advances in autonomous technologies with a new willingness for those who use it – technologists, engineers, and military personnel – to integrate their ways of thinking and their various knowledge resources are allowing a way forward, realizing broader MUM-T implementation.

China has already made great strides in the development of competing drone technologies and low-tech solutions that favor quantity over quality. Both Russia and China have embraced manned-unmanned teaming as part of their strategic plan

Under the Skyborg program, Boeing’s MQ-25 and ATS, Kratos’s Valkyrie XQ-58A and UTAP-22 Mako, General Atomics’ MQ-20 Avenger, and the two new drones that were recently announced are all being developed as autonomous drones for the teaming role.

As the world’s population is growing and time lost to traffic snarls is increasing, the …