Aviation electronic standards including ARINC, DO 254, DO160 and MIL-STD-704 make flying more reliable, predictable, and safer.

The growing demand for high-efficiency fighter aircraft, commercial airbuses and the ever-evolving Aerospace and Defense requirements are driving the demand for next-gen airborne electronics systems. Air transportation agencies and aviation OEMs across the globe have been striving to build next-generation Airborne electronics systems to make flying more reliable, predictable, and safer.

Airborne electronics such as communication systems, transmit-receivers, guidance & navigation systems, flight control computers, and fire-control systems among others are some of the critical components of an aircraft. The design of Airborne electronics systems and sub-systems demands higher safety and reliability to ensure airworthiness of these sub-systems. All major avionics OEMs, R&D and System Engineering companies designing airborne electronics hardware and software have to ensure compliance with several regulatory standards like DO-254, DO-178B/C, ARINC, MIL-STDs, and DO-160 to develop high performance, reliable products.

DO-254 is a stringent functional safety standard that defines and regulate the process of auditing and certification of Airborne electronics systems. DO-254 is published by Radio Technical Commission for Aeronautics (RTCA) in 2005 and administered by the FAA to ensure safety in electronic-airborne systems. The standard insists on tracking the developmental activities and documenting every step and each stage involved. The standard helps minimize errors in the process of a design and brings traceability to a great extent.

DO-254 covers the guidance for airborne electronics hardware such as,

DO-254 defines five levels of compliance, based on the impact of hardware failure on the aircraft or its functions. Level A, being the most stringent (termed as catastrophic), and Level E with least impact (termed as No safety) on passengers/crew. This implies, meeting Level A compliance for airborne electronics systems requires a very complex process of verification and validation than Level E compliance. 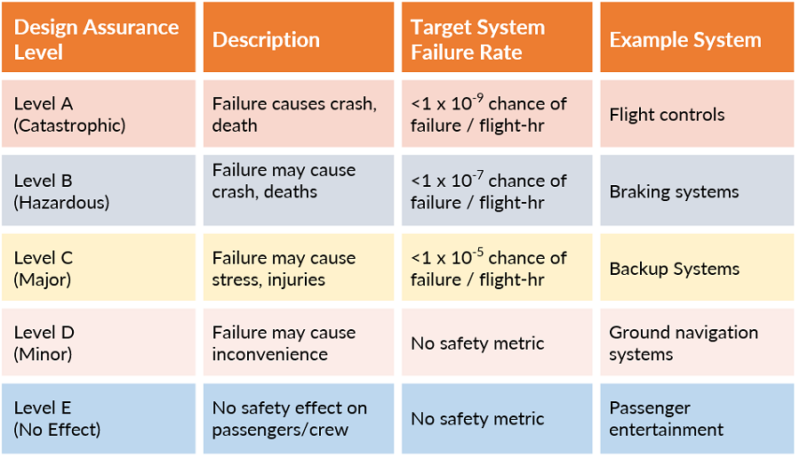 Vital airborne electronics systems must be designed to withstand diverse environmental conditions it may subject to during the flight. To standardize the design, production and testing of these complex, classified aircraft electronics, in 1980, RTCA published DO-160 – Environmental Conditions and Test Procedures for Airborne Equipment.

The standard covers testing of a wide range of critical factors such as temperature, humidity, electrical interference, shock resistance, flammability, magnetic effect, waterproofness, radio frequency susceptibility, lightning direct effects and operational shocks among others, that can impact the performance of an airborne electrical or electronic device. By subjecting airborne electronics to DO-160G certification and testing process, the equipment confirms to deliver reliability, accuracy and robustness in any flight condition.

Aircraft cockpit displays are becoming increasingly complex over the past two decades due to the stringent certification requirements defined by DO-178B/C. ARINC 661 is a set of specifications that encourage a standard, flexible architecture for the avionics cockpit systems. ARINC 661 outlines the specifics for Cockpit Display Systems (CDS) and the communication between CDS and User Applications (UA), which control and monitor airborne electronics and subsystems. The standard was first published in 2001 and over years it has evolved adding several supplements such as widgets for vertical maps, Multitouch management, Animated graphics, 3D maps, improvements in user interface, etc.

ARINC 661 also outlines GUI definition for CDS. The standard brings out a clear separation between graphics codes, logic codes and the layout of all visual elements. ARINC 661 brings out a standard communication protocol for the CDS and UA to exchange messages.
Modern cockpit designs are increasingly adopting the ARINC 661 Standard. The standard is used right from requirements specification, design, and development through deployment and maintenance of airborne display systems. The objective of the standard is to efficiently manage the increasing complexity of Cockpit Display Systems. The standard aids easy integration of new avionic systems, display functionalities and Cockpit HMI upgrades into aircraft in business – all while minimizing the cost implications.

MIL-STD-704 deals with the electric power characteristics of an aircraft and defines a standardized power interface to ensure compatibility between the aircraft power system and airborne electronics. The standard addresses various power characteristics such as voltage, frequency, phase, power factor, ripple, maximum current, electrical noise and abnormal conditions for both AC and DC systems in an aircraft. Published in 1959, MIL-STD-704 supersedes the engineering document MIL-E-7894 describing aircraft electrical power.

The synthetic biology, the design and construction of biological devices and systems, promises  to augment …