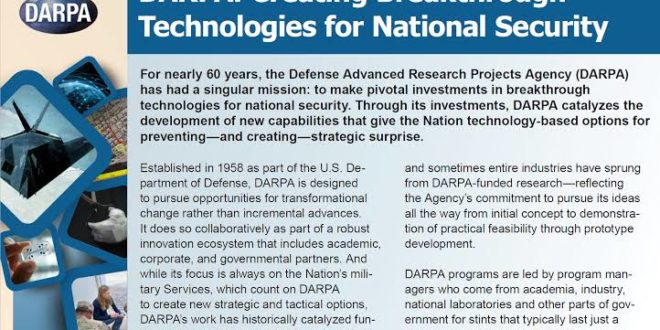 The Defense Advanced Research Projects Agency (DARPA) is an independent agency of the U.S. Department of Defense, with a mission to prevent technological surprise to the US, and also to create technological surprise for its enemies. DARPA operates through Program managers that are hired for 3-4 years to find, fund and foster new innovation ideas based on technology visions that each of them is expected to develop. PMs fund multiple teams at universities, companies, and government labs who take ownership of these visions.

a. On 16th Aug 2016 China launched the world’s first quantum communications satellite officially known as Quantum Experiments at Space Scale, or QUESS, satellite. A functional satellite-based quantum communication system would give the Chinese military the ability to operate on the battlefield without fear of message interception, a threat to our security.

b. Russia’s Avangard hypersonic missile system became operational in Dec 2019. The intercontinental weapon can fly 27 times the speed of sound and, unlike a regular missile warhead, can make sharp manoeuvres en route to a target, making it much harder to intercept again a threat to our security.

c. China has taken global lead in ongoing moon race to exploit its resources. A Chinese spacecraft has become the first to land on the far side of the moon in a historic moment for human space exploration. Another first, the relay satellite, named Queqiao, was launched on May 21, 2018, and became the first communication satellite operating in the halo orbit around the second Lagrangian (L2) point of the earth-moon system, nearly 500,000 km from the earth. Chinese advances are future threat to our economic and national security.

d. On April 2020,  Russia conducted a test of its direct-ascent anti-satellite (DA-ASAT) missile system, which is designed to destroy satellites in low Earth orbit. This test followed the country’s on-orbit test maneuvers of two satellites that “exhibited characteristics of a space weapon,” COSMOS 2542 and COSMOS 2543, which the U.S. has been closely following, the U.S. Space Force said in a statement. In February, the U.S. Space Force spotted these Russian satellites following a U.S. spy satellite, behavior that Space Force commander Gen. John “Jay” Raymond described at the time as “unusual and disturbing.”

China leading US in many technologies and gap narrowing in others

Michael Brown, director of the Pentagon’s Defense Innovation Unit, said the United States is in a “superpower marathon with China” to acquire advanced technology. There are already areas where Beijing is ahead, he said. These include facial recognition software, small drones, quantum communications, telecommunications, genetic data, cryptocurrency and more, according to his presentation slides

Areas where China is challenging the United States’ lead include artificial intelligence, biotechnology, pharmaceuticals, rocket launches, quantum computing, quantum sensing and supercomputing, according to his slides.

Eric Schmidt, former executive chairman and CEO of Google and the chairman of the National Security Commission on Artificial Intelligence, said the Asian power is rapidly catching up to the United States. “We’re a year or two ahead of China,” he said. “We’re not a decade ahead.” The general consensus is that leading AI research is still conducted in the United States, but its strategic competitor is advancing, he said during an event hosted by the Hoover Institution. “We’re in a contest, and part of the reasons I think that China may win is that they have five times as many people,” Schmidt said. “They’re very focused on STEM education.

Russia’s Avangard hypersonic missile system has become operational.  Defence Minister Sergei Shoigu confirmed the “Avangard hypersonic glide vehicle entered service at 10:00 Moscow time on 27 December”, calling it a “landmark event”. The intercontinental weapon can fly 27 times the speed of sound and, unlike a regular missile warhead, can make sharp maneuvers en route to a target, making it much harder to intercept.

The weapon system was first publicly discussed by Putin in his state-of-the-nation address in March 2018. He added that it is designed with new composite materials, and can, therefore, withstand Avangard temperatures of up to 2,000 Celsius (3,632 Fahrenheit) resulting from a flight through the atmosphere at hypersonic speeds. He emphasized earlier this week that Russia is the only country armed with hypersonic weapons and that it is leading the world in an entire new class of weapons.

This means Russia has taken lead  in  Hypersonic Weapons Race  that shall revolutionize warfare by providing prompt global strike capability and defeat all missile defences. Brad Leland, Lockheed’s program manager for Hypersonics made the case for the jet on the company’s website, stating: “Hypersonic aircraft, coupled with hypersonic missiles, could penetrate denied airspace and strike at nearly any location across a continent in less than an hour… Speed is the next aviation advancement to counter emerging threats in the next several decades. The technology would be a game-changer in theater, similar to how stealth is changing the battlespace today.” Once operational, these missiles would make current strategic missile defenses systems obsolete, they will be able to avoid triggering early-warning systems or detection by radar as well their speed shall complicate interception.

Even china is ahead of US in hypersonic race. Admiral Harry Harris, the former head of U.S. Pacific Command, told the House Armed Services Committee in February  that hypersonic weapons were one of a range of advanced technologies where China was beginning to outpace the U.S. military, challenging its dominance in the Asia-Pacific region.

Putin described the Avangard’s creation as a technological breakthrough comparable to the 1957 Soviet launch of the first satellite. The sputnik event led to genesis of DARPA and a commitment by the United States that in the future we would be the initiator and not the victim of strategic technological surprises. DARPA’s mission is to create strategic surprise, and the agency primarily does so by pursuing radically innovative and even seemingly impossible technologies. Therefore, occurrence of another sputnik like event can be considered as failure of DARPA in it’s mission.

There can be many reasons of DARPA’s failure which agency will introspect on its own, however some of the reasons that look plausible are