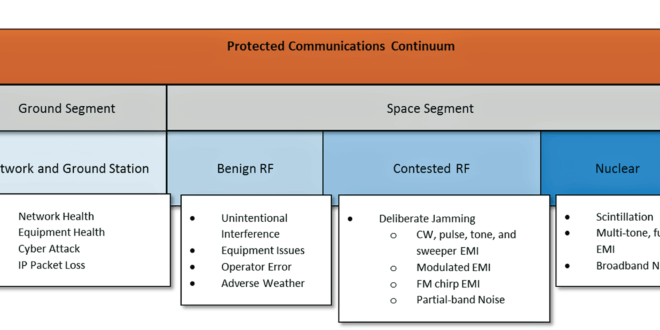 Military has become highly dependent on satellites for high data rate beyond line of sight communications as well as network centric operations. Satellite communications are also required to support military operations that are becoming more complex as conflict areas grow more dispersed on a global scale.

The ever increasing pace of  launching of satellites by countries led by US and China has made space domain  more congested, with the potential for intentional and unintentional threats to space system assets also increasing. Space is also becoming another domain of conflict due to enhanced militarization and weaponization of space.  Potential adversaries have the ability to focus on temporary, reversible effects such as jamming or dazzling which denies or disrupts the satellite versus permanent and non-reversible damage to systems, typically caused by destroying or degrading satellite capabilities.

Attacks can be non-kinetic such as high-power microwave and lasers or cyber-attacks. Attacks can also be kinetic such as direct assent or co-orbital ASAT weapons, attacking ground stations or communication lines, or attacking critical satellite systems such as power supplies and/or solar arrays

Despite advances in satellite technology, many of the U.S. military’s most expensive and necessary assets remain vulnerable to jamming from inexpensive tools, according to a new report from the CSIS Aerospace Security Project.

“The technology needed to jam many types of satellite signals is commercially available and relatively inexpensive,” the report reads. Other electronic threats such as spoofing, which attempts to trick receivers into believing manipulated data from an attacker is real, also offer low cost options to adversaries who hope to interfere with satellite connectivity. These kinds of attacks can disrupt communications or position, navigation and timing techniques.

The report, released April 12 and titled “Space Threat Assessment 2018,” notes that while United States near-peer adversaries have made strides in more advanced kinetic weapons, such as direct ascent anti-satellite weapons, jamming technology also is seen as critical. For example, “China has made the development and deployment of satellite jamming systems a high priority,” according to the authors, Todd Harrison, Kaitlyn Johnson and Thomas Roberts.

Another near-peer, Russia, has displayed jamming and spoofing capabilities in the ongoing conflicts in Ukraine and Syria in the last several years. The report said the use of Russian technology in these conflicts “demonstrate[s] that Russia retains advanced electronic attack capabilities, despite some analysts’ claims that Russia’s ability to jam and spoof satellites has declined since 1991.”

But the threat from jamming and spoofing attacks goes beyond near-peers. Iran and North Korea, so-called rogue states, also have demonstrated the capability and willingness to interfere with satellite communications and GPS signals, according to the report.

Militaries are developing many strategies and technologies for assured communications under jamming environment such as developing Robust Waveforms and Networks, Making links stronger against threats through improved signal processing,  improved modulation, multi-user detection, etc. Another strategy is adaptation in frequency, data rate, polarization, routing/interfaces, to avoid jamming. Overall robust network architecture including sensing and adaptation to physical and network attacks

DARPA’s Communications Under Extreme RF Spectrum Conditions (CommEx) program developed  signal detection and reasoning technology that allows radios to recognize interference and jamming, and adapt to maintain communications — even in the presence of severe and/or adaptive jamming and interference sources. CommEx is a fundamentally new approach to anti-jam, interference-resilient communications.

In the face of a rising near-peer threat to electronic communications, the Air Force is pressing forward with efforts to develop a new, more resilient, harder-to-jam waveform that soldiers could use on the battlefield. The quest to solidify satellite communication links has taken on increasing urgency in recent years. As satellite communications has emerged as an integral component in the military’s command and control infrastructure, potential adversaries have stepped up their ability to disrupt such links.

The threat comes from “adversarial electronic jammers that are intended to disrupt and interfere with U.S. satellite communications,” leaders at SMC said. Protected tactical SATCOM is envisioned to provide worldwide, anti-jam communications to tactical warfighters in benign and contested environments.

In response, the Air Force is developing software and satcom ground equipment to boost the protection of WGS networks in the near term, and commercial systems at a later time. First in line for these upgrades are the Navy’s aircraft carrier strike groups in the Pacific, Mckenzie said. The Air Force will have this technology available for carrier strike groups in 2022, about 18 months sooner than previously planned.

The central piece of the cyber security upgrade is anti-jam communications software — called the Protected Tactical Waveform (PTW). A ground system, the Protected Tactical Enterprise Service (PTES) will manage the transmission of the waveform over WGS satellites and terminals. Boeing, which manufactures the WGS satellites, was awarded a seven-year, $383 million contract in November to develop the PTES. “We are doing agile software development to enable early use of the PTW capability,” said Mckenzie.

The anti-jam software and ground system only will work initially with WGS networks, said Mckenzie. If a commercial provider opted to use the PTW waveform, the ground system could be updated to interoperate with that vendor’s network. Military satcom users will need to upgrade their satellite terminals with new modems to operate the PTW waveform. The Air Force two years ago awarded three contracts — $39 million to Raytheon, $38 million to L3 and $33 million to Viasat — to develop prototype modems. The Army, Navy and Air Force will run separate competitions to decide which modems they will acquire for their specific terminals. For carrier strike groups, the Navy will have to buy PTW-capable modems to upgrade its satellite terminals aboard ships.

The service expects to receive responses from industry soon on a recent request for information around protected satellite communications. The request sought industry guidance on how best to implement a new, more resilient protected tactical waveform (PTW), which enables anti-jamming capabilities within protected tactical SATCOM.

In the long term, the plan is to add a new space component — either newly designed spacecraft or military communications payloads hosted on commercial buses. “Our goal is to have some protected tactical satcom prototype payloads on orbit in the fiscal year 2025 time frame,” said Mckenzie. Whatever new hardware makes up the space segment, it will be compatible with the PTES ground equipment, he said. Mckenzie noted that the Air Force has been criticized for deploying satellites before the ground equipment is available. The PTW and PTES efforts reverse that trend.

These are four areas “where we’re trying o reduce risk,” said McKenzie. The consortium was stood up in 2017 and given authorities to kick start projects with far less red tape than traditional Pentagon contracting. Mckenzie said the Air Force is interested in new ideas for constellation architectures, payload hosting concepts, advanced space processing and antenna designs.

The Space Force awarded L3 Technologies and Raytheon’s Space and Airborne Systems contracts worth as much as $1 billion for the development and production of new modems that would help with protected satellite communications. The indefinite-delivery/indefinite-quantity contracts, each worth as much as $500 million, are part of the Air Force and Army Anti-Jam Modem program, which is also known as A3M. The modems would be capable of handling the new Protected Tactical Waveform, which provides anti-jamming communications for warfighters on the battlefield.

The program is led by the Army’s Program Executive Office Command Control Communications – Tactical and the Space Force’s Space and Missile Systems Center. Space Force officials emphasized that they awarded the contract about four months ahead of schedule. In a request for information from 2018, military officials said the modem would be used in the Air Force Ground Multiband Terminal and Army Space Transportable Terminal. The contracts are also expected to include terminals or terminal components to work with the new Protected Tactical SATCOM system, commercial satellites and the Air Force’s Wideband Global SATCOM satellites.

The design and development of a next-generation waveform is underway, involving a consortium of European companies. The European Protected Waveform (EPW) is being developed under the 2019 European Defence Industrial Development Programme (EDIDP). Built around efficiency, security, affordability and interoperability, the waveform will provide a new standard in satellite communications.

@Rajesh Uppal@idstch
Previous Chinese Military now deploys all classes of drones and they have become part of its military strategy
Next Geopolymer an innovative material is widely useful as construction industry to military runways, insulation material, and rocket nozzles

The first space age is considered to be started in 1957. The 20th-century space race …