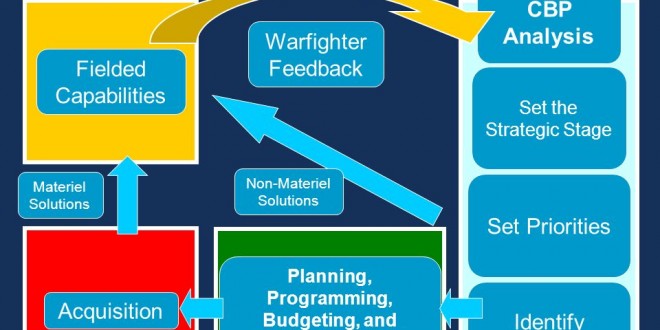 After the end of cold war, a new process for Defence planning was developed known as Capability-Based Planning (CBP). Capability-Based Planning was officially introduced into the U.S. military establishment in the 2001 Quadrennial Defense Review (QDR). “A capability-based strategy [is] one that focuses less on who might threaten us or where we might be threatened (Threat based approach), and more on how we might be threatened and what we need to do to deter and defend against such threats,” said Rumsfeld.

CBP has been widely adopted by many countries and many organizations apart from defence. The US Department of Homeland Security (DHS) began its adaptation and application of CBP in 2004, in response to presidential directive HSPD-839 to develop a national domestic all-hazards preparedness goal (‘Goal’) with mechanisms for improved delivery of Federal preparedness assistance to State and local governments. Australia has used CBP to plan and develop military capability since the 1970s. As there is no dominating threat or overriding hazard to the country’s security, strategic military planning considers a broad range of contingencies and threats.

However recently CBP also has been criticized because it led to many messy acquisitions due to “Strategic ambiguity, requirements creep, and the push to “transform” and “revolutionize” the military without any particular adversary in the sights that spawned such messy acquisitions,” according to Hon. Sharon Burke, a senior advisor at New America.

During the cold war there was only single monolithic adversary hence major powers relied on threat based planning. Threat-based planning focuses on one or a small number of fundamental threats, and the response system is designed to best match those contingences associated with the threats. Since the end of the Cold War in 1989, and the subsequent collapse of the Soviet Union two years later, the nature of war has changed considerably. Apart from conventional threats new threats have arisen included rogue states, and non-state actors such as insurgents, trans-national criminal organizations, terrorist groups, and violent religious extremists.

Australia’s first National Security Statement (NSS), recommended expanding national security from counter-terrorism to include all-hazards, such as industrial accidents and natural disasters, and stated that the NSS recognises that the list of non-traditional threats and new security challenges continues to grow and evolve. Threat-based planning is not practicable for the institutional agility required by Government under this evolving, dynamic, all hazards environment. The change to CBP was designed to move away from what, in the past, had often been a reactive force development process that not only proved to be unsatisfactory but had generally resulted in expensive solutions. Supporters suggest it provides “a more rational basis for making decisions on future acquisitions, and makes planning more responsive to uncertainty, economic constraints and risk.

However, increasingly CBP has also come under fire because it led to many highly complex and costly programs that had to be cancelled. And in the years since Rumsfeld’s first QDR, the Defense Department has wasted billions of dollars on what former Secretary of Defense Gates called “exquisite” programs: The Army’s canceled Future Combat System, the USMC’s canceled Expeditionary Fighting Vehicle, and the Navy’s curtailed and canceled next-generation destroyer and cruiser programs, writes Hon. Sharon Burke, a senior advisor at New America. These were all beautiful, breathtaking machines, but their technical complexity and high cost turned out to be a culminating point. Or in the case of the Navy’s Littoral Combat Ship and the Air Force et al’s Joint Strike Fighter, they lumber on in the FY 2015 budget.

It is the ability to link strategy, operating concepts and the acquisition of equipment to exploit specific weakness that is at the heart of the Threat Based Planning approach. According to Col. Michael W. Pietrucha, USAF, that type of focus is currently lacking with Capability-Based Planning. He states, “In embracing CBP, we have become focused on a fog bank—the nameless, faceless adversary who may be technologically advanced and may even be a “near peer” in a similarly undefined way. But that adversary has no connections to any geography, culture, alliance structure or fighting methodology.” He believes that the current Capability-Based Planning process is totally disconnected from the realities of actually fighting a war in favour of fighting an enemy.

Major Tony Balasevicius, who retired from the Canadian Forces in 2013 argue that In light of this changing security environment, the rational for using CBP is no longer valid. The process needs to return to the traditional and more focused TBP. Moreover, it clearly shows that any notion that Western nations still live in an era of ambiguous threats is no longer valid. He asserts, the future security environment is now emerging with clear and present dangers and they need to be dealt with in a coherent and focused manner. This must start with a well-defined strategic concept on how to win a war rather than the current practice of producing capabilities to defeat the capabilities of a generic enemy. The Russians, Chinese and ISIS all know who their enemies are. More importantly, they have been studying Western methods of warfare since 1991 to find weaknesses that they can exploit,” he writes.

Defence Planning is a very complex area that influences future defence effectiveness and efficiency. Defence planning seeks to ensure that a nation has the necessary forces, assets, facilities and capabilities to fulfil its tasks throughout the full spectrum of its missions.

The Technical Cooperation Program (TTCP)—a collaboration between five nations for defence scientific and technical information exchange—summarised the common features used by the TTCP nations in its Guide to CBP, and provided a generic process chart for implementing CBP.
The first stage of the CBP process takes an outward-looking, strategic, ‘topdown’ perspective in understanding the demands of the operating environment, the expectations of government, and the way the defence force should operate and apply its capabilities. In general, capability goals are statements, in specific and measurable terms, about the desired level of capability needed to meet defence priorities, and hence government objectives.

Canadian Forces utilizes the information contained in the following series of documents as the principal inputs into the CBP process. Defence policy statements, such as the Canada First Defence Strategy, outline how the Canadian government plans to meet current and future defence and security challenges.
The Future Security Environment Report (FSE) , describes the world in which the CF might have to operate over the next 20 years. It identifies current and emerging security trends, as well as real and potential threats. To provide the information necessary for CBP, the FSE Report outlines the trends in the following areas: political, social and economic, resource and environmental, science and technology, and military.

The Force Planning Scenario (FPS) set depict a range of domestic, continental and international situations in which the CF anticipate conducting operations across the full spectrum of conflict.
The CBP process takes current government policy together with the FSE projections and uses this information in the analysis of each scenario to determine the capabilities that will be required in the future. During this step, the objective is to identify what capabilities are required, rather than how the capabilities should be provided.

The next step is to identify how well the CF is able to meet that capability goal and what deficiencies exist. For each of these deficiencies, the CBP staff develops a prioritized list of alternative solutions with the assistance of an Integrated Capability Analysis Team (ICAT) comprised of subject-matter experts from the command and operational communities.

The second stage of the CBP process, which takes an introspective or ‘bottom-up’ view, assesses the performance of the current system with respect to capability goals, to inform decisions for remedial action. There is a comprehensive identification of capability gaps, including both capability deficiencies and excesses.