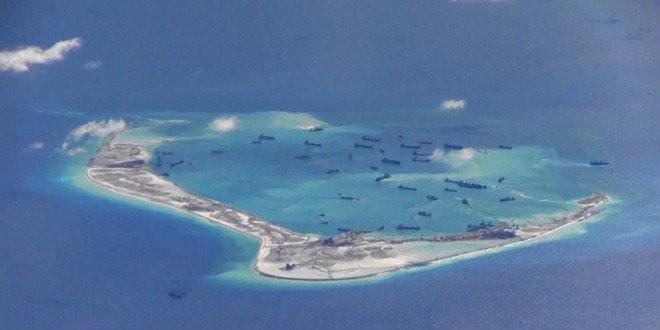 China has carried out militarization of Spratly Islands and other islands in South china sea by building military bases on them along with giant runways, ports, bunkers, and sensor arrays. Several islands were constructed with airstrips and harbors capable of accepting military aircraft and warships.  China has also deployed anti-ship missiles, surface-to-air missiles, electronic jammers and other equipment on the Spratly Islands, and landed a bomber aircraft at Woody Island.

China Coast Guard deploys Patrol vessels for Marine Surveillance especially to locations in the South China Sea and East China Sea where China has territorial disputes over islands with its neighbors. This activity is part of China’s increasing assertiveness in the South China Sea, encountering opposition from Japan, the Philippines and Vietnam in the disputed territories, as China tries to lock up natural resources to meet its demands as the world’s largest energy consumer. One senior US naval intelligence officer has suggested that the mission of China Marine Surveillance is to “harass other nations into submitting to China’s expansive claims.”

Now China has stepped up its marine surveillance by new lightweight, remote sensing platforms which China’s Ministry of National Defense has hinting that they may be deployed for military application in the South China Sea to aid protecting island construction and monitoring contested areas.

The platforms were debuted recently at the 2019 Langkawi International Maritime and Aerospace Exhibition, a major regional defense exposition hosted in Malaysia. They are built by the China Electronics Technology Group Corporation, a state-owned enterprise specializing in high-technology defense and security products, especially sensors, communications, and networking solutions.

The platforms come in two versions: a floating integrated information platform and a larger integrated information system meant to be installed on an island or reef. The ministry says that both systems are able to work as nodes in a sensor network providing multi-dimensional situational awareness, information services, and surveillance. These capabilities would have application for reef construction and protection, but also maritime research and public services.

However, while the platforms might effectively provide environmental monitoring, weather surveillance and tsunami early warning, and auxiliary navigation services, they can also provide “continuous surveillance of [an] offshore target,” and might play important roles in control of it’s Nansha [Spratly] and Xisha [Paracel] Islands, and reefs through continuous monitoring of targeted waters.”

This is also China’s version of Ocean of things, which could form a distributed network of mobile and deployable platforms which may fill the gaps in maritime surveillance of already constructed network of long-range sensors and arrays on its major bases in the Spratly Islands. This will allow China to monitor the activity about commercial vessels, aircraft, moving through the area.

As Peter Dutton of the U.S. Naval War College points out, even China’s large coast guard and maritime militia fleets are too small to effectively patrol the South China Sea; even a generous accounting suggesting China has just one vessel for roughly every 2,700 square miles of water over which China claims jurisdiction. To use its fleets more effectively, platforms like these might provide a more accurate picture of where concentrations of regional fishermen or law enforcement vessels are and are not. China could then use this information to cue its own coast guard and maritime militia fleets to conduct “rights protection” missions against rival claimants without wasting assets to patrol empty waters.

Marine transport is the backbone of international trade. As per the data revealed by the …