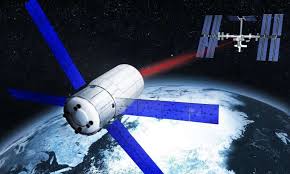 In recent years, high power fiber and semiconductor laser technology has improved rapidly, with power density increasing by an order of magnitude or more. Much of this increase has been driven by demand for industrial cutting machines and high-bandwidth, long-range telecommunications. These same laser materials and devices can also be used as directed energy weapons against personnel and electro-optical and infrared (EO/IR) sensors. Purposeful laser strikes on aircraft have increased rapidly over the last decade. In 2018, the Wall Street Journal reported that hostile forces have been lasing American planes with laser pointers at a growing rate and these irradiance incidents have the potential to affect the operation of EO/IR sensors.

Lasers are a source of collimated, monochromatic, coherent light that can travel long distances with very little loss of intensity. This coherent property is what allows a laser to maintain a narrow, high-powered beam over long distances. This is also the cause of lasers being able to do damage to sensors, facilities, and personnel at a long range.  Military Lasers can also causes damage to optical components like mirrors, fibers, nonlinear crystal materials, prisms, optical filters, optical modulators and saturable absorbers, photodetectors and SESAMs.

Small, lightweight, high-energy laser systems are a reality today due to decades of research activity. High power, small footprint lasers enable deployment of mobile and transportable high-energy laser systems. The small form factor makes these systems easy to disguise and bring into environments without detection. For example, such systems could be hidden in a delivery van or in a truck carrying supplies. Small lasers could be hidden in a backpack and carried into public venues. Given these advances in laser technology, there exists a need for low SWaP laser detection systems that are easily transportable and work in both day and night conditions to alert personnel of active lasing.

Therefore military forces involved in multinational operations are increasingly looking for technologies both for protection of eye as well as optical components from lasers used by both friendly and foe. Keeping pace with rapidly advancing and eminently available laser technology requires a sophisticated and pragmatic countervailing response.

Camera sensors are, in general, more susceptible to damage than the human eye

The camera lens will gather much more light than the human eye. This is focused by the mirror in an SLR or DSLR camera into the viewfinder, thus increasing the amount of laser light. (This is not the case for any camera or camcorder where a person views the image on a screen.). Similarly, persons should not use binoculars, a telescope or similar optical light-gathering devices to view audience scanning lasers.

The severity of damage can vary widely. In case of minor damage, such as small areas of a few pixels which no longer work. The pixels are not noticeable unless in an area of uniform color such as a blue sky. Damage to one location may result in a horizontal or vertical line. In such a case, data from the entire row or column of sensors can no longer be read out properly. In more extreme cases, there may be larger or more extensive dead-pixel areas. Or there may be “burn in” of a laser image. The damage is readily noticeable in most photos or videos. In this case, the camera is ruined for quality use.

Sensor protection is another emerging area where laser notch filters are making a significant impact. With the proliferation of laser weapons and advanced sensor technology in weapons platforms, it is important for the military to find solutions to combat enemy lasers. Enemy lasers can render satellites, airplanes, drones and ground vehicles ineffective by damaging sensors. It is essential for coatings to block or redirect damaging laser light away from sensitive components within these systems, while maximizing transmission of non-threat, i.e. in-band wavelengths of light needed for human (visible) or sensor (typically IR) detection, thus facilitating improved signal to noise ratio at the critical sensors.

Military pilots are not only at risk of temporary blindness due to hand-held lasers, but are also subject to being “designated” by laser targeting. Generally in connection with military aircraft, laser detection devices register laser radiation from laser rangefinders or laser designators and by a warning signal to make clear to the designated aircraft, i.e., pilot, that laser illumination has occurred or is continuing. Reliable detection and identification of laser radiation may be critical to mission success and accurate information related to the type of laser may provide for appropriate countermeasures.

“The present invention is a laser detection and warning system may include a detector configured to be mounted to an aircraft, the detector including an optical subsystem, a detector subsystem, and a processor subsystem to determine characteristics of incoming laser radiation and transmit a laser warning output signal, wherein the laser warning output signal includes wavelength characteristics of the laser radiation and corresponding protective eyewear type.

To address the present lack of effective laser strike mitigation systems, the Laser Technology and Applications and Air Traffic Control Systems groups at Lincoln laboratory have teamed up to develop the Laser Aircraft Strike Suppression Optical System (LASSOS). LASSOS is a ground-based sensor system that can accurately identify the probable location of a perpetrator of a laser strike and immediately notify law enforcement.

“These sensors can provide persistent, automated protection for a high-risk volume of airspace, such as a final approach path, by quickly locating the origin of a laser strike and transmitting the coordinates to local law enforcement,” says Tom Reynolds, a member of the development team and the associate leader of the Air Traffic Control Systems Group. “This technology will enable law enforcement to launch a rapid and targeted response to a laser strike event, greatly increasing their chance of apprehending and prosecuting perpetrators.”

The system works by capturing side-scattered laser light and tracing it back to the perpetrator’s location. When a laser is pointed into the sky, a small fraction of its light is scattered by air molecules and aerosols, forming a residual streak in the laser’s path. Two or more high-sensitivity, low-noise, charge-coupled device cameras image the scattered light from different vantage points, providing the geometric diversity needed to digitally reconstruct the laser streak in three dimensions. The geographic coordinates of the laser’s origin are calculated by tracing the laser streak down to a topographically accurate model of the Earth’s surface.

A feature of LASSOS that makes it particularly effective is its integration with Google Earth. As soon as a laser is detected by the cameras, a digital reconstruction of the streak appears on a Google Earth map in real-time. This image summarizes the detection event, depicting the laser’s point-of-origin and most probable path through the night sky. Within 30 seconds of the image being captured, LASSOS provides nearby members of law enforcement with the perpetrator’s GPS coordinates, nearest address, and the time of the incident. This information allows officers to rapidly intervene.

This technology will significantly increase laser strike origin detection and perpetrator apprehension,” says Brian Saar, principal investigator in the laboratory’s LASSOS team and an assistant group leader in the Laser Technology and Applications Group. “As culprits are readily apprehended and prosecuted, the appeal of laser strikes as a crime with low risk of detection will decline.”

The system prototype has already demonstrated its speed and accuracy in several tests. For one test trial, LASSOS’s geolocation ability was tested at a distance of nine nautical miles, to simulate the typical length of a final approach path when an aircraft is most vulnerable to lasing. One sensor was placed on top of the B Building at Lincoln Laboratory and another on the Flight Test Facility at Hanscom Air Force Base. Testers shone high-power laser beams of the type commonly used during lasing events from a baseball field nine nautical miles away in Tewksbury, Massachusetts, and were geolocated by LASSOS in less than 30 seconds. The system was so accurate that it could distinguish whether the laser beams came from first, second, or third base.

Considering LASSOS’s promising performance and versatile capabilities, researchers believe that in the future the system could be used to protect other targets of laser strikes, including ships, automobiles, and even individual people.