The warning comes following a virtual roundtable event jointly hosted by Chatham House (the Royal Institute of International Affairs), the University of Birmingham and BAE Systems – bringing together scientists, engineers and policymakers. They explored the range of potential impacts of quantum sensing, how best to develop sensors capable of meeting anticipated technological advances, and how to increase awareness and understanding of these new technologies. Everything from flying taxis, driverless delivery vehicles and improved timing systems, upon which 10 per cent of the UK economy depends, will rely on a new generation of sensors for smooth, safe, and secure operation.

Professor Bongs, who was keynote speaker at the roundtable event, , said policymakers need to address the sensor innovation deficit now if technological advances are not to stall. He added: “We need to find ways to identify what sensors will be needed to do, and where in our economy, particularly as we enter a quantum era with its promise of huge change. We must encourage the development of new sensors that are up to the challenges of technology where they will be crucial.

Prof Bongs said that quantum technologies have huge potential to unearth new and needed information about the world. Quantum-enabled devices will be transformative in many different areas, including secure communications, autonomous transportation, climate change, navigation, stealth detection and brain imaging.

In 2018, a UK team for the first time  demonstrated a transportable, standalone quantum accelerometer at the National Quantum Technologies Showcase, an event demonstrating the technological progress arising from the UK National Quantum Technologies Programme – a £270m UK Government investment over five years. Accelerometers have existed for some time, and are present today in technologies like mobile phones and laptops. However, these devices cannot maintain their accuracy over longer periods without an external reference.

The UK’s first commercially viable quantum accelerometer, which could be used for navigation was demonstrated by a team from Imperial College London and M Squared in 2018. The quantum accelerometer relies on the precision and accuracy possible by measuring properties of supercool atoms. At extremely low temperatures, the atoms behave in a ‘quantum’ way, acting like both matter and waves. It was inspired by the discovery that lasers can trap and cool a cloud of atoms placed in a vacuum to a fraction of a degree above absolute zero.

Once chilled, the atoms achieve a quantum state that is easily perturbed by an outside force – and another laser beam can then be used to track them.  As the atoms fall, their wave properties are affected by the acceleration of the vehicle. Using an ‘optical ruler’, the accelerometer is able to measure these minute changes very accurately. To make the atoms cold enough, and to probe their properties as they respond to acceleration, very powerful lasers that can be precisely controlled are needed.

Dr. Joseph Thom, Quantum Technology Scientist at M Squared, said: “As part of our work in commercialising cold atom quantum sensors, we developed a universal laser system for cold atom-based sensors that we have already implemented in our quantum gravimeter. This laser is now also used in the quantum accelerometer we have built in collaboration with Imperial. Combining high power, exceptionally low noise and frequency tunability, the laser system cools the atoms and provides the optical ruler for the acceleration measurements.” 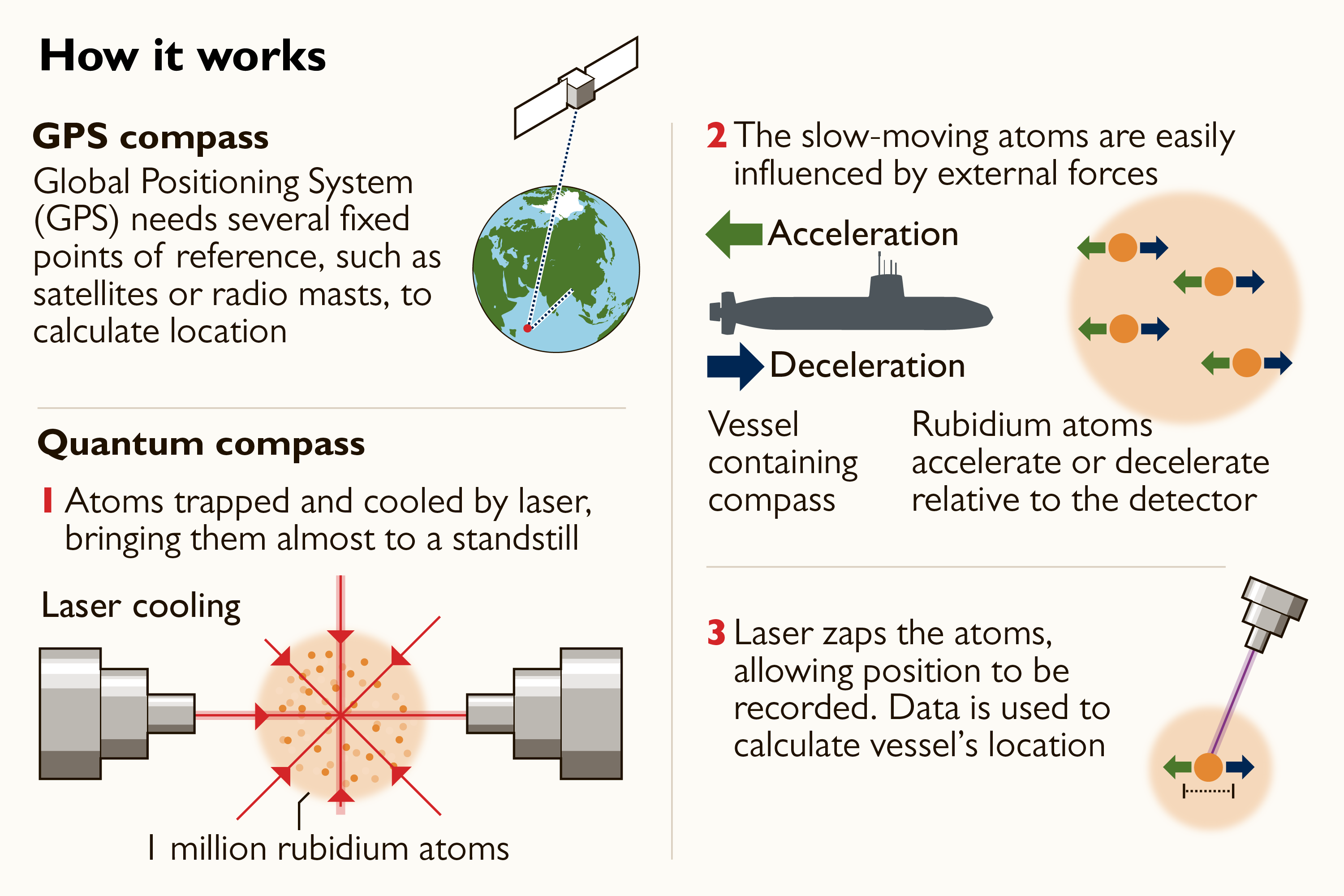 The current system is designed for navigation of large vehicles, such as ships and even trains. However, the principle can also be used for fundamental science research, such as in the search for dark energy and gravitational waves, which the Imperial team are also working on. Professor Ed Hinds, from the Centre for Cold Matter at Imperial, said: “I think it’s tremendously exciting that this quantum technology is now moving out of the basic science lab and being applied to problems in the wider world, all from the fantastic sensitivity and reliability that you can only get from these quantum systems.”

Dr. Graeme Malcolm, founder and CEO of M Squared, said: “This commercially viable quantum device, the accelerometer, will put the UK at the heart of the coming quantum age. The collaborative efforts to realise the potential of quantum navigation illustrate Britain’s unique strength in bringing together industry and academia – building on advancements at the frontier of science, out of the laboratory to create real-world applications for the betterment of society.”

A quantum accelerometer uses atom interferometry to measure accelerations along a horizontal axis. Quantum accelerometers are able to achieve a combination of sensitivity and stability by exploiting quantum interference. As such, they will be critical components of a quantum inertial navigation unit, which will offer satellite-free navigation with unparalleled long-term accuracy. A phase locked SolsTiS system underpins this setup and provides the extremely low phase noise required to make high sensitivity measurements and dynamic frequency tunability to address multiple atomic transitions.

Teledyne e2v’s Space & Quantum team, a part of the Teledyne Imaging Group, based in Essex in the UK are collaborating with STFC RALSpace and University of Birmingham in the development of the Cold Atom Space Payload (CASPA) Accelerometer, reported in Nov 2020.  The CASPA Accelerometer project will develop a cold atom quantum instrument in an autonomous, low power, compact form factor, in preparation for a future space mission to take sensitive measurements of atmospheric drag.

The new accelerometers are based on an area of quantum technology that uses alkali atoms, which are cooled by lasers close to absolute zero, without the use of cryogenics. The sensors will enable a dramatic step forward in our understanding of upper atmospheric dynamics and drive advances in climate modelling, weather forecasting and satellite orbit prediction. This project will build on Teledyne e2v’s previous work to build the Cold Atom Space Payload (CASPA) CubeSat, which demonstrated a cold atom trap and represents a major step toward using cold atoms for space applications. This industrial and academic collaboration aligns strongly with the key objectives of the UK Space Agency EO technology strategy, and reinforces the UK’s position as a world leader in the provision of cold atom payloads and sensors for a new generation of Earth observation satellites.

Lead researcher Stephen Till said: “we need a massive cryogenic refrigerator 10 to 20 years ago, but the laser cooling of atoms cloud changed everything, refrigeration technology in the next generation may extend to every aspects, from cars to intelligent mobile phone. “We believe it will be in terms of energy consumption down to size and can be installed on the dashboard.” This new technology should also make navigation systems less susceptible to interference. “There is nothing in physics that could be used- given the knowledge we have now- to disrupt one of these [new] devices,” Bob Cockshott of the NPL told the Financial Times.

Their 1-meter-long, prototype quantum accelerometer operating along just one axis was developed in 2014. They  planned  to add two more sets of lasers each cooling 1 million trapped rubidium atoms to accommodate motion in all three dimensions.

The next step is to miniaturize the technology, perhaps making it compact enough to be integrated in a single chip. Team leader Stephen Till of DSTL, however, envisages its eventual application in a variety of commercial products such as cars and mobile phones. “We’re convinced the size and power will come down. The ultimate challenge with quantum positioning may be its exquisite sensitivity to gravity forces.

This looks out for any changes caused by a perturbation, which are then used to calculate the size of the outside force which corresponds to the movements of the submarine. It’s not a done deal yet, though, because the accelerometer can’t distinguish between tiny gravitational effects and accelerations caused by a vessel’s movement. “If the submarine passes an underwater mountain whose gravity attracts it to the west, that feels exactly like an acceleration to the east,” says Edward Hinds at the Centre for Cold Matter at Imperial College London, who is developing the accelerometer for the DSTL. “This means that very good gravity maps will be required to navigate correctly.”

This technology may have the greatest impact in Navigation of future generations of missiles and PGMs. According to John Powis, former navigator on Royal Navy submarines and head of the NATO Submarine Rescue Service in Faslane, this technology could be very useful in warfare. “The submarine does not need to know its position in meters and centimeters, but a projectile like a missile or shell might,” he told New Scientist. The US, China and Australia are also pursuing quantum navigation.

Most navigation today relies on a global navigation satellite system (GNSS), such as GPS, which sends and receives signals from satellites orbiting the Earth.   However,  satellite signals can become unavailable due to blockages such as tall buildings, or can be jammed, imitated or denied – preventing accurate navigation. One day of denial of the satellite service would cost the UK £1 billion.

One of the technologies that is useful in GPS denied environments is quantum accelerometer, that  is a self-contained system that does not rely on any external signals. Now, for the first time, a UK team has demonstrated a transportable, standalone quantum accelerometer at the National Quantum Technologies Showcase, an event demonstrating the technological progress arising from the UK National Quantum Technologies Programme – a £270m UK Government investment over five years.

Quantum accelerator shall also be useful  for Submarine navigation  that today still rely on inertial navigation – a device which uses gyroscopes and accelerometers to estimate the course through water without any external input or data. By measuring the force of acceleration through Accelerometers sub’s movement from a last known position can be calculated. The inherent errors in accelerometers can cause sub to be off course by a kilometer in a day.

To maintain accuracy, the submarine must periodically update its position using outside navigational radio signals normally provided by the GPS. However, GPS signals do not penetrate the ocean – they only way to get a GPS position fix is to poke an antenna above the water, which can compromise submarine’s stealth. Now Researchers are developing quantum accelerometers that could be a thousand times more accurate with an error of just one meter helping submarines to navigate accurately without having to surface.