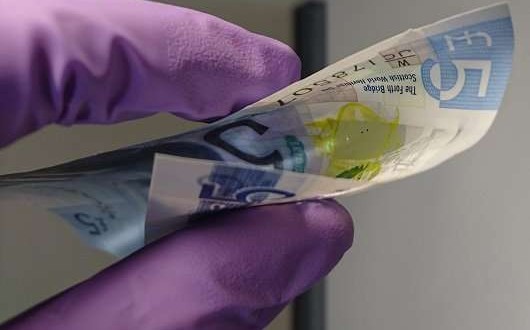 Organic semiconductors enable the fabrication of a range of lightweight and mechanically flexible optoelectronic devices. Organic LEDs, solar cells, and field-effect transistors are now routinely made in bendable or even stretchable formats and with extremely low specific weights.

Most organic semiconductor lasers, however, have remained rigid and relatively bulky until now, predominantly due to the need for macroscopic and solid support substrates (typical substrate thickness, >100 µm).

Optically pumped organic solid-state lasers have gained widespread attention as coherent light sources that are easy to fabricate, have emission tunable across the whole visible range, and are potentially disposable and biocompatible. These lasers hold great promise for a number of applications, e.g. for on-chip spectroscopy, data-communication, biosensing, and chemo sensing for detecting explosives.

Researchers from The University of St Andrews have developed an ultra-thin membrane organic semiconductor based laser, that could be harnessed for new applications in security, biophotonics and photomedicine.

They were then able to stick these ultra-thin lasers onto banknotes and contact lenses, where they suggest the devices could be used as flexible and wearable security tags. Flexible organic optoelectronics – in particular for displays, photovoltaics and wearable sensors – are on the verge of large-scale commercialisation, with prototype devices already achieving staggering form factors and bending curvatures. The findings have been published in Nature Communications.

The research team led by Professors Malte Gather, Ifor Samuel and Graham Turnbull have developed a new laser that approaches the fundamental limit in specific weight and thickness, as well as an exceptional mechanical flexibility, which allows to put them on a contact lens or a bank notes

“Here, we introduce a different organic laser that maximizes mechanical flexibility and reduces the thickness of the laser to its ultimate limit, by using an architecture that comprises only the organic semiconductor and a DFB resonator and that is fabricated by a wholly solution-based process. The resulting 200-nm thick membrane lasers were operated freestanding in air or readily transferred onto a new substrate, on which direct fabrication of a laser may otherwise be impossible or impractical.”

The team also demonstrated that the devices were flexible and mechanically robust, even when attached to another object, and that their optical properties did not change over the course of several months.

Gather’s group is testing (on cow eyes) flexible lasers that have been implanted into contact lenses, which could be used for security screening. “In practice, you would have an LED light pulse coming at the contact lens, and that would stimulate a beam of light coming out,” says Gather. The laser works at relatively low powers, meaning that both the excitation light and the emitted light are totally safe.

“The pump thresholds and emission intensity of our membrane lasers are well within the permissible exposures for ocular safety and we demonstrate integration on contact lenses as wearable security tags.”

Due to the low threshold of our membrane laser, a similar configuration is expected to be safe to use in the human eye, e.g. to complement biometric iris recognition. He notes that they have improvements to make on the optics side to improve performance and stability-and presumably the visual comfort for the would-be human wearer—but the technology has officially made the jump from sci-fi to prototype.

Gather presented his group’s latest work on substrate-free and flexible membrane lasers, which can be transferred onto various substrates for a number of foreseeable uses, including bank note security. Most paper currencies now include security measures like holograms, fluorescent fibers, and color-shifting ink. A flexible laser could be added to the note. When the laser is excited by an external light source, the laser would emit a combination of specific wavelengths of light, adding an additional level of security.

It’s a level of security that would be nearly impossible to counterfeit, and could replace or complement the pens that are often used to mark large-currency bills for signs of counterfeiting. “Of course, that’s our competition,” says Gather. “The pens are incredibly cheap.”

But Gather is not deterred. His lab is constantly looking for ways to make laser technology cheaper, while also looking for interesting applications.