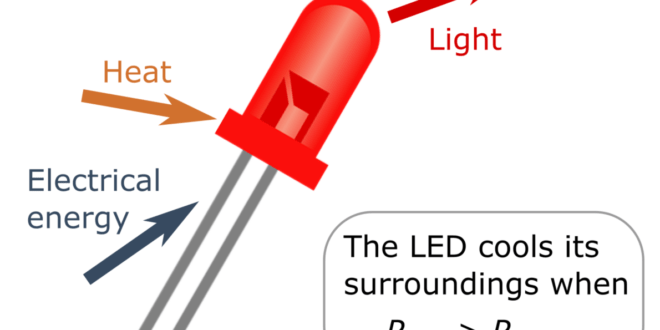 Thermophotonics (often abbreviated as TPX) is a concept for generating usable power from heat which shares some features of thermophotovoltaic (TPV) power generation. Thermophotonics was first publicly proposed by solar photovoltaic researcher Martin Green in 2000. However, no TPX device is known to have been demonstrated to date, apparently because of the stringent requirement on the emitter efficiency.

The currently ubiquitous light-emitting diodes (LEDs) have revolutionized the lighting industry. Contrary to common belief, however, LEDs are much more than just simple electricity-to-light converters. They are solid-state thermodynamic machines, theoretically capable of continuous and near-reversible energy conversion between electrical, thermal and optical energy.

For almost 60 years, we have known that when an electron-hole pair recombines in certain light-emitting diodes (LEDs), the energy of the emitted photon (light, energy Eout = hν) can exceed the energy of the injected charge carriers (applied current, energy Ein = qV). For this phenomenon, hν > qV, to make physical sense, a portion of the energy of the photon must be taken from somewhere – in this case phonons (heat) in the crystal lattice. The result is that the LED can function as a cooling element, drawing heat from the crystal. In this situation, the wall-plug efficiency (WPE), defined as the ratio of the total optical output power to the input electrical power and therefore also called the electrical-to-optical power-conversion efficiency, has a value above unity.

A TPX system consists of a light-emitting diode (LED) (though other types of emitters are conceivable), a photovoltaic (PV) cell, an optical coupling between the two, and an electronic control circuit. The LED is heated to a temperature higher than the PV temperature by an external heat source. If no power is applied to the LED, the system functions much like a very inefficient TPV system, but if a forward bias is applied at some fraction of the bandgap potential, an increased number of electron-hole pairs (EHPs) will be thermally excited to the bandgap energy. These EHPs can then recombine radiatively so that the LED emits light at a rate higher than the thermal radiation rate (“superthermal” emission). This light is then delivered to the cooler PV cell over the optical coupling and converted to electricity.

The control circuit presents a load to the PV cell (presumably at the maximum power point) and converts this voltage to a voltage level that can be used to sustain the bias of the emitter. Provided that the conversion efficiencies of electricity to light and light to electricity are sufficiently high, the power harnessed from the PV cell can exceed the power going into the bias circuit, and this small fraction of excess power (originating from the heat difference) can be utilized. It is thus in some sense a photonic heat engine.

Only if the external quantum efficiency (EQE, the ratio of successfully extracted photons to injected charge carriers) of the LED is close to unity or the photon energy hν is considerably higher than the applied voltage qV to the LED, the WPE = EQE × ( hν / qV ) can exceed unity

For over 50 years, the possibility of exploiting LEDs as efficient solid-state coolers has remained largely out of reach due to the high-material-quality requirements and commercial focus on light emission. Recent promising advances in electroluminescent cooling by LEDs, however, suggest that the remaining challenges in the area may be surmountable and practical cooling could be feasible.

Although the theoretical potential of ELC has been known for a long time, it was only recently that ELC was demonstrated in the laboratory – although for extremely low cooling powers. With the increase in the efficiencies of LEDs in general, several groups have started looking into the use of ELC for practical purposes.

A patent application for a thermophotonic generator using a vacuum gap with thickness on the order of a micrometer or less was published by the US Patent Office in 2009 and assigned to MTPV Corporation of Austin, Texas, USA. This proposed variant of the technology allows better thermal insulation because of the gap between the hot emitter and cold receiver, while maintaining relatively good optical coupling between them due to the gap’s being small relative to the optical wavelength.

Possible applications of thermophotonic generators include solar thermal electricity generation and utilization of waste heat. TPX systems may have the potential to generate power with useful levels of output at temperatures where only thermoelectric systems are now practical, but with higher efficiency.

There is a multitude of areas where sub-zero temperatures are required in space, from the storage of lunar material to the cooling of infrared (IR) cameras and other sensors. Because the transportation of equipment and materials from Earth results in huge costs, with an estimated price of around 500 000 €/kg to the Moon in 2008, lightweight cooling systems are highly sought.

ESA’s advanced concept team is working together with researchers from Aalto University  on how to make use of this technology in the space sector. LEDs are not highly efficient refrigerators, but they are lightweight, gravity-agnostic, vibrationless, small-footprint, and without any byproduct except light, all of which are of importance for space-based technologies. The focus of this project is on the use of ELC LEDs for refrigeration of vacuum flasks, where a proof-of-concept design is proposed.

Aaswath Raman, a UCLA assistant professor of materials science and engineering, has received a 2021 Young Faculty Award from the Defense Advanced Research Projects Agency (DARPA) of the U.S. Department of Defense.

The award includes a two-year, $500,000 grant to support his research on thermo-photonic cooling devices. These devices combine electronic and photonic innovations to enable LEDs to act as electroluminescent coolers that can help bring down the temperatures of other electronic devices, such as infrared imaging sensors. The research project could receive an additional $500,000 in funding after the initial two years.

Raman’s research focuses on how to control light and heat at the nanoscale. Working from a multidisciplinary computational and experimental perspective, his laboratory designs, creates and studies metamaterials and photonic devices that can shape, absorb and emit light in highly unusual but advantageous ways over a broad range of wavelengths. His group also connects these advancements to solid-state and electronic devices to enable new functionalities.

In addition, Raman has invented a range of methods and materials to cool down buildings without traditional air conditioning, even harnessing the coldness of the night sky as a tool to reduce the temperatures of objects on earth. He has also developed superwhite paints to better reflect the sun’s rays away from buildings, keeping exterior surfaces cooler than the surrounding air temperature. Recently, Raman has been fine-tuning materials for interior walls that can help keep rooms cooler in the summer and warmer in the winter. His latest work has yielded fundamental breakthroughs in optical materials to beam broad-spectrum thermal radiation in specific directions.

@Rajesh Uppal@idstch
Previous Virtual and Augmented Reality (VR/AR) role in Defense, Security, and Disaster Management
Next Biophotonics for Defence and Security from chemical and biological sensors to military Medicine