One of the great attractions of optical circulators is the relatively low level of loss. Typical devices give a port-to-port loss of between 0.5 dB and 1.5 dB.

Optical circulators are very versatile devices and may be used in many applications. For example, a bidirectional link consisting of two fiber strands (one for each direction) is multiplexed onto a single strand of fiber. This might be done to save the cost of fiber. 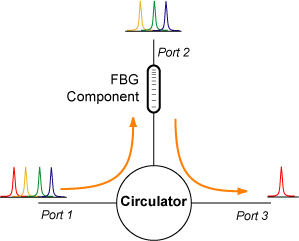 The example to the left depicts the use of a circulator to drop an optical channel from a DWDM system using a Fiber Bragg Grating (FBG). The input DWDM channels are coupled into Port 1 of the device with a FBG device connected to Port 2. The single wavelength reflected from the FBG then reenters the circulator in port 2 and is routed accordingly to Port 3. The remaining signals pass through the FBG and exit on the top fiber.

Duplex Transmitter/Receiver System: Optical circulators can be used to enable 2-way transmission along a single fiber. Transmitter 1 sends signal through Port 1 of Circulator 1 and through the fiber to Port 2 of Circulator 2 so that it is directed to Receiver 2. The signal from Transmitter 2 follows the opposite path to Receiver 1.

Double Pass Erbium Doped Amplifier: This technique allows high gain amplification of a signal through an erbium doped fiber amplifier. The signal passes through optical circulator and optical amplifier, returns from the fiber optic reflector and passes through the amplifier again. This amplified signal is directed through the return port.

In 2018, Researchers reported to have developed a vibrating glass ring optical circulator that interacts with and routes light. The breakthrough removes the problems associated with miniaturising the centimetre-sized magnets on optical chips presently required to route light. The researchers, at the Netherlands’ Atomic and Molecular Physics (AMOLF) organisation and the University of Texas, say they have created a microscale circulator that directionally routes light on an optical chip without using magnets.

Circulators allow the transmission of information, without loss, among more than two nodes in a network; this is why they are already widely used in optical networks. Circulators have several entrance and exit ports between which they route light in a special way: light entering a particular port is forced to exit in a second port, but light entering that second port exits in a third port and so on.

“Light propagation is symmetric in nature, which means if light can propagate from A to B, the reverse path is equally possible. We need a trick to break the symmetry”, explains AMOLF Group Leader Ewold Verhagen. “Usually this ‘trick’ is using centimetre-sized magnets to impart directionality and break the symmetric nature of light propagation. Such systems are difficult to miniaturise for use on photonic chips.” Verhagen and his colleagues create circulating behaviour using a microscale glass ring resonator with a different trick. They let light in the ring interact with mechanical vibrations of the same structure. The researchers used this principle in earlier work to demonstrate one-way optical transmission.

“By shining light of a ‘control’ laser in the ring, light of a different colour can excite vibrations through a force known as radiation pressure, but only if it propagates in the same direction as the control light wave,” notes Verhagen. “Since light propagates differently through a vibrating structure than through a structure that is standing still, the optical force breaks symmetry in the same way as a magnetic field would.” Turning the ‘one-way street for light’ they demonstrated before, into a useful optical ‘roundabout’ was not as straightforward as it may seem, as postdoc John Mathew points out: “The challenge is to dictate the particular exit to which light can be routed, such that it always takes the next port.”

The researchers found the solution in optical interference. Careful control of the optical paths in the structure ensures that light from each input constructively interferes in exactly the right output. “We demonstrated this circulation in experiments, and showed that it can be actively tuned. The frequency and power of the control laser allow the circulation to be turned on and off and change handedness”, says Mathew. “Devices like this could form building blocks for chips that use light instead of electrons to carry information, as well as for future quantum computers and communication networks,” ventures Verhagen. The AMOLF/University of Texas research is published in Nature Communications.

Fiber Optic Circulators Market is growing at a High CAGR during the forecast period 2020-2026. The increasing interest of the individuals in this industry is the major reason for the expansion of this market. Fiber optic circulators majorly find application in the healthcare and medical industry, which is expected to drive the market growth over the forecast period.

On the basis of region, the market is segmented into North America, Europe, Asia Pacific, Latin America, and the Middle East and Africa. North America is expected to account for the largest market share during the forecast period, owing to the presence of key players in the region such as Ascentta, Inc., Aviation Magneto Optical Sensor Corp., and Boston Applied Technologies Incorporated. Asia Pacific is also expected to witness significant market growth due to the technological advancements and large-scale adoption of IoT technology in IT and telecommunication as well as the administrative sector.