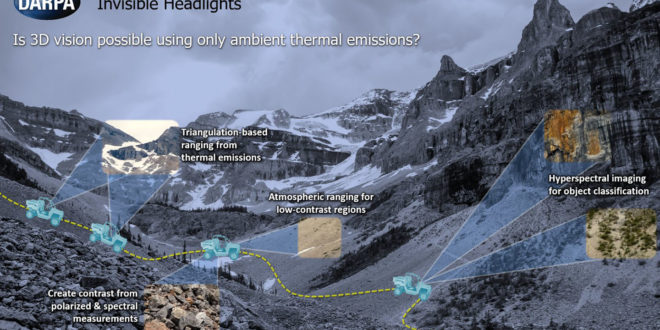 A new programme from the US Defense Advanced Research Projects Agency (DARPA) aims to address a key weakness of autonomous and semi-autonomous land systems: the need for active illumination to navigate in low-light conditions.

Accurate position and attitude information of the vehicle as well as the ability to detection static and dynamic obstacles around it are among the crucial requirements of autonomous vehicle technology that is a particularly challenging in urban areas. Autonomous and semi-autonomous systems need active illumination to navigate at night or underground. However, for military autonomous systems this degrades the survivability of platform. Switching on visible headlights or some other emitting system like lidar allows adversaries to detect a vehicle’s presence, in some cases from long distances away.

The object of Invisible Headlights is to enable completely passive navigation even in pitch-dark conditions, stated Joe Altepeter, program manager in DARPA’s Defense Sciences Office. “In the depths of a cave or in the dark of a moonless, starless night with dense fog, current autonomous systems can’t make sense of the environment without radiating some signal—whether it’s a laser pulse, radar or visible light beam—all of which we want to avoid. If it involves emitting a signal, it’s not invisible for the sake of this program.”

DARPA has turned to IR sensing for passive navigation. Since everything — animate and even inanimate objects — emits some thermal energy, the goal is to discover what information can be captured from even an extremely small amount of thermal radiation and then develop novel algorithms and passive sensors to transform that information into a 3D scene for navigation. Passive perception of terrain features is a vital requirement for military related unmanned autonomous vehicle operations, especially under electromagnetic signature management conditions.

The Invisible Headlights program aims to discover and quantify the available information in ambient thermal emissions, determine how much of that information is useful for building a 3D model of a scene, define the tradespace of sensor designs capable of gathering this information, develop new sensors capable of dramatically increased measurement diversity, and validate all of the above via testing in the field. This approach is potentially transformative because conventional infrared sensors fail to collect almost all available information from ambient thermal emissions. Invisible Headlights seeks to create superior sensors that capture more of this information via improved algorithms and increased measurement diversity.

“If we’re successful, the capability of Invisible Headlights could extend the environments and types of missions in which autonomous assets can operate – at night, underground, in the arctic, and in fog,” Altepeter said. “The fundamental understanding of what information is available in ambient thermal emissions could lead to advances in other areas, such as chemical sensing, multispectral vision systems, and other applications that exploit infrared light.”

@Rajesh Uppal@idstch
Previous New food technologies to enhance soldier perfomance for success in military operations.
Next Adressing the Super-EMP and other Electromagnetic Weapon threat through technologies and countermeasures

Artificial intelligence is being employed in a plethora of defense applications including novel weaponry development, …