The need for better radar in World War II drove the development of radio frequency control, and its miniaturization in subsequent decades revolutionized a host of military and consumer applications. The generation of accurate signal frequencies from a single reference oscillator called microwave frequency synthesis, brought about many advanced technologies now critical to the military, such as wireless communications, radar, electronic warfare, atomic sensors and precise timing.

However, absolute frequency (or color) of light from a laser is difficult to set with precision, and laser frequencies tend to drift. The development of the “optical frequency comb” garnered a Nobel Prize in 2005, and enabled the demonstration of the first optical frequency synthesizer. Self-referenced frequency combs generated from femtosecond pulses in highly-nonlinear fibers have led to optical synthesizers with record breaking stability and accuracy. These systems, analogous to their radio-frequency counterparts, allow light to be generated on demand at exact wavelengths with errors of less than 10-15 or one-part-per-quadrillion.

Scientists in the Emergent Photonics Lab (EPic Lab) at the University of Sussex have made a breakthrough to a crucial element of an atomic clock—devices which could reduce our reliance on satellite mapping in the future—using cutting-edge laser beam technology. Their development greatly improves the efficiency of the lancet (which in a traditional clock is responsible for counting), by 80% – something which scientists around the world have been racing to achieve.

For example, digital optical synthesizers on a chip could increase accuracy for optical chemical sensing by six orders of magnitude while reducing cost, size and power requirements by many orders of magnitude over current capabilities. These improvements would make it possible to detect adversary chemical production facilities with high sensitivity from much farther away than is possible today.

“The development of optical frequency synthesis has significantly enhanced our ability to accurately and precisely measure time and space,” said Gordon Keeler, the DARPA program manager leading DODOS. “However, our ability to leverage the technology has been limited. Through DODOS, we’re creating technologies that will enable broader deployment and unlock numerous applications. The goal is to shrink laboratory-grade capabilities down to the size of a sugar cube for use in applications like LIDAR, coherent communications, chemical sensing, and precision metrology.”

Optical frequency synthesizers – systems that output laser beams at precise and stable frequencies – have proven extremely valuable in a variety of scientific endeavors, including space exploration, gas sensing, control of quantum systems, and high-precision light detection and ranging (LIDAR). While they provide unprecedented performance, the use of optical frequency synthesizers has largely been limited to laboratory settings due to the cost, size, and power requirements of their components. To reduce these obstacles to widespread use, DARPA launched the Direct On-Chip Digital Optical Synthesizer (DODOS) program in 2014. Key to the program is the miniaturization of necessary components and their integration into a compact module, enabling broader deployment of the technology while unlocking new applications.

To accomplish its goals, DODOS is leveraging advances in microresonators – tiny structures that store light in microchips – to produce optical frequency combs in compact integrated packages. Frequency combs earn their name by converting a single-color input laser beam into a sequence of many additional colors that are evenly spaced and resemble a hair comb. With a sufficiently wide array of comb “teeth,” innovative techniques to eliminate noise become possible that make combs an attractive option for systems needing precise frequency references. 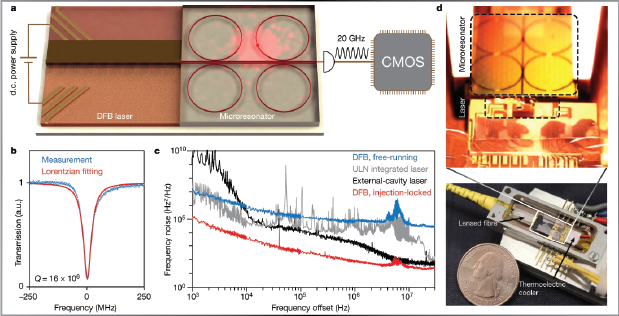 Until recently, creating frequency combs from microresonators was a complex affair that required sophisticated control schemes, dedicated circuitry, and oftentimes, an expert scientist to carefully observe and fine-tune the operation. This is primarily due to the sensitive properties of the microresonator, which needs the perfect amount of light at a special operating frequency – or color – to be provided by an input laser in order for the comb to turn on and even then, producing a coherent or stable comb state could not be guaranteed every time.

A new result published in Nature by a team of academic researchers led by University of California at Santa Barbara (UCSB) entirely changes this condition. By closely linking two microchips holding a laser and microresonator, the team was able to cause the two devices to strongly affect each other’s operation. In this simplified structure, the microresonator provides feedback that tunes the laser to the correct conditions needed to generate the comb, and to operate in the special “soliton” mode that features the broad array of comb “teeth” necessary for optical frequency synthesizers.

Critically important to future deployment, the research team’s demonstration is also much more convenient to operate. Because of careful choices in the design of the system, simply turning on the laser automatically starts the comb. The “turnkey” operation devised by the researchers dramatically simplifies the implementation of systems that need combs in order to perform special functions. By eliminating the specialized electronics and optics that are usually needed in between the devices, the simplified structure reduces scale, power, and cost requirements while making the combs robust to environmental and temperature disturbances.

“The UCSB team’s accomplishment could have broad reaching implications for a number of commercial and defense photonics applications – from navigation systems to optical clocks to coherent communications,” said Dr. Gordon Keeler, the DARPA program manager leading DODOS. “This work brings us one step closer to the creation of the next-generation of optical frequency control technology that isn’t restricted to a lab, but rather available for real-world use.”

This work builds on previous accomplishments the UCSB-led team made in collaboration with the National Institute of Standards and Technology (NIST) on the DODOS program in 2018 around the successful miniaturization of optical frequency synthesizer components. More information on this accomplishment is available here, https://www.darpa.mil/news-events/2018-04-25.

DODOS has driven the development of high Q microresonators, chip-scale modelocked lasers, efficient frequency doublers, and wideband passive elements that operate with low loss across an octave of spectrum.

The DODOS program is entering its final phase, during which performers will work to integrate the individual components together with electronics and fabricate a compact packaged device suitable for use in future military and commercial optical systems.

The paper published by the DODOS team in Nature details recent success achieved under the program by researchers from the National Institute of Standards and Technology (NIST) and partner institutions, including the University of California at Santa Barbara and the California Institute of Technology in Pasadena, California. Combining a pair of frequency combs, several miniature lasers, and other compact optoelectronic components, the researchers were able to replicate the capabilities of a tabletop-sized optical frequency synthesizer on four microchips–each only about 5 mm x 10 mm in size. The synthesizer can tune over 32 nm and delivers a frequency stability of 7 x 10-13 after one second of averaging, matching that of the input reference clock.

With further advances in materials and fabrication, the chips will likely be packaged together by one of NIST’s partner institutions, Papp said. The new optical synthesizer uses only 250 milliwatts (thousandths of a watt) of on-chip optical power—much less than a classic, full-size frequency comb.

Leveraging advances in semiconductor fabrication, researchers created the two miniaturized frequency combs by circulating laser light generated with single-color “pump” lasers around optical racetracks fabricated on silicon chips. Doing so correctly can produce many additional colors, yielding a spectrum that looks like a hair comb where each “tooth” is an individual color, or frequency. This is a significant departure from the tabletop versions, which use fiber optics, specialized mirrors, and large mechanical components built by hand to achieve a similar effect.

The synthesizer output is the programmable laser, whose lightwave oscillations serve as optical clock ticks traceable to the SI second, the international standard of time based on the microwave vibrations of the cesium atom. The output laser is guided by the two frequency combs, which provide synchronized links between microwave and optical frequencies. Each comb is created from light emitted by a separate, single-color “pump” laser. The NIST comb is 40 micrometers (millionths of a meter) in diameter. This comb has wide spacing between the teeth but can calibrate itself by spanning an octave—which, as in music, refers to the interval between two notes that are half or twice the frequency of each other. This feature calibrates the synthesizer.

The racetrack is a custom waveguide made of silicon nitride, which offers special properties that broaden the spectrum of light, concentrate the light in a small area to boost intensity, can be tuned through changes in geometry, and can be made like computer chips by lithographic techniques.

The Caltech comb is physically larger, about 100 times wider and made of fused silica. But this comb’s teeth are much finer and span a much narrower wavelength range—in the 1550 nanometer band used for telecommunications, the focus of the synthesizer demonstration. The distance between these teeth is set by a stable and accurate microwave reference clock.

The spacing between the teeth is a microwave frequency that can be measured and controlled relative to the SI second. Through a digital mathematical conversion process, this fine-toothed comb identifies stable, accurate optical frequencies within the wider spacing of the calibrated NIST comb.

When lined-up to the NIST comb, the Caltech comb creates a grid of known optical frequencies for the output laser to reference–or measure itself against. In combination, the frequency combs create a synchronized link between the microwave clock and the laser frequency. Thus, the two combs function as a frequency multiplier to convert the clock ticks from the microwave to the optical domain while maintaining accuracy and stability.

The research team demonstrated the system by synthesizing a range of optical frequencies in the telecom band and characterizing the performance with a separate frequency comb derived from the same clock. Researchers demonstrated the system architecture, verified the accuracy of the frequency synthesis, and confirmed that the synthesizer offered stable synchronization between the clock and the comb output.