Metallic glass , the next disruptive material for Future Space and Military applications, coming of Age

Rajesh Uppal March 24, 2017 Material Comments Off on Metallic glass , the next disruptive material for Future Space and Military applications, coming of Age 2,390 Views

Metallic glasses are new type of glass that are  extremely strong, hard, and resistant to wear and corrosion, all of which make them good potential candidates for engineering uses, including electronics casings, and medical uses such as surgical pins and stents. Metallic glass can withstand heavy impacts without deforming – even when pushed beyond its elastic limits, it doesn’t fracture, instead retaining most of its original strength. That makes it potentially useful in a variety of applications from drill bits to body armor for soldiers to meteor-resistant casings for satellites .

Most metals crystallize as they cool, arranging their atoms into a highly regular spatial pattern called a lattice. However when glass is cooled from a liquid to a solid, it does not crystallize. Under certain conditions, metal can also form as a glass with the atoms settling into a nearly random arrangement, like when metal is rapidly cooled to a solid state. Metallic glass or Bulk metal glasses (BMGs, for short) are formed when metal and metal alloys are subjected to extreme heat and then rapidly cooled – exciting their atoms into disorganized arrangements, and then freezing them there.

NASA has found that hardened bulk metallic glass foam may be very useful as a material for building future spacecraft for long-term space flight. The foams can also be used to build permanent structures on the Moon or Mars. Buildings and spacecraft fuselages made from bulk metallic glass foams can be extremely tough and light at the same time, thereby reducing costs while increasing the protection they provide to explorers.  as well as for potential shielding against micrometeorites and space debris impacts on spacecraft.

China is a major producer of metallic glasses, second only to the United States, according to mainland media reports.

In the journal Scientific Reports, researchers from USC; the University of California, San Diego; and Caltech announced the creation of the material, which was produced by heating a powdered iron composite up to exactly 630 degrees Centigrade (1166 degrees Faherenheit) and then rapidly cooling it. Tests have shown the material, which is called SAM2X5-630, is 588 times more resistant to damage than stainless steel and has twice the resistance of tungsten carbide ceramic used in body armour.

Professor Veronica Eliasson, an engineer at the University of Southern California, said the material’s unusual chemical structure is what makes it so hard yet also elastic. She said: ‘It has almost no internal structure, like glass, but you see tiny regions of crystallisation. ‘We have no idea why a small amount of crystalline regions in these bulk metallic glasses makes such a big difference under shock loading.’ While the new material is not yet transparent enough to be used to make super-hard glass screens, it could be used to create protective casing for mobile devices that would bounce when dropped.

The researchers, whose work is published in the journal Scientific Reports, tested the metallic glass using a gas gun that fired copper plates at the material at speeds between 1,118mph and 2,237mph.

Unlike window glass, metallic glass is not brittle. Many traditional metals are relatively easy to “deform,” or bend permanently out of shape, because their crystal lattices are riddled with defects. A metallic glass, in contrast, will spring back to its original shape much more readily.

Other tests showed it the material was capable of causing ball bearings to bounce when dropped on it.
Dr Andrea Hodge, principal investigator in the project, said: ‘We were able to observe the remarkable elastic limit of this material at high velocities, a behaviour which was not evident from conventional mechanical tests.’
Professor Eliasson added: ‘In particular, the fact that the new materials performed so well under shock loading was very encouraging and should lead to plenty of future research opportunities.’

The faults in crystals are what cause the material to break when it is stressed, and so metallic glasses can be far stronger — they have no faults between crystal grains. Because they lack crystal defects, iron-based metallic glasses are very efficient magnetic materials. And like window glass and plastic, metallic glass softens as it is heated, making it easy to mold into a final shape.

From an applications perspective, their high elasticity, hardness (resulting in resistance to scratching and wear), potential for high fracture toughness, and superior corrosion resistance are particularly important characteristics.

Currently the main applications are found in electric industries, where the materials are used in transformers to reduce waste heat production with their fine conductivity.

Metallic glass is best suited for high-end products and high value-added metal components such as consumer electronics frames and casings, or small functional metal parts. “Orthopaedic screws, cardiovascular stents, and precision surgical instruments are examples of medical products that could make good use of the properties and thermoplastic processability of metallic glasses, Microelectromechanical devices are another interesting area,” says William L. Johnson, “Of course, there’s always sports products such as golf-clubs.”

“Both Apple and Samsung are working hard to make phones waterproof,” Schroers said. “Our technology represents a big step toward this goal

One of the priorities at the laboratory is the creation of new soft magnetic materials, the magnetization of which can be reversed without major energy inputs. The use of these materials could greatly increase energy efficiency. It is a fact that the loss of energy in the magnetic cores of electric equipment such as engines/motors and transformers amounts to 3.5 percent of global energy consumption. The magnetic steels that are used in 95 percent of cases have approached the limit of their soft magnetic properties.

Considering the growing demand for electricity and the depletion of natural resources, researchers are working to create new soft magnetic materials with amorphous and nanocrystalline structures. The alloys they are creating are based on cheap metals such as iron (Fe), boron (B) and silicon (Si), which explains the high interest in their industrial application. Moreover, these alloys will be much stronger, harder and wear-resistant than their crystalline analogues.

These materials could be used to make parts for micromotors and electrical transformers, and protective coatings for equipment parts that operate in aggressive media.

The first commercial batch of bulk metallic glass will be produced in 2021.

This structure enables metallic glass to be extremely light yet incredibly strong and is ideal for building spacecraft. Space agencies, including NASA in the US, have long considered using the material in many areas, ranging from spacecraft body construction and shields to protect against space debris, to future structures on the moon or Mars. In a report released last year, Nasa’s Jet Propulsion Laboratory said that “bulk metallic glasses would be the highest performing material” in many space applications “typically doubling the predicted performance of titanium”.

Metallic glass also has major potential for military application, some researchers believe that it could be used for developing armour-piercing projectiles capable of punching through bulletproof vests, or anti-tank rockets.

Unlike most crystalline metal projectiles, which flatten into a mushroom shape upon impact, Johns Hopkins materials scientist Todd Hufnagel believes the sides of a metallic glass head will sheer away on impact, essentially sharpening the point and providing more effective penetration.

Researchers from the University of Bristol have used state-of-the-art computer simulation to test a theory from the 1950s that when atoms organise themselves into 3D pentagons they supress crystallisation. Dr Patrick Royall from the School of Chemistry, who led this research with colleague Dr Jade Taffs, said: “In order to manufacture these amorphous materials we need to find a way to stop them from forming crystals. “This is challenging — decades of research have resulted in a largest sample just 7cm in size. The key question — what is the most effective way of stopping crystallisation, remains unsolved.”

There are several ways in which amorphous metals can be produced, including extremely rapid cooling, physical vapor deposition, solid-state reaction, ion irradiation, and mechanical alloying.

Engineers at the University of California San Diego used a technique called spark-plasma sintering to create the new metallic glass. They did this by placing powdered iron into a graphite mold and then raising the pressure it is under to 1,000 atmospheres. They then zapped the powder with an electric current, heating it to 1166°F (630°C), causing it to bind together without ever becoming liquid. This forced the iron to form a glass-like structure rather than the highly organised cyrstalline structure seen in most metals.

To make a glass, the metal must harden before the crystal lattice has a chance to form. Scientists have created about a dozen metallic glasses in bulk form–bars, for example–by mixing four or five elements that possess atoms of varying sizes, typically lanthanum, magnesium, zirconium, palladium, iron, copper, and titanium. That makes it tougher for the mixture to form crystal lattices.

Researchers from the Harvard John A. Paulson School of Engineering and Applied Sciences (SEAS), Cambridge, Mass., in collaboration with colleagues from Duke and Yale universities, recently developed a method to predict which alloys might form a bulk metallic glass.

When metal alloys are melted, the atoms lose their ordered structure—although most will snap back to their rigid crystal structures when cooled. However, bulk metallic glasses, if cooled at certain rates, will retain the random amorphous structure even in the solid state. Yet some alloys have more options when it comes to their crystal structures. When these alloys are being cooled into solids, their atoms could crystallize in many different ways. “If a particular alloy composition exhibits many structurally different, stable or metastable crystal phases that have similar formation energies, these phases will compete against each other during solidification,” explains Vlassak. “Essentially, the liquid becomes so confused, it remains amorphous as it solidifies.”

However metallic glasses have long had a fatal flaw: they age too quickly. When exposed to external physical stresses, metallic glasses lost their incredible physical properties, becoming crisp and fragile. This severely limited the application of such material, especially in the space industry, where endurance and reliability are key concerns.

Wang Weihua of the academy’s Institute of Physics in Beijing, and his team researchers have found a new process to develop metallic glass free from defects like ageing.

According to the researchers, the quick ageing of the metallic glasses was caused by the “intrinsic non-uniformity of the glass structure”. In other words, the randomness of atom arrangement was not random enough, with orderly structures occurring sparsely here or there.

They found that if the metallic glasses are subjected to repeated cryonic “baths” in liquid nitrogen for several minutes allowed it to warm to room temperature, caused their atoms to be further randomized, and eliminating defects that would lead to the material’s internal instability. The authors said the new method was ideal for industrial adaptation and cheap mass production.

Traditional metal forming processes often require expensive machining stages from a starting block, so as to achieve the final product. This is inherently costly and results in the waste of a lot of material.

“Metallic-glass-based technology can therefore not only compete with traditional metal manufacturing processes, but may prove far more cost-effective. Fabricating small components from metallic glass is inherently easier than large components however, and there are significant challenges when scaling-up,” says William L. Johnson, the Mettler Professor of Materials Science at California Institute of Technology.

“I am convinced that metallic glass has potential to become a disruptive technology, potentially displacing traditional metal machining and forming methods and replacing current specialty metals such as stainless steel and titanium alloys. It remains to be seen how soon, and to what extent, that potential is realized,” says William L. Johnson.

@Rajesh Uppal@idstch
Previous US Army lays out technical strategy, S&T Campaigns and implementation plans for future land dominance
Next USAF developing C4ISR that is based on AI, Integrated, Joint, Multifunctional and Multidomain ( air, space and cyber ) 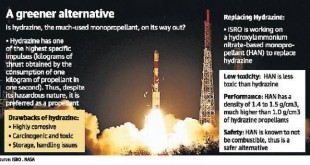