Uncertainties in materials and component manufacturing processes are a primary cause of cost escalation and delay during the development, testing and early production of defense systems. In addition, fielded military platforms may have unanticipated performance problems, despite large investment and extensive testing of their key components and subassemblies. These uncertainties and performance problems are often the result of the random variations and non-uniform scaling of manufacturing processes. These challenges, in turn, lead to counterproductive resistance to adoption of new, innovative manufacturing technologies that could offer better results.

DARPA has been investigating the possibilities of 3D printing since the late 1990s, keen to tackle ‘cost escalation’ and delay during the development, prototyping and testing of defense systems.

DARPA  launched  the Open Manufacturing program to lower the cost and speed the delivery of high-quality manufactured goods with predictable performance in 2014 . It aims to do so by creating a manufacturing framework that captures factory-floor and materials processing variability and integrates probabilistic computational tools, informatics systems and rapid qualification approaches. These newly developed concepts and approaches will be used to characterize and reduce the risk of new manufacturing technologies.

DARPA OM program seeks to develop an Integrated Computational Material Engineering framework that can accurately predict the properties of 3D printed metal components.  It seeks to solve this problem by building and demonstrating rapid qualification technologies that comprehensively capture, analyze and control variability in the manufacturing process to predict the properties of resulting products. Success could help unleash the potential time- and cost-saving benefits of advanced manufacturing methods for a broad range of defense and national security needs.

1. Development of probabilistic, physics-based process-property models to predict and guarantee that a manufactured product’s range of performance lies within design requirements.

2. Development of rapid qualification schema that employ statistical methods and probabilistic simulation tools for low-cost, high-confidence prediction of product performance. In the present day, rapid qualification is, “where we think we’re going to have a really big impact with the program,” says Maher. The qualification and validation of materials and processes is an important dimension for integrating 3D printing into production.

4. Establishment of military-service-affiliated Manufacturing Demonstration Facilities that: serve as repositories of focused manufacturing knowledge and infrastructure; independently demonstrate designs, manufacturing processes, process models and manufactured products; and curate and assess manufacturing models, qualification schema and material/processing properties data. These multi-user facilities are intended as a lasting, shared resource to provide the manufacturing community with greater access to the Open Manufacturing program and its research.

If successful, Open Manufacturing will reduce barriers to innovation in manufacturing, and expand the Defense manufacturing base by establishing methodologies for affordable, rapid, adaptable manufacturing with comprehensive design, simulation and processing tools and exposure to best practices. The resulting framework, through greater process understanding and control, would allow new manufacturing processes to be more readily transferred from the laboratory to the shop floor.

Uncertainties in materials and component manufacturing processes are a primary cause of cost escalation and delay during the development, testing and early production of defense systems. These challenges, in turn, lead to counterproductive resistance to adoption of new, innovative manufacturing technologies that could offer better results. Overcoming this shortcoming is necessary to enable reliable mass production of additively manufactured structures such as aircraft wings or other complex components of military systems, which must meet demanding specification requirements.

One of the four foundational areas in Open Manufacturing is Development of novel, rapid, robust manufacturing and fabrication processes that result in improved performance, reduced production times and more affordable manufacturing. Within this area, performers will attempt to demonstrate two specific technologies: metals additive manufacturing and the manufacturing of bonded composites structures.

Sigma Labs with their quality assurance software will play a role in increasing understanding and controlling build chamber metrology. The high temperatures reached inside a metal powder bed 3D printer present particular challenges to manufacturers and are also the focus of scientists working at national laboratories such NIST and Lawrence Livermore. The work has resulted in several breakthroughs in how to produce 3D printed metal parts faster, but also make them stronger.

With its swift advance into the final phase of the DARPA OM program, Sigma Labs has announced that it has officially achieved the quality assurance that the Defense Department is looking for when using 3D printed metal. After completing Phase I and II in 2014 and earlier in 2016 respectively. Through this award, we’ll have the opportunity to demonstrate how our PrintRite3D software can be a key enabler for developing quality assurance standards for metal [3D printed] aerospace components.”

“We look forward to working with Honeywell and its team to further demonstrate how our PrintRite3D technology enables rapid manufacturing processes such as laser-based 3D printing for precision metal components. Through this award, we’ll have the opportunity to demonstrate how our PrintRite3D software can be a key enabler for developing quality assurance standards for metal [3D printed] aerospace components,” said Mark Cola, Sigma Labs’ President and Chief Executive Officer.

PrintRite3D is a combination of one hardware module and two software modules for additive manufacturing quality assurance, and in process monitoring. When used together they collect and process data which users can analyse and inspect, in real-time, and implement corrections if necessary.

For high quality end use parts, metal 3D printing processes require in- situ monitoring. After fabrication, these parts are also inspected for defects such as high porosity, incorrect density, residual stress, cracking and warping. As a result manufacturers won’t know if the part meets its design specification until the printing process has ceased.

PrintRite3D hardware includes three individual modules. The Sensorpak, a hardware module which includes a set of off-axis and on-axis in-process sensors, which collects real-time data on each individual layer during 3D printing. The data that Sensorpak collects is then fed into two software modules – INSPECT and CONTOUR.

INSPECT uses the sensor data to establishes in-process metrics for each metal or alloy during the process, providing users with a part quality report. CONTOUR is a layer-by-layer geometry measurement tool. It provides users with the ability to compare the part in-printing with the original digital CAD model during manufacture.

This recent study, shows that PrintRite3D, while not specifically aimed at defence, manages to solve, or at least lessen, the cost and increase the rate of first time success when producing high value end use parts. The paper demonstrates how PrintRite3D was able to detect and eliminate potential early-stage problems in the 3D printing process. Using rocket nozzles as a test part, the study the 3D printed components achieve target “porosity, geometric accuracy, and mechanical strength” when PrintRite3D is applied.

Commenting on the results of the study John Rice, CEO of Sigma Labs, he said, “Obtaining this third-party validation of the value of PrintRite3D in metal additive manufacturing is one of the company’s most important milestones.” Adding, “Our six-year research with Honeywell and the DARPA Open Manufacturing Program specifically demonstrates that the analysis of the Thermal Emission Density (TED) metric made possible by our technology can play a critical role in ensuring quality in industrial additive manufacturing of metal parts.”

“The [RLCAM effort] is with Honeywell and they’re working on Direct Metal Laser Sintering (DMLS). In particular the material they’re using is Inconel 718 plus,” says Maher. Inconel 718 is a nickel-base super alloy; the metal performs well in extreme environments where high temperatures are present and is resistant to corrosion. These characteristics make it a strong candidate for use in aircraft engines. Maher explains, “We have got a framework together using physics based models. A network of physics based models that model everything from the powder bed to the melt pool, to the laser. We’ve run a series of experiments to calibrate those models so that we understand how these parameters effect the properties and microstructures that are developed within the metal and include some of the environment conditions or starting conditions like the powder size or powder chemistries.” In particular the agency works closely with Lawrence Livermore National Labs.

The second program uses Electron Beam Additive Manufacturing (EBAM), DARPA are working with a wire-based technique rather than the powder bed method used by Arcam. 3D printing metal using wire fed methods enables much larger components to be produced and the process used in the tiFAB project is similar to the Rapid Plasma Deposition (RPD). RPD was developed by Norsk Titanium, who recently announced a $1 billion project in Plattsburgh, New York.

Maher explains how DARPA’s tiFAB effort works, “That’s with Boeing and we’re working with Titanium 6AL-4V (Ti-6Al-4V).” The 3D printing process is handled by Sciaky of Chicago who acts as a sub-contractor for Boeing. “When you look at DMLS you’re probably laying down about a quarter pound per hour, the Sciaky [EBAM] machine is laying down about 20 lbs. per hour,” says Maher.

It was recently reported that one Boeing’s MV-22B Osprey tiltrotors, “Made its first flight incorporating a flight-critical component built using 3D-printing techniques.” According to Boeing, “The V-22 Osprey is a joint service multirole combat aircraft utilizing tiltrotor technology to combine the vertical performance of a helicopter with the speed and range of a fixed-wing aircraft. 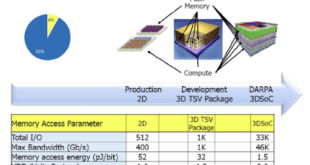