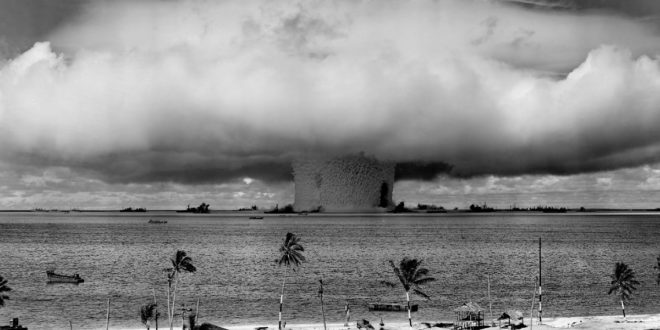 AI is projected to create 11 trillion dollars of economic value in the next decade.  This is driving vigorous AI race among countries led by US, China, Russia who are spending billions of dollars to assume leadership in its development and utilization for economic and military advantage.

In Defense and Security AI is emerging as biggest multiplier and being embedded in every military technology, platform, system, and Network from Soldier to entire Military enterprise and making them smart and Intelligent. For example, it is enabling smart sensors to smart ships, cognitive radio and cognitive electronic warfare systems, autonomous land, air and sea systems to conduct military missions.

Advances in machine learning and autonomy could unlock new and varied possibilities for a wide array of nuclear force-related capabilities, ranging from early warning to command and control and weapon delivery.  This development could have both stabilizing and destabilizing effects on strategic stability, depending on the country and the regional context. For example, if a dominant power were to use AI to enhance its nuclear force structure, this could further compromise the deterrence capability of a weaker country, weakening strategic stability. Alternatively, if the weaker power is able to harness AI to improve its own nuclear forces, then it may be able to redress existing asymmetries, thereby enhancing mutual vulnerability and strategic stability.

Autonomous systems are different in a more fundamental way. Where nuclear warheads are a singular type of weaponry, AI is an enabling technology that can be used in many types of weapons and support systems. Even a nuclear missile can be outfitted with an AI system that would give it the ability to search out and destroy a specific target.

Another AI potential is prediction such as predicting when weapons systems will fail due to maintenance issues. Military officials are exploring whether they can use AI to help predict the launch of a nuclear missile. AI programs could analyze huge amounts of information, including satellite imagery, to find signs of preparations for a missile launch.

A U.S. diplomat focusing on disarmament said Thursday that China is “looking at” developing naval and aerial autonomous nuclear weapons systems, warning any such development could disrupt strategic stability. Ambassador Robert Wood, the U.S. envoy to the Conference on Disarmament in Geneva, said China hasn’t developed or been able to weaponize the technology yet. But his comments suggested that China is interested in such so-called “exotic nukes” like nuclear-powered underwater drones and nuclear-powered cruise missiles being developed by Russia.

“This is something they are looking at,” Wood said. “If they were to develop … these kinds of weapons and aerial systems, this has the potential to change the strategic stability environment in a dynamic way.” The United States doesn’t have either type of system. “This is not where China was 10 years ago,” Wood added, noting the “upward trajectory” that China has been on in the quantity and quality of its weapons systems. “They’re pursuing weapons similar to some of the nuclear-powered delivery systems that the Russians have been pursuing.”

Russia has said its development of such weaponry is aimed at countering the United States’ defenses against ballistic missiles. Moscow has expressed concern that such defenses could eventually undermine the viability of its strategic offensive nuclear forces, although Washington insists that its defensive system is designed to protect the U.S. homeland from North Korean missiles, not Russia’s or China’s.

Wood’s comments are part of a broader push by the United States to draw China into strategic talks. He decried a lack of transparency from Beijing and a shortage of U.S.-China communication along the lines of that between the U.S. and Russia — and the former Soviet Union — for decades. “Until China sits down with the United States bilaterally, the risk of a devastating arms race will continue to increase — and that’s in the interest of no one,” he said.