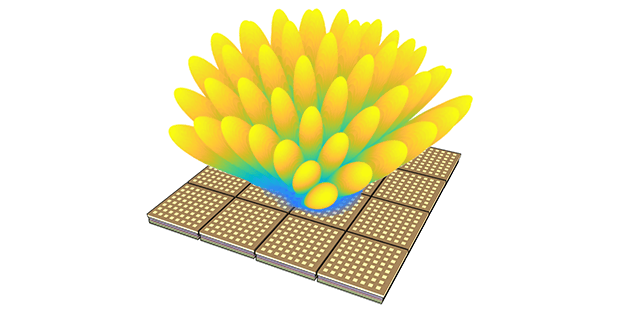 The demands on Wireless communications and radar systems have been continuingly increasing as the need for accuracy, efficiency, and more advanced metrics become increasingly important.  Many new applications will only be possible with antennas that consume less power in a lower profile than traditional mechanically steered dish antennas. These requirements are in addition to the desire to reposition quickly to a new threat or user, transmit multiple data streams, and operate over longer lifetimes at aggressive cost targets. In some applications, there is a need to null an incoming blocking signal and have a low probability of intercept.

As a result, engineers have pushed toward advanced antenna architecture such as phased array antenna technology to improve these features and add new functionality. What makes them unique is their ability to change the shape and direction of the radiation pattern without physically moving the antennas. A phased array antenna is an array antenna whose single radiators can be fed with different phase shifts. As a result, the common antenna pattern can be steered electronically. Phased arrays were invented for use in military radar systems, to steer a beam of radio waves quickly across the sky to detect planes and missiles. Phased array antennas are electrically steered and offer numerous benefits compared to traditional mechanically steered antenna such as low profile/less volume, improved long-term reliability, fast steering, and multiple beams. With these benefits, the industry is seeing adoption in military applications, satellite communications (satcom), and 5G telecommunications including connected automobiles.

A phased array antenna is a collection of antenna elements assembled together such that the power from the transmitter is fed to the antennas through devices called phase shifters, controlled by a computer system, which can alter the phase electronically, thus steering the beam of radio waves to a different direction. The result is that each antenna in the array has an independent phase and amplitude setting to form the desired radiation pattern. This phase shift will introduce interference between the signals transmitted.  The radio frequency current from the transmitter is fed to the individual antennas with the correct phase relationship so that the radio waves from the separate antennas add together to increase the radiation in a desired direction, while cancelling to suppress radiation in undesired directions.  The direction of radiation can be manipulated by changing the phase of the signal fed into each antenna element.

Electromagnetic (EM) phased arrays contain many antenna elements that transmit and receive EM signals. These signals are combined in such a way as to manipulate the spatial directions of the signals, such as to transmit a signal in a specific direction or receive only those signals of interest from the desired direction while ignoring signals emanating from other directions. The fundamental math operation behind phased arrays is a complex multiplication of rows of coefficients, one per beam, by every array element. The beamforming operation is followed by information extraction and processing.

In current digital phased arrays, every element is digitized, leading to an explosion of data requiring billions to trillions of complex operations per second. Currently, racks of high-powered processors are used in many stages of processing to handle the data processing challenge. DARPA launched TRIAD program that aims to create a streamlined processing approach to manage the beam forming and information processing directly within the array to significantly cut down on processing time and cost.

Some of the ideas DARPA is pursuing in this program include: self-aware array operations through self-learning (potentially useful for calibration), new models for adaptive array processing through reinforcement learning, improvements to interferometric scanning, in-line
target detection assisted by ML-based adaptation, use of ML to assist in elemental tuning for beamshaping (e.g., implementation of super-resolution to create narrower beams for areas of specific interest), beam obfuscation through elemental parameter scrambling, various forms of compressed sensing for data reduction assisted through ML, multiple and adaptive beam steering, cross-polar correlative analysis, unconventional array technologies with non-planar and uneven element separation, intelligent resolution of spectrum contention, and so on. Proposers are encouraged to think of other such use cases of an ML-enabled digital array.

TRIAD will require some hardware design, but this is not the focus of the program. As such, TRIAD is interested in using commercial
processors that have shown their value in accelerating ML tasks, such as GPUs, FPGAs, and new tensor or inference processing units (TPU or IPU). TRIAD is not expecting new innovations in array hardware or new silicon, but rather how the current commercial technology can be brought to work for and inform the use of digital arrays.

TRIAD’s integrated approach bridges arrays, machine learning, and the underlying hardware. Together, TRIAD has three technical challenges, all to be addressed in submitted proposals: The basic operations of beam steering and forming can be expressed as a tensor operation as described in Figure 1a. This figure assumes an array of antenna elements e1 through en arranged in some type of three-dimensional configuration. Take for example the following general explanation of electronic beam forming and steering for signal reception. An incoming signal impacts each element of the array at a different time and with a different amplitude, represented in phasor notation as a complex number. The phasor at each element is then amplitude weighted and phase shifted through multiplication by a complex weight. This operation is applied to each element to align the amplitude and phase of the signal at each antenna element. The products of the element phasors and their complex weights are then summed to produce the beam forming result to receive a signal from a given direction. For transmission, the opposite operation is carried out – namely a desired signal is multiplied by a series of complex weights with the resulting products applied to each element to transmit a signal in a desired direction. To accommodate multiple beams simultaneously, a separate set of complex weights is applied to the array elements for each beam. As shown in Figure 1a, the receive (and transmit) operation is a tensor operation that multiplies a weight matrix of complex
numbers by a vector of complex numbers representing the signal at each array element.

Despite the basic yet highly general electronic beamforming model of Figure 1a, the mathematics behind it turn out to be a special case of machine learning (ML) described by feedforward and recurrent neural networks. Figure 1b shows such a generalization towards machine learning, where now the functions of beam forming and steering are absorbed into a more generalized tensor math hierarchy. For simplicity, only one layer of such a machine learning network (or graph) is shown, but clearly the architecture can propagate to several layers. With multiple layers, such a model can be generalized for many applications beyond basic beamforming (as described above) to include transformative array operations (e.g., “scanless” quasi optical array operations) and higher-level operations such as target detection and tracking. More specifically, such an architecture should facilitate, through innovative computer programs, a variety of array operations heretofore not readily realizable.

2. Abstraction of the algorithms. This technical challenge calls for expressing the algorithms of interest, in a hardware-independent manner, through the use of programmable libraries of array-specific tensor operators. Programmatic approaches should use frameworks such
as PyTorch, TensorFlow, Julia, and other high-level languages to create reusable and shareable models with computational graphs. Graphical interfaces will also be welcomed to achieve array tensor operations, such as through extensions to the GNU Radio Companion, to represent array operations. Abstraction will have to apply appropriate compilers to transform high-level programs to operational machine code.

3. Underlying architecture. Here the tensor computations and associated machine learning must be tightly coupled to the underlying RF array element electronics where beamforming and/or multilayer neural network (or other ML architectures) are executed as a computing ensemble. This hardware concept can be demonstrated with array apertures on hand or through the assembly of a simple demonstration array composed of readily available commercial off-the-shelf (COTS) parts, such as by linking RF components directly to GPUs. Relying on the math processing in an external cabinet will not be acceptable (except for purposes of initial proof of concept demonstration). The
underlying architecture must also address data flows within the RF aperture / computing ensemble, perhaps through the use of innovative protocols that direct data packets among the computational elements. It should be emphasized that TRIAD is NOT a hardware development program, and that on-hand hardware is only to be applied to demonstrate an architectural concept, not pursuits of exquisite performance or manufacturability.