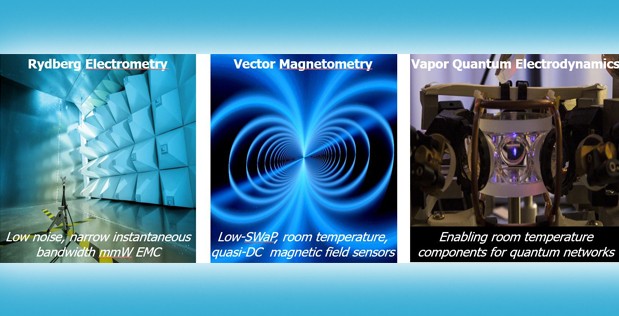 We are in midst of the second quantum revolution moving from merely computing quantum properties of systems to exploiting them. Researchers are developing new capabilities in secure communication, ultra-sensitive and high signal-to-noise physical sensing of the environment and Quantum Information Science (QIS).

Yet many scientists believe that quantum will enjoy its first real commercial success in sensing. That’s because sensing can take advantage of the very characteristic that makes building a quantum computer so difficult: the extraordinary sensitivity of quantum states to the environment.

Quantum sensors are measuring device that uses some non-intuitive properties of nature to measure things like time, magnetic fields, gravity, or acceleration.  Quantum sensors take advantage of quantum correlations, such as states in a quantum superposition or entanglement, for better sensitivity and resolution than can be obtained by classical systems. We can make quantum sensors to measure acceleration, gravity, rotation, time, pressure, temperature and electric and magnetic fields.

Some quantum sensors use atoms to sense changes. This works because the atoms can be controlled and measured precisely. Atoms are constants of nature: they are not subject to manufacturing variabilities, defects, impurities, or aging, making them ideal for precision measurements.

In quantum physics, particles such as atoms can act like waves, exploring extended areas of space. They can be put in two places or two states at once. Because this quantum superposition is highly sensitive to the environment, it can be used as the basis for precise sensors. For example, in an atom interferometer atoms are trapped as a tiny cloud. The cloud is then released and falls, with precisely-timed laser pulses used to control it as it goes. The atoms behave as waves, which interfere with one another like ripples crossing on the surface of water. The pattern made by this interference depends on what is influencing them as they go. If that’s simply falling under gravity, it allows for very precise gravity sensing.

This is most evident in atomic clocks that are accurate to a fraction of a second over the age of the universe. This has become possible thanks to continuing advances in components such as lasers and cooling systems that allow researchers and engineers to manipulate the quantum states of atoms and measure how they are affected by their environment. This process has enabled the world’s most accurate atomic clocks with unprecedented levels of timing precision.

However, such high-precision quantum devices typically require laser-cooled and trapped atoms that are kept at microKelvin temperatures to mitigate thermal noise effects, necessitating laboratory-scale expansive setups, says DARPA. Quantum research in both information science and sensing shows great promise for enabling a host of new defense applications. A major hindrance to transitioning breakthroughs from the laboratory to practical use, however, is the extensive equipment needed to cool and trap atoms to exploit their quantum features. The apparatuses needed to cool the atoms can fill up a laboratory, making laboratory atomic clocks impractical for field use.

To address this challenge, DARPA launched its Science of Atomic Vapors for New Technologies (SAVaNT) program in Sep 2020. The program is focused on warm atomic vapors as opposed to cold-atom technology, which requires cooling atoms to very low temperatures with lasers to reduce thermal noise.  The warm atomic vapors approach, on the other hand, doesn’t require complex laser-cooling and allows for a larger number of atoms, boosting the signal.

Vapor-based technologies, on the other hand, operate at or near room temperature (RT) without complex laser cooling and trapping, but still offer the advantages derived from the pristine nature of atoms. The challenge, however, is that thermal environment effects – even at room temperature – significantly mitigate how long the quantum effects, or coherence, can last.

Our ability to manipulate atoms with light has advanced tremendously over the past couple of decades, including powerful quantum methods, such as Electromagnetically Induced Transparency (EIT) and Spin Exchange Relaxation Free (SERF) magnetometry. Such techniques are enhanced with a bigger and richer toolbox, including more stable and more compact lasers and advanced vapor cell technologies.

These combined scientific and technological developments have enabled novel uses of atomic vapors, from Rydberg electrometry and SERF magnetometry to novel components for quantum information systems. Recent advances in strategies for addressing the performance limitations of current methods and novel theoretical ideas on the uses for atomic vapors indicate the possibility for significant breakthroughs in vapor-based devices.

SAVaNT seeks to advance the performance of room-temperature atomic vapors to enable future opportunities for unprecedented combinations of low size, weight, and power (SWaP) with performance across multiple Department of Defense domains.

The principal performance limitations of atomic vapors are directly related to their RT operation and decoherence due to thermal and other effects. Typically, a measurement procedure has three steps: (1) state preparation of the atoms in the vapor, (2) field-sensor interaction, and (3) readout.

The sensitivity of the measurement directly depends on the coherence time of the prepared state. Coherence time is limited by various thermal effects: atom-atom collisions and collisions of atoms with vapor-cell walls, Doppler shift of the atomic frequency due to the atom motion relative to the laser probe, and transit time broadening caused by the limited interaction time of atoms with probe fields due to their motion in-and-out of the field.

These and other effects have prevented atomic vapor-based technologies from reaching their full performance potential. The Science of Atomic Vapors for New Technologies (SAVaNT) program aims to develop techniques to mitigate main decoherence mechanisms in order to realize the full potential of the atomic vapor based technologies.

SAVaNT is a four-year program in two phases and three technical areas. The first phase focuses on demonstrating the physics of Rydberg electrometry; vector magnetometry; and vapor quantum electrodynamics.

Technical Area 1 seeks to develop a Rydberg sensor – which uses atoms to sense electric fields – that would provide ultra-narrow bandwidth, high-sensitivity electric field detection for millimeter waves. Rydberg electrometry uses atoms to sense electric fields, and has notable advantages over antennas, such as extremely large operational bandwidth accessible with one device; potential for high sensitivity; and self-calibration. The focus is on improving sensitivity and instantaneous bandwidth of Rydberg electrometry.

Rydberg electrometry is a relatively new technique that utilizes atoms to sense electric fields. Although the method still has much room for improvement, it has notable advantages over antennas, including extremely large operational bandwidth (MHz-THz) accessible with a single
device, potential for high sensitivity, and SI-traceability that enables self-calibration. In addition, for some EMC and communications applications, the combination of high sensitivity and narrow instantaneous bandwidth is a major advantage.

In the Rydberg sensor, atoms are optically prepared in a state that is particularly sensitive to an incident electric field. The readout is
performed optically as well. Rydberg sensor sensitivity can, in principle, be orders of magnitude better than what is possible with conductive methods that are limited by Johnson noise. Its sensitivity is limited by the atom coherence time, with the fundamental limit determined by the quantum projection noise. Current Rydberg electric field sensors are generally less sensitive than antennas due to various thermal
effects such as atom collisions, Doppler broadening, and black-body effects as well as laser shot noise, among others. The instantaneous bandwidth of Rydberg electrometry can be very narrow and is fundamentally limited by the atomic linewidth allowing, in principle, for ultranarrow fractional bandwidth.

The primary focus in this TA is on improving sensitivity and instantaneous bandwidth of Rydberg electrometry with the metrics and goals. In Phase 2, those should be demonstrated in an integrated physics package. Of particular interest is the 10-100 GHz part of the spectrum.

A recent study proposed that CQED might be possible with warm atomic vapors combined with high-Q nanophotonic cavities (vQED). In contrast to typical CQED, vQED utilizes room temperature, strongly interacting atomic vapor–light systems that do not require cryogenics or complex optical systems and are, thus, much more scalable. While the atom-light coupling demonstrated in vapors is currently very small, the recent study suggests that an improvement by several orders of magnitude is feasible.

The Defense Advanced Research Projects Agency (DARPA) has announced its selection of eight industry and university research teams to support the Science of Atomic Vapors for New Technologies (SAVaNT) program that kicked off in Sep 2021:

The SaVANT research teams will lay the foundations for new technologies that address important DOD needs and technology gaps, including applications that require low size, weight and power (SWaP), high sensitivity electric field and magnetic field measurements, as well as quantum information science applications that require strong atom-light coupling. The common scientific challenge across all technical areas of the program is to improve coherence of atomic vapors at room temperature.

Officials of the U.S. Defense Advanced Research Projects Agency (DARPA) in Arlington, Va., announced a $3.6 million contract to ColdQuanta in April 2021 for the Science of Atomic Vapors for New Technologies (SAVaNT) project.

For the DARPA SAVaNT program, ColdQuanta experts will investigate techniques to mitigate main decoherence mechanisms to realize the full potential of atomic vapor-based technologies. ColdQuanta will pursue new technologies for important military needs like low size, weight and power (SWaP); high-sensitivity electric and magnetic field measurements; and application that require scalable room-temperature quantum memories and interfaces. One challenge is to improve atomic coherence in vapors, and will depend on dominant decoherence mechanisms.