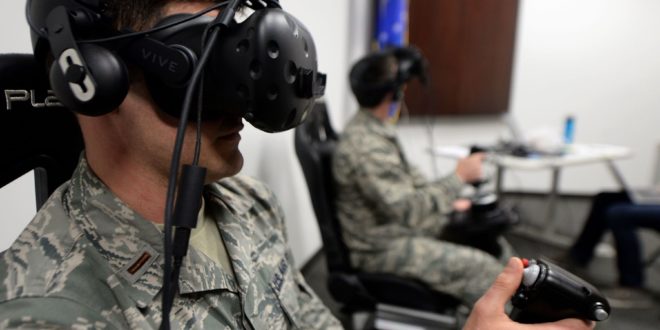 Artificial Intelligence in the Military Training

Artificial intelligence (AI) is a key driver for Industry 4.0, with the potential to disrupt numerous business verticals. The technology’s ability to perform human-like cognitive functions such as learning, reasoning, problem-solving, planning, and self-correction, and to make decisions based on simulations drives its large-scale adoption.

AI enables the creation of a cognitive system that has the capability to process, analyze, and scale data, and communicate seamlessly with interconnected machines. Intelligence allows machines to independently make decisions without human intervention. A learning capability with algorithms further enhances AI by empowering machines to extract lessons from their own past experiences, just like humans.

The behavior of entities in such simulations is based on artificial intelligence and machine learning algorithms that are able to classify objects in complex images, resolve intricate puzzles, and forecast fuzzy situations. Such simulations are better tailored to the needs of users: decision-makers, trainees, and instructors. Moreover, AIMS enables an easier, automatic scenario development process for scenario developers.

AI will use machine learning to create custom simulated training scenarios for soldiers that are more dynamic and responsive than what is possible in the real world. Data collected from many iterations of these simulations will be able to provide analytics that the military can use to then refine battlefield tactics for real-life operations and in turn be tested again in a virtual reality trainer. This feedback loop of information will offer new ways to refine strategies and find best practices in a way never before possible. Programs will identify patterns in a soldier’s actions and employ machine learning to adapt the behavior of opposing non-player characters in real time. Currently, the synthetic training simulations in use rely solely on input from subject matter experts to program the actions of the virtual opponents, but that is soon to change.

In late June, the Global Times tabloid in China published an article stating the PLA  Air Force had utilized AI for simulated opponents in aerial combat training for Chinese fighter pilots. It was being used to “hone their decision-making and combat skills against fast-calculating computers,” according to the article, and Fang Guoyu, the group leader of a PLA AF aviation brigade, was “shot down” more than once during mock aerial battles in a simulator. Fang noted, “At first, it was not difficult to win against the AI. But by studying data, each engagement became a chance for it to improve.”

It was then able to best its human opponents on numerous occasions. This news was based upon an article in the PLA  Daily, which said the training iterations took place in the Central Theater Command. Du Jianfeng, commander of the PLA  AF brigade, said, “The AI has shown adept flight control skills and errorless tactical decisions, making it a valuable opponent to hone our capabilities.” He said the brigade had been integrating simulated and AI-assisted training in daily training in “recent years”.

China is not the only country exploring such technology. In August 2020, the US Defense Advanced Research Projects Agency released results of its Alpha Dog fight Trials, where a simulated F-16V fighter with an AI-driven “pilot” was undefeated in five rounds of mock one-on-one air combat against a real US Air Force fighter. The US has since conducted even more advanced demonstrations such as its Air Combat Evolution, and it hopes to integrate the technology into a real full-size aircraft by 2023.

In the even longer term, the military hopes to expand the application of machine learning beyond utilization as a mere training tool. It plans to integrate machines with human warfighters in the form of artificial intelligence that can predict enemy action based on historical data and a current set of circumstances. This integration will augment troops’ decision-making at every level and provide the soldier real-time analytics with the statistically optimal best course of action.

The article went on to quote unnamed observers as saying, “In addition to training pilots efficiently, AI is expected to be an integral part of China ‘s future warplanes that would assist pilots with their combat decisions.” While the PLAAF is not yet integrating AI into combat aircraft, that could happen in the future on aircraft like the J-20 stealth fighter. The technology can assist pilots by calculating the best tactical options for a pilot, gleaning big-picture data from the whole battlefield, and making decisions at a much faster speed than what a human brain can.