Increasing energy demand, environmental issues and limited availability of fossil fuels are demanding the research on sustainable and renewable energy resources. The sun is ultimate source to accomplish clean energy demand and photovoltaics, also known as solar PV, have been growing exponentially to harness it.

Solar radiation often called a solar resource or just sunlight is a general term for the electromagnetic radiation emitted by the sun. The Earth is constantly receiving a tremendous amount of energy from the Sun, to the tune of 173,000 terrawatts. Clouds, particles in the atmosphere, and reflective surfaces like snow-covered mountains immediately reflect 30 percent of that energy out into space. The rest of it ends up warming the land, oceans, clouds, atmosphere, and everything else on the planet.

Solar radiation can be captured and turned into useful forms of energy, such as heat and electricity, using a variety of technologies. However, the technical feasibility and economical operation of these technologies at a specific location depends on the available solar resource.

Every location on Earth receives sunlight at least part of the year. The amount of solar radiation that reaches any one spot on the Earth’s surface varies according to: Geographic location, Time of day, Season, Local landscape, and Local weather.

Energy released from the Sun is emitted as shortwave light and ultraviolet energy. When it reaches the Earth, some is reflected back to space by clouds, some is absorbed by the atmosphere, and some is absorbed at the Earth’s surface. Sunlight that reaches Earth’s surface and atmosphere is either absorbed or reflected. Absorbed energy gets re-radiated the in the form of infrared, also known as longwave radiation. Infrared radiation is invisible to our eyes, but we feel it as heat. Earth sends out about as much energy as it receives. That’s why the planet emits a truly mind-blowing amount of energy as infrared radiation.

Some of the heat re-radiated by Earth’s surface and atmosphere is lost back to space. The absorption of infrared radiation trying to escape from the Earth back to space is particularly important to the global energy balance. Energy absorption by the atmosphere stores more energy near its surface than it would if there was no atmosphere.

“It’s a sort of light,” Assawaworrarit says. The infrared radiation that glows from the warm Earth (or anything else) has wavelengths that are too long for eyes to see, but it does carry energy. In fact, more than half of the total amount of solar energy that hits the Earth goes through this process, eventually returning to space.

Stanford engineers invent a solar panel that generates electricity at night, reported in May 2022

Solar panels are an excellent alternative to more traditional energy sources, but they come with a caveat: they can only be used during the day. That is, until now. Sid Assawaworrarit, an electrical engineer and PhD candidate at Stanford University, is leading the effort to make ordinary solar panels functional at night.

Researchers at Stanford modified commercially available solar panels to generate a small amount of electricity at night by exploiting a process known as radiative cooling, which relies on, no lie, the frigid vacuum of space. The research was published in early April in Applied Letters in Physics. While the modified panels generate a tiny amount of energy compared with what a modern solar panel does during the day, that energy could still be useful, especially at night when energy demand is much lower, the researchers said.

Assaworrarit has been successful so far. He and his colleagues have created a device that helps regular solar panels generate electricity using the fluctuating temperature of ambient air. As it turns out, solar panels can kind of work in reverse; solar panels emit infrared radiation even in the absence of light. This takes the form of protons carrying heat away from the solar panel via wavelengths invisible to the human eye. On a clear day (when there aren’t any clouds in the sky to reflect infrared light back toward Earth) this heat transfer creates a temperature difference of a few degrees, which is the secret sauce to Assaworrarit’s device.

Assaworrarit’s team isn’t the first to use a thermoelectric generator to capture heat from the night, but their approach looks promising when it comes to using solar panels that already exist for daytime use. By using an aluminum plate to reduce the amount of heat that could escape from the edges of their solar panels, the team was able to multiply their technology’s generated energy nearly ten times.

Night-effective solar panels carry a significant amount of potential. Scientists who use solar-powered equipment, like meteorologists and wildlife researchers, could benefit from more reliable power sources and lighter backup battery loads. Those who rely on solar power and other off-grid solutions for daily life—i.e. around one billion people globally—could also benefit from panels capable of providing a more consistent stream of electricity.

Major infrared breakthrough could lead to solar power at night, reported in May 2022

The sun’s enormous energy may soon be harnessed in the dark of night following a significant advance in thermal capture technology.

Solar radiation heats the earth’s crust significantly during daylight hours, but that energy is lost into the coldness of space when the sun goes down.

Now, researchers within the School of Photovoltaic and Renewable Energy Engineering at UNSW Sydney have successfully tested a device capable of converting infrared heat into electrical power.

The team, including members of the ARC Centre of Excellence in Exciton Science, used a power-generation device called a ‘thermo-radiative diode’, which is similar to the technology in night-vision goggles.

Exciton Science Associate Investigator Nicholas Ekins-Daukes, the leader of the research team, said: “In the late 18th and early 19th century it was discovered that the efficiency of steam engines depended on the temperature difference across the engine, and the field of thermodynamics was born.

“The same principles apply to solar power — the sun provides the hot source and a relatively cool solar panel on the Earth’s surface provides a cold absorber. This allows electricity to be produced.

“However, when we think about the infrared emission from the Earth into outer space, it is now the Earth that is the comparatively warm body, with the vast void of space being extremely cold.

“By the same principles of thermodynamics, it is possible to generate electricity from this temperature difference too: the emission of infrared light into space.”

Norwegian researcher Rune Strandberg first explored the theoretical possibility of such a device, and researchers at Stanford University are investigating alternative approaches to capturing thermal energy at night.

The amount of energy produced through this new test is small (roughly equivalent to 0.001% of a solar cell), but the proof of concept is significant.

“We usually think of the emission of light as something that consumes power, but in the mid-infrared, where we are all glowing with radiant energy, we have shown that it is possible to extract electrical power,” Nicholas said.

“We do not yet have the miracle material that will make the thermoradiative diode an everyday reality, but we made a proof of principle and are eager to see how much we can improve on this result in the coming years.”

The team are now excited to move to the next research phase in creating and refining their own devices to harness the power of the night, and welcome potential industry partners. 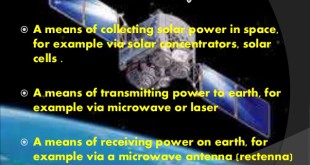 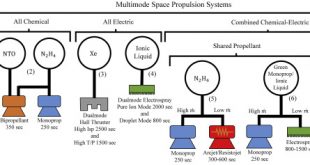 Most spacecraft propulsion concepts can be classified into two categories: chemical and electric. Chemical propulsion …