Unmanned Aerial Systems are gaining more importance every single day. Unmanned Aircraft Systems (UAS) are used for both defensive and offensive purposes. Different sizes and capabilities of UAS support a variety of different applications. Improved networking capabilities have enlarged the boundaries of UAS operations. Nations are working on more complex and more effective UAS in order to accomplish missions that are very difficult, or even impossible for manned aircraft.

Designers of unmanned vehicles are using a variety of electro-optical and radar sensors to provide unprecedented reconnaissance and surveillance capabilities for deployed military forces.Electronic Warfare missions are often dangerous and risky. Mounting Electronic Warfare equipment on a UAS and using it to conduct the EW mission is the most rational solution, since it does not endanger human life. Radars, on the other hand, canbe designed to rapidly scan large areas and they are less affected by weather, smoke. and dust. Without
crossing international borders, long-range standoffsurveillance radars, such as the Joint Surveillance and Target Attack Radar System
[Joint STARS), can provide rapid surveillance of large areas of foreign territory.

Modem RF systems for DoD applications are facing two major design challenges: mission expansion with constrained SWaP and spectrum density. The first challenge has led to a substantial push in so-called converged systems; that is, RF systems that can perform a plurality of functions (radar, EW, communications) with a single set of reconfigurable hardware. Programs such as AFRL’s REMAR (Reconfigurable
Electronics for Multifunction Agile RF) and DARPA’s CONCERTO (Converged Collaborative Elements for RF Task Operations) seek to address this collapse of mission functions into a single RF system. The increasing overlap of technology requirements of RF functions such as radar, EW, and communications combined with impressive research progress in the capability of RF components, analog-to-digital conversion methods, and digital signal processing (DSP) techniques has created an opportunity for change.

The second challenge leads to a need for spectrum reuse. Programs such as DARPA SPAR (Signal Processing at RF) and needs defined by the NSC (National Spectrum Consortium) are calling for hardware advances that increase capacity within a single frequency band. US DOD is now advancing new concept of spectrum sharing where disparate systems like communications, radar and electronic warfare will now be able to share the share the same spectrum because of emergence of recent technologies in radio communication. Until recently, spectrum allocation (i.e., a certain frequency band is assigned exclusively to a certain electromagnetic wave emit-ting technology like radar or wireless communications) was vital to prevent any interference among diﬀerent systems.

DARPA launched  CONCERTO program  in 2016 with the goal  of designing, realization, programming, and control of a new converged RF architecture supporting all critical uses of the RF spectrum over a tactically useful performance range. System prototypes will be designed and developed for compact unmanned aircraft systems (UAS).

Dominance of the radio frequency (RF) spectrum is critical to successful U.S. military operations. Today, we do this using discrete radar, electronic warfare (EW), and communication payloads that are separately designed, procured, and integrated on platforms. These payloads typically use dedicated apertures, are realized with tightly coupled hardware and software, and are not well-coordinated in their use of spectrum. This rigid and constrained approach makes it difficult and time-consuming to adopt new technology, adapt to rapidly changing adversary threats, maneuver functions effectively in spectrum, and create comprehensive compact RF systems. Finally, such converged, flexible, multi-function systems are accompanied by an overwhelming growth in the number of options due to the anomaly of cheap complexity. 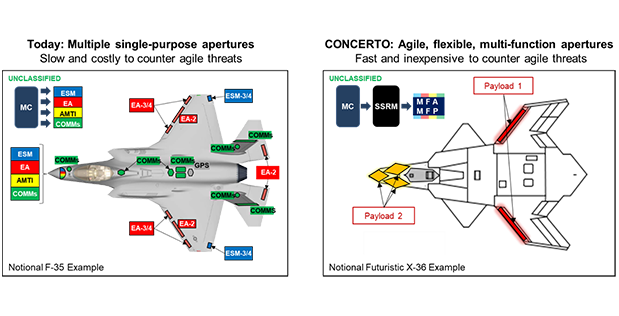 CONCERTO will capitalize on these trends to resolve current multi-function challenges, and open the door to fundamental change in our approach to RF systems that moves beyond traditional notions of radar, EW, and communications to create an adaptive, flexible and converged RF systems approach.” “CONCERTO will develop and test a scalable converged RF payload suitable for a Group 3 UAS. The payload will demonstrate its unified characteristics in a flight test including EW, radar, and communications functions and demonstrate efficient, adaptive function execution.

The CONverged Collaborative Elements for RF Task Operations (CONCERTO) program represents the ultimate software defined RF tile for Mosaic Warfare. The program addresses these challenges by developing a modular architecture for adaptive, converged RF systems to realize intelligent control of converged RF payloads supporting radar, EW, and communications simultaneously. The CONCERTO systems under development realize multi-function operations in less space and power than the combined collections of discrete systems, maximize the use and overlapping capabilities of common apertures, and speed technology migration by decoupling hardware from software and firmware.

CONCERTO is developing a multi-objective resource management system to intelligently coordinate RF mission goals in spectrum, space, and time to maximize the effectiveness of multiple complementary converged payloads. Leveraging the latest Reinforcement Learning and Genetic Algorithms, the CONCERTO resource manager is able to efficiently distill the vast option space in real time dramatically outperforming the traditional greedy approaches. Finally, the modular architecture is also scalable across a range of platforms and will be demonstrated on third party payloads in a flight test at the conclusion of the program.

The program, moreover, will demonstrate this converged RF approach in an RF payload that fits aboard medium-sized unmanned aerial vehicles (UAVs) that weigh less than 1,320 pounds like the AAI RQ-7 Shadow, or the Boeing Insitu RQ-21 Blackjack.

The payload will incorporate several elements including:

An RF front end including radiating aperture and its airframe integration;
A heterogeneous RF processing engine implementing operating modes in a portable hardware agnostic manner (the RF Virtual Machine); and
A multi-objective management system to intelligently coordinate and optimally achieve disparate mission objectives of a converged system.”
There will be four technical areas to CONCERTO:

For our part of the project, we’ll focus on maximizing the RF capabilities of the hardware (i.e., bandwidth, frequency, distance, and field of view) to ensure that all missions can be accomplished from the same components. BAE Systems is also developing a flexible, virtual RF processing engine that can be reconfigured to quickly support diverse and simultaneous operating modes. As processing technologies become increasingly diverse, our virtualization technology can provide adaptability and scalability to a variety of platforms.

Under two recently awarded contracts from DARPA (the Defense Advanced Research Projects Agency) worth a combined $5.4 million, BAE Systems is developing technology that will enable compact UAS to conduct multiple mission tasks with single, multifunction payloads that can adapt to changing battlefield situations and mission needs in real time.

Phase 3 work, to be conducted over a 21-month period of performance, will further mature and advance Perspecta Labs’ RF resource manager, including management of diverse third-party RF payload hardware. The company will also demonstrate the capability, scalability and agility of its solution in flight tests on a UAV platform to enable technology adoption by other programs of record. The additional contract modification supports a six-month effort to develop distributed extensions of the solution.

References and Resouces lso include: